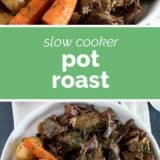 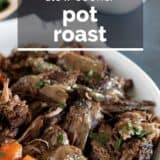 Sunday supper has never been so delicious! This Slow Cooker Pot Roast gives you perfectly tender beef, tasty (not mushy!) vegetables, and the most delicious gravy ever.

I am always looking for more Sunday supper ideas, and nothing screams sitting around the table on Sunday evening more than a pot roast! For even more ideas, check out this Beef Tips and Gravy, Chicken Pot Pie, or this Traditional Meatloaf with Brown Sugar and Ketchup Glaze. 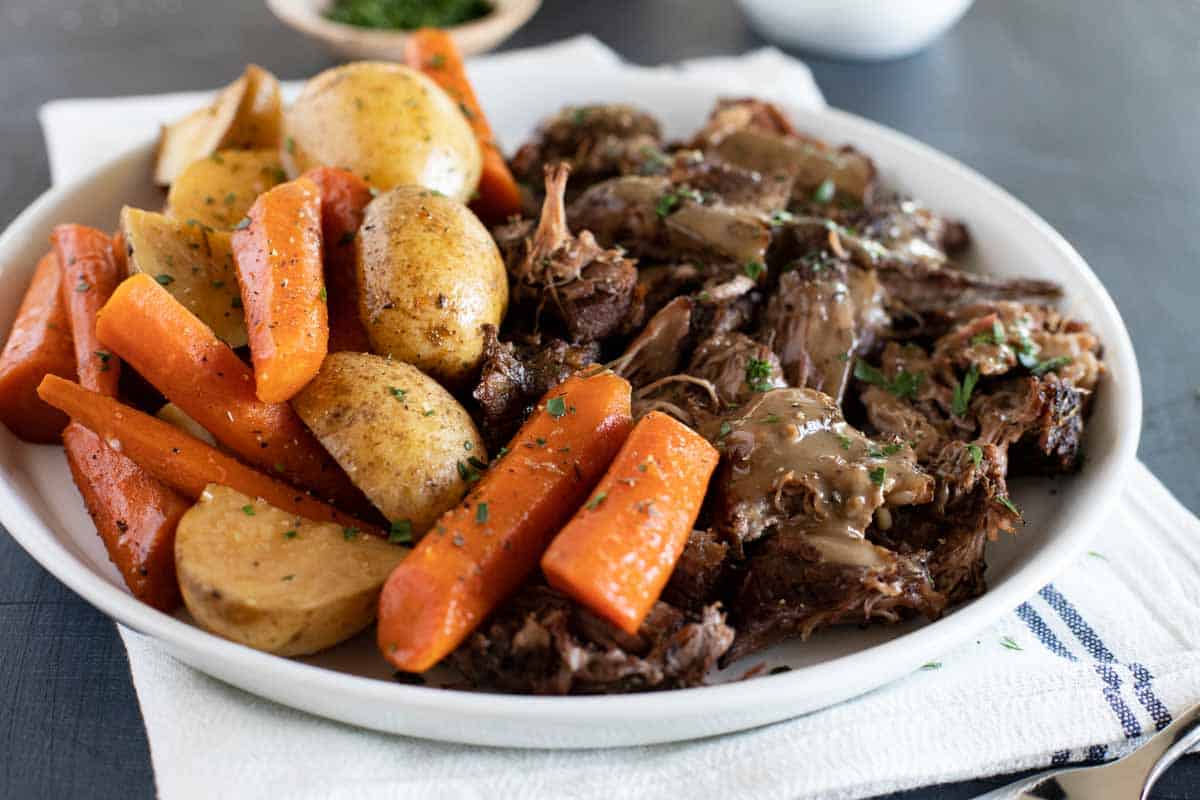 I think it’s obvious that I love food. And judging from all of the recipes that I’ve posted here, you can tell that I love to try new recipes. Throw in all of the cookbooks, food magazines, printed recipes, bookmarked recipes and my little recipe box at home – there are definitely more recipes than an individual could make in 10 lifetimes.

So here’s the dilemma – and if you are anything like me, you will feel the same – what happens to those recipes that you try and absolutely love? Do you really go back and make them again, or are you always trying out that new recipe that you’ve come across??

As much as I love trying new recipes, there are a few recipes that really are worth coming back to. Usually they are the ones that are splattered with remnants of the times you’ve made the recipe – like my recipe card for this recipe. This is my absolute favorite recipe for pot roast. On the recipe card, it’s even labeled “Yummy Roast”.

I was craving a good pot roast a little while back, and realized that it had actually been quite some time since I had made this recipe. So I decided to get in and re-test and perfect it so that I can share this new, revised recipe here. And let me tell you – I think this could even convert a non pot roast lover!

But don’t think about skipping the gravy – it may be the best gravy that has come out of my kitchen! 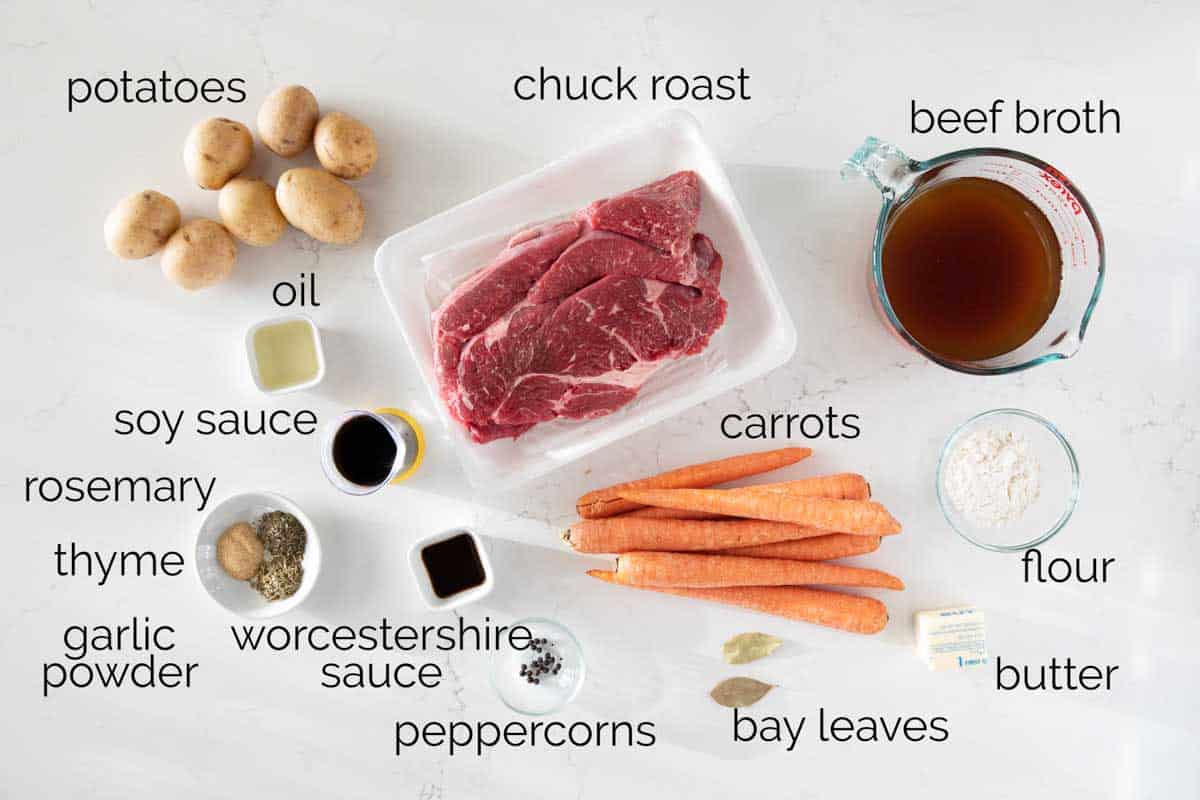 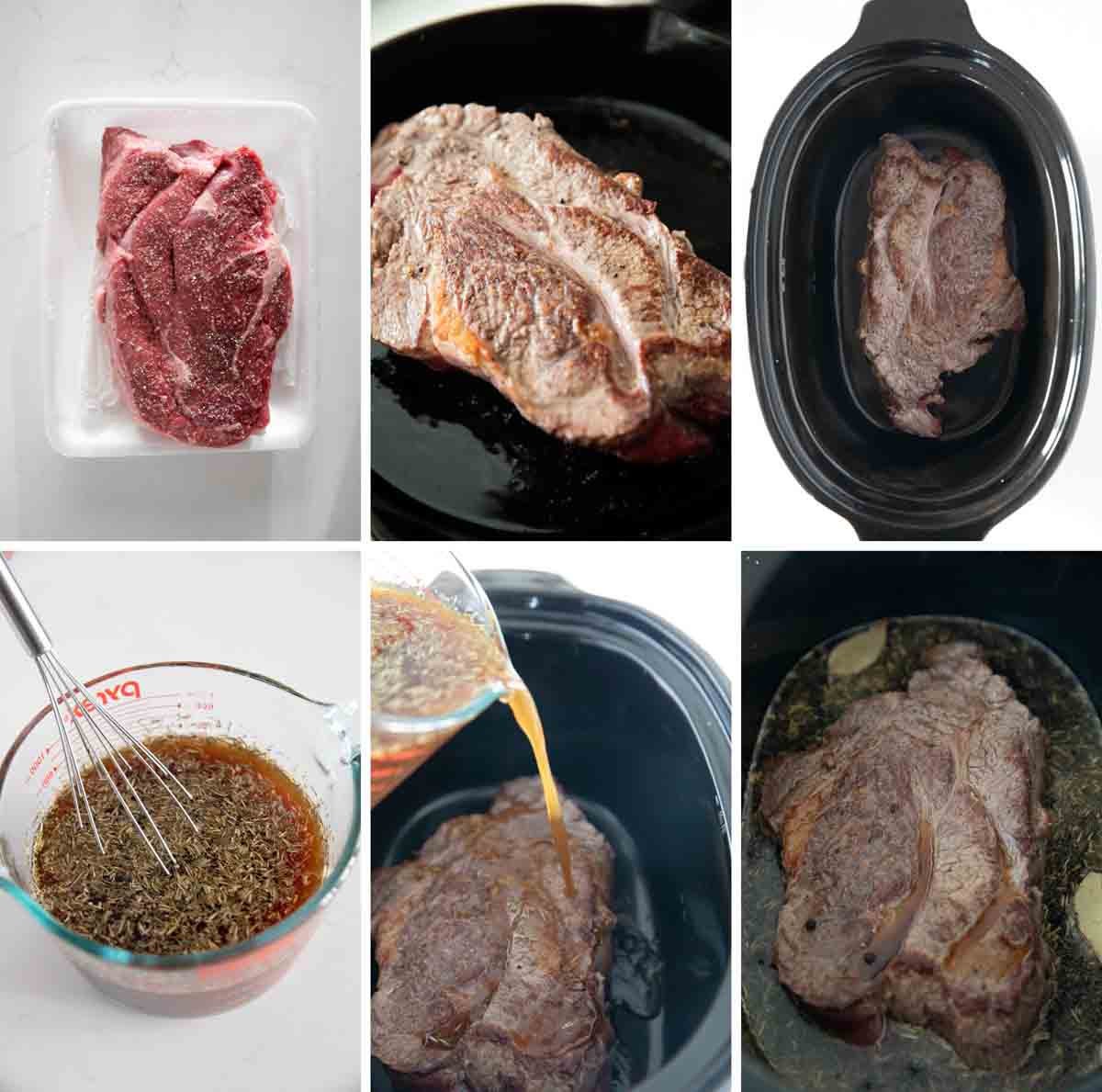 1: Generously salt and pepper both sides of the meat.

2: Heat the oil in a skillet, (I like to use cast iron), and sear the meat on all sides.

3: Place the meat in the bottom of your slow cooker.

5: Pour this mixture in with the meat.

6: Add the bay leaves, place the cover on, and cook for 3 hours. 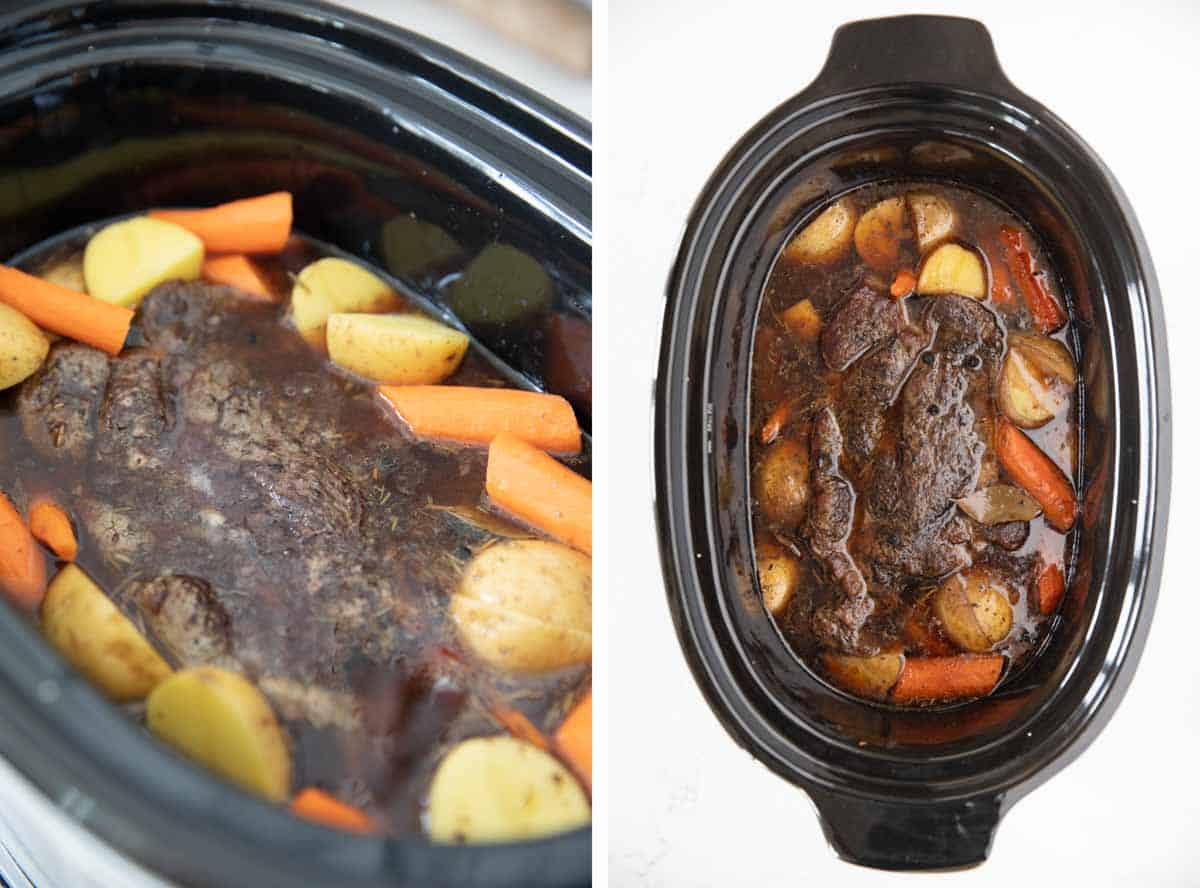 7: After the meat has been cooking for 3 hours, add the potatoes and carrots around the sides of the meat.

8: Replace the lid and cook for another 4-5 hours, or until the meat and vegetables are both tender.

9: Remove the vegetables with a slotted spoon to a bowl. Take the meat and transfer it to a cutting board.

10: Skim off any fat and discard, and strain the liquid that is left in the slow cooker into a large measuring cup. (You want to strain it through a sieve to catch any peppercorns and the bay leaves.) Measure out 2 cups of the cooking liquid and discard the rest. 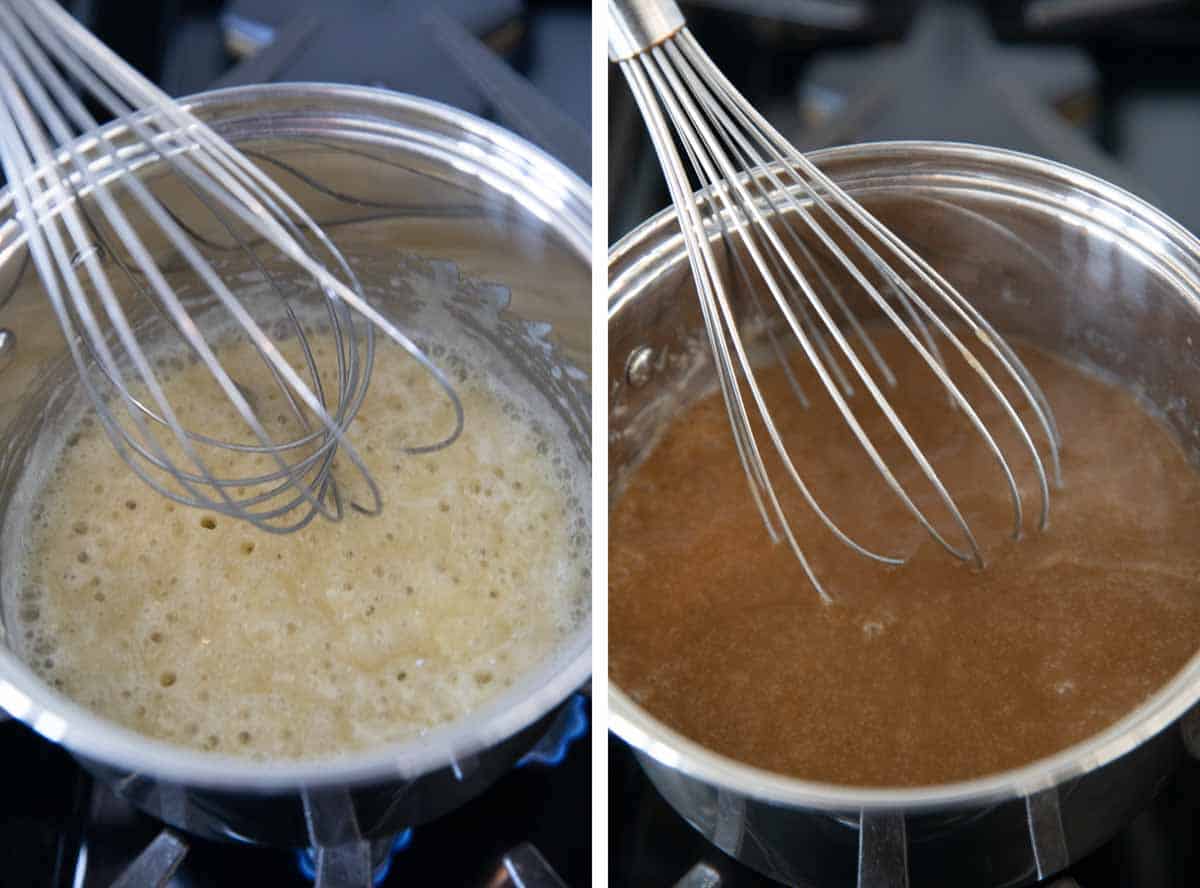 11: In a pot, melt the butter, then whisk in the flour and let it cook for a couple minutes.

12: Whisk in the 2 cups of the cooking liquid. Continue to cook until the gravy has thickened slightly.

13: Break the meat into chunks, and serve it all with the gravy. 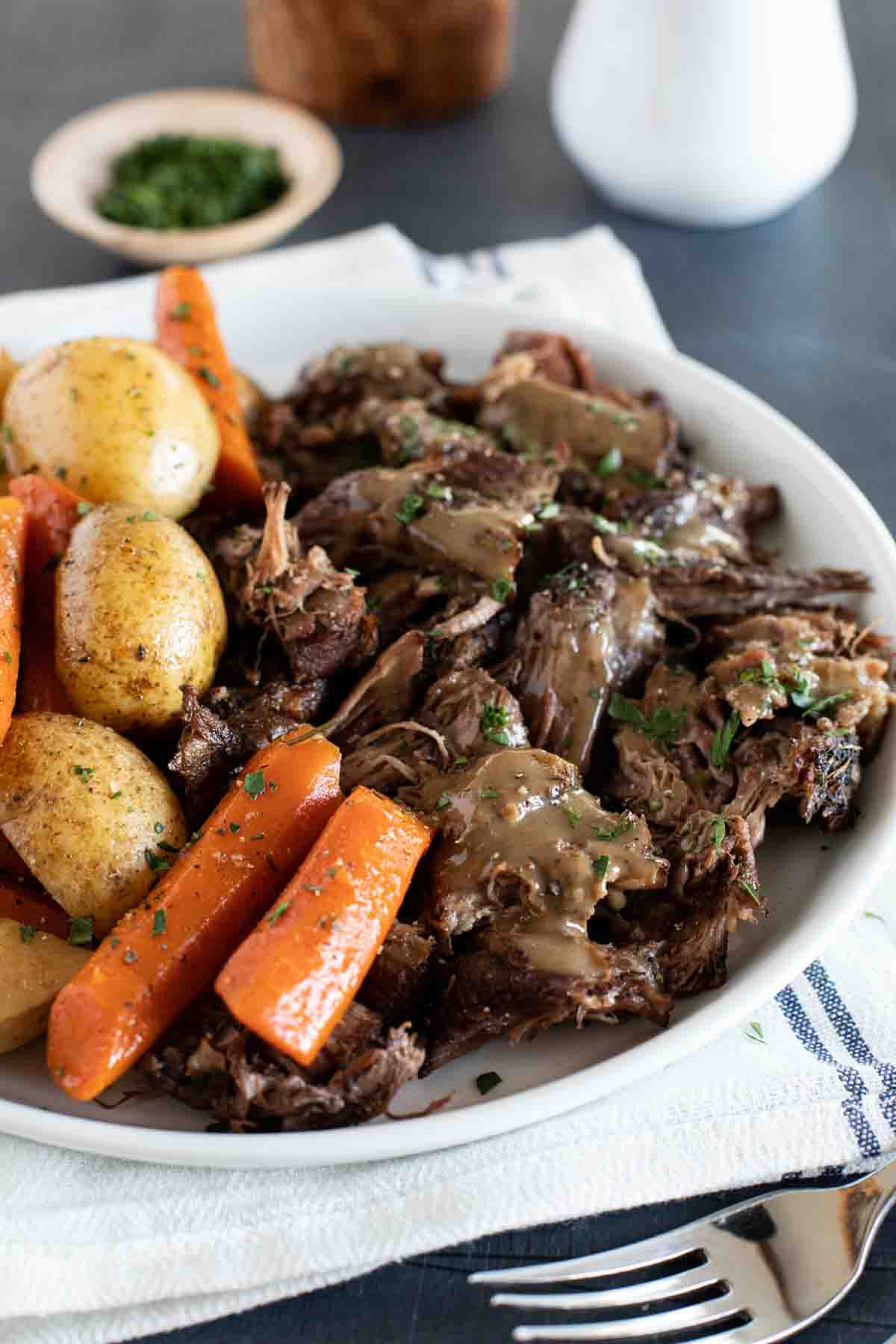 The first time I tested this pot roast, I placed the veggies on the bottom of the slow cooker and the roast on top of the veggies. The vegetables ended up mushy after cooking in the liquid, and the roast was not very tender. It wasn’t until I put the roast down in all of the liquid that I ended up with perfectly tender meat. You are essentially braising the meat, which is what gives it the best, tender, moist meat.

If you want more of a set it and forget it meal, you can add the vegetables at the beginning. Just make sure to place them around the meat. They may be a bit more mushy than if you add them part way through the cook time, but sometimes the ease is worth it.

Back in the early days of making this recipe, I would sub in some apple cider for some of the beef broth. And it was delicious!

I have also added in frozen pearl onions and we really love those. 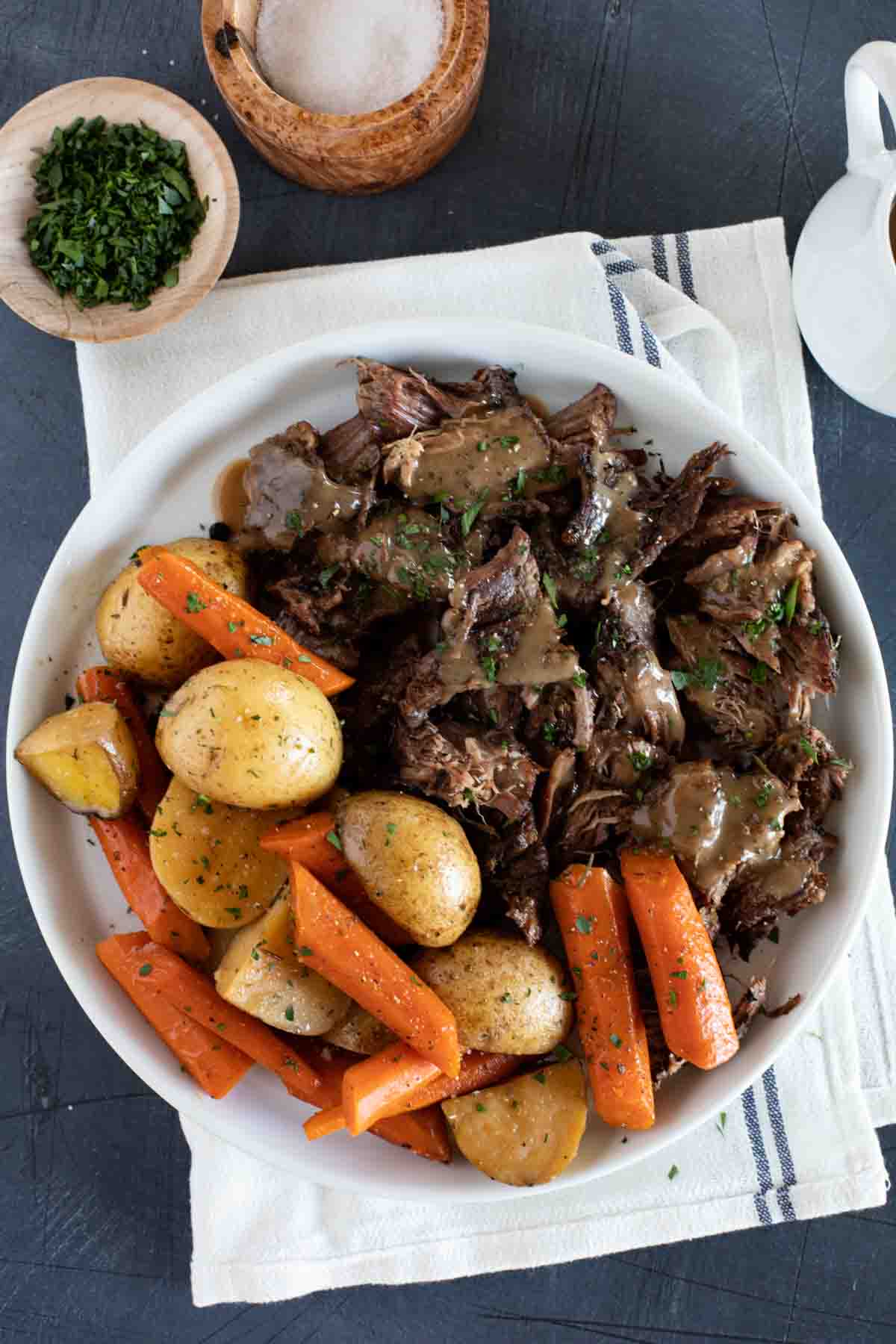 Do you have to brown the roast before putting it in the crock pot?
Technically, no. But it adds so much more flavor and improves the texture, so I think it is a step worth taking.

Can you use water to cook a roast?
Again, yes you can, but not if you want the best results! I like to use beef broth, especially since I like to make gravy once the pot roast is done cooking.

What internal temperature do you cook a pot roast to?
For fall apart tender meat, you’ll want to cook the roast to between 190ºF and 200ºF. If you don’t have an instant read thermometer, you can take a fork and twist it in the meat. If the meat easily comes apart, the roast is done.

Why is my pot roast tough?
If the roast is still tough, it probably needs to cook longer. It could also be because of the cut of meat you are cooking. A chuck roast will give you the most tender pot roast. 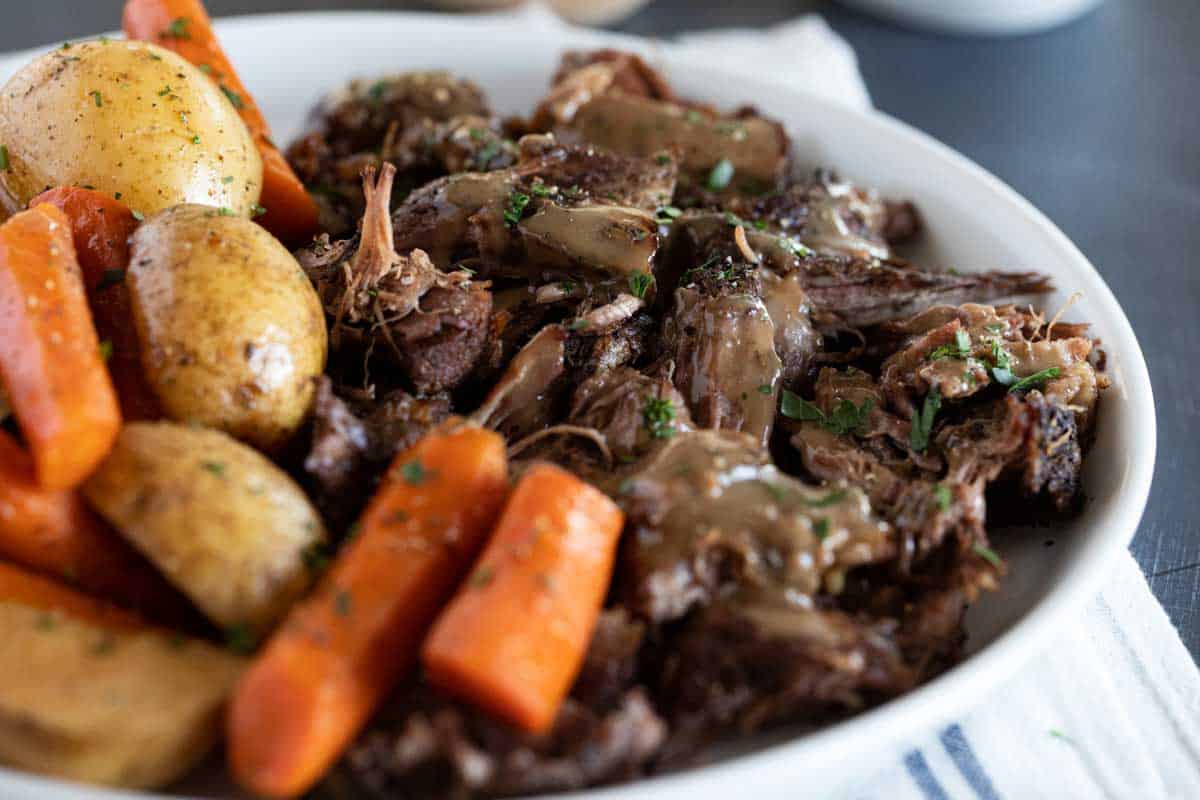 Sunday supper has never been so delicious! This Slow Cooker Pot Roast gives you perfectly tender beef, tasty (not mushy!) vegetables, and the most delicious gravy ever. 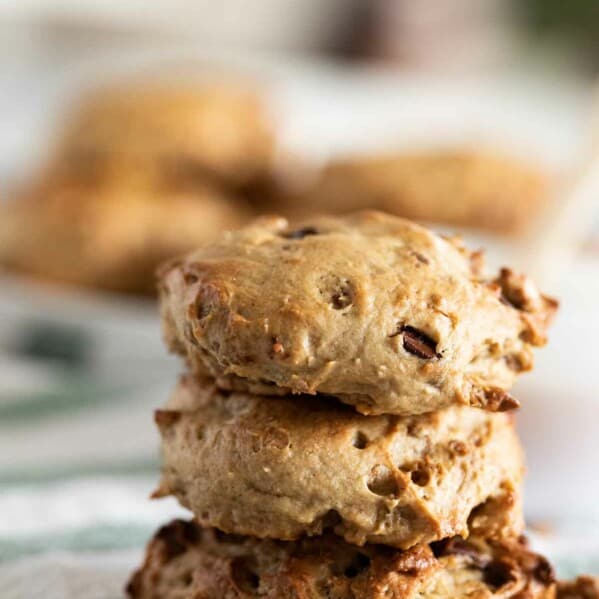 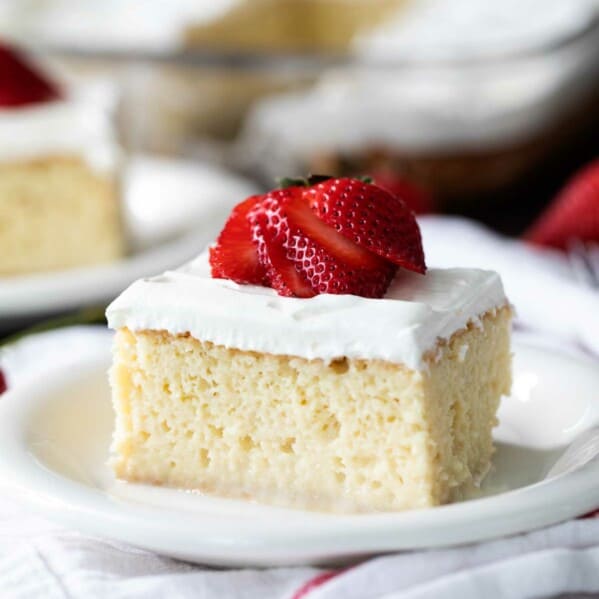