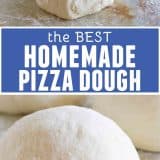 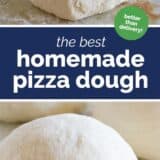 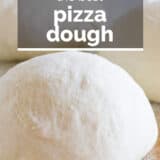 And then, back in 2011, I tried the pizza dough recipe from Artisan Pizza and Flatbread in Five Minutes a Day. And I was pretty sure I had finally stumbled onto *that* recipe. If you haven’t tried that recipe, you really should, because it really does rank up there with the best of the best.

The problem with that dough, though, is that it is best when it has had some time to “age” in the refrigerator. And, well, while I am a stickler for a menu plan, I rarely stick to the order on my menu plan, often making what sounds the best on any given day instead of the actual meal planned for that day. And if I had endless refrigerator space, I’d keep some of that dough on hand always, but that’s not the case either.

So even though I adored that recipe, I knew I needed a recipe that could be made the same day. It would just work better for my family.

That’s when I tried a recipe from Budget Gourmet Mom (unfortunately, her blog is no longer online). It was the best pizza dough that I had come across. I made it many times, and claimed that it was my new favorite. But over the past couple of years, I have, at least in my opinion, perfected the method of making the best pizza you will have at home.

I don’t say this lightly. I’m not kidding you when I say I’ve made this recipe dozens and dozens of times.

The Secret to the Best Homemade Pizza Dough

The secret is in how much flour you add to the dough. This is where I get a little unconventional, because the ingredients are all pretty normal. But my #1 thing that I have said for years with bread making is that I think many times people fail and end up with dry, dense bread because they are adding too much flour. And when I thought about the pizza dough recipe from Artisan Bread in Five Minutes a Day, I thought about how wet that dough was, and how I never questioned it because I always did the ingredients by weight and just trusted.

So where this recipe differs from most is the amount of flour and the consistency of the dough.

I have included step by step photos below to walk you through it, but the most important step is to not keep adding flour until the dough is not sticky anymore. Sticky means you are doing it right in this recipe. (See – told you this was different. This goes against pretty much every other pizza dough recipe out there.) Don’t be afraid about the dough sticking everywhere when you roll it out. It’s not quite as sticky after it rises, and you’ll use some additional flour to shape it and roll it.

This recipe might not come easy the first or second time you try it. It’s one of those recipes that might take a little bit of practice. But believe me – for the perfect homemade pizza, it’s totally worth it.

How to make Homemade Pizza Dough

Whew!! That was a lot. 🙂 Here is the step by step – I hope you love this recipe as much as we do!

Voila! Your pizza dough is ready for baking. If the dough is still a bit sticky when you go to roll it out, just sprinkle on a little more flour. I like to actually use my hands to stretch the dough instead of rolling it, which helps with any sticking as well. But you’ll be surprise at how not sticky the dough is at this point.

Use the dough to bake up your pizza with your favorite toppings!

How to Bake Your Pizza

This dough can be used as a pretty generic pizza dough – so you can use it with any pizza recipe you want. (I’ve included some of my favorites below!!) If using another recipe, you can just follow the instructions from that recipe.

But if you want to just bake a basic pizza, topped with your toppings, this is how you would do it.

**Note: some people like to bake the crust without toppings for a few minutes first, then remove and top before returning the pizza to the oven. If you like an extra crispy crust, this is what you’ll want to do.

Do I have to have a mixer to make this pizza dough?
No! Many people have made this with just a bowl and spoon. It will take a little bit of muscle, but is totally doable. I wouldn’t suggest using a hand mixer – if you don’t have a stand mixer, just mix it by hand.

Can I freeze any extra dough?
Yes! This dough freezes very well. I like to freeze it in individual balls and then take them out one at a time to use. I just let it defrost in the refrigerator.

Do you have the weight measurements for this recipe?
The one reason I don’t like to use weight measurements for this recipe is that external circumstances can always change how much flour you’ll need. I’ve made this recipe many, many times, and the amount of flour I use is never the same. Sometimes I’ll use the full 6 cups of flour, and sometimes it’s as much as a half a cup less. I think going by texture gives you the best results.

That being said, I had a wonderful reader named Steve who emailed me after he figured out the weight equivalents. So I will list his weights here:
590 g water @ 85 degrees
50 g sugar
9 g yeast (3 teaspoons) (not really necessary to convert this is it is a small number)
54 g of vegetable oil
12 g of salt
720 g of flour

Do you have to knead the dough?
I don’t! I just mix it until it is well mixed. I haven’t noticed a difference if I knead it for longer or just mix it up.

I use a bench scraper to cut the dough and to clean the flour off the counter. I love it!
I highly recommend a pizza stone for baking your pizza. It really makes a big difference in the final pizza!

*This makes 3 1-lb balls of dough. It’s a lot, but I usually make 3 pizzas (we’ll eat 2, and save the third for leftovers). Most recipes call for a 1 lb ball of dough, but in all honesty, we usually like our pizza a little more on the thin side. So I have halved this recipe and made 3 pizzas, or I will make 4 pizzas from this recipe. It is easy to halve, so feel free to do so. Also, not everyone’s mixer has the capacity to make this much dough. Use common sense. 🙂

*I usually make my dough a couple of hours before I need it and just refrigerate the dough until needed. It’s a little easier to roll out when it’s not super cold, but straight from the fridge still works. I recommend making it within 24 hours, though, as the dough will continue to rise, even in the refrigerator.

*When it comes to baking your pizza, I always recommend using a pizza stone. They are pretty inexpensive and make a huge difference. I bought mine at Bed Bath and Beyond for $20 years ago and have probably used it over 100 times and it is still going strong. I always preheat the oven for at least 30 minutes with the stone inside on a high temp. I also use parchment paper when baking my pizza because 1) my husband doesn’t care for the cornmeal on the bottom of the pizza, 2) I’m terrible and transferring the pizza from the pizza peel to the stone. Parchment paper works well for me.

Nutrition information provided as an estimate only. Various brands and products can change the counts. Any nutritional information should only be used as a general guideline. Nutritional counts do not include toppings. 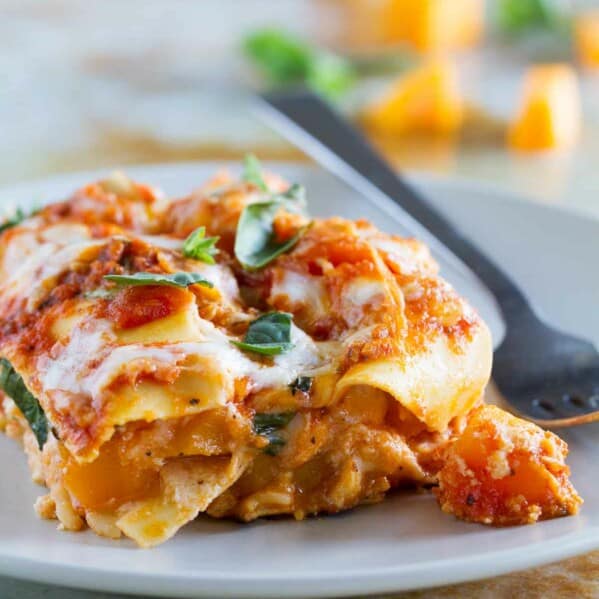 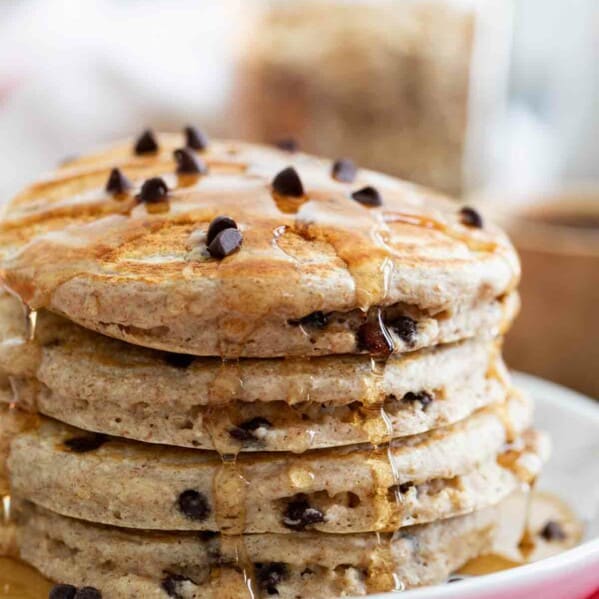 Saving this as my go to recipe!

Thank you so much for this recipe and the instructions! I love being in the kitchen and making new things, but pizza dough has always been a struggle! Leaving the dough sticky was wonderful advice and it made a very delicious pizza. Saving this as my go to recipe! Thanks again!

The BEST pizza I’ve ever made!!!

I’m second gen Calabrese Italian and this is the BEST pizza I’ve ever made!!! Love love love the crust it makes. Seriously can’t stop eating it. The bottom was crisp, the crust pillowy soft with the perfect chewy bite. My boys and I are in pizza heaven! I used the sams club members mark bread and pizza flour, olive oil instead of veg oil and baked on cookie sheets in a 450 oven. The dough stretches out so easy, no need to roll out. Perfection!!!! Thank you!!

After many failed attempts with pizza dough……

After many failed attempts with pizza dough…… This recipe was perfect!!!! I’m very picky when it comes to pizza, and this is now my go to recipe! Thank you so much!!!

Thank you so much for sharing this recipe!!!

This is truly a fantastic recipe for pizza crust. In my 46 years I’ve tried an untold number of pizza dough recipes only to encounter varying levels of disappointment with each recipe I would try. I hadn’t made homemade pizza for a couple of years, but thought I’d give it yet another try with a different recipe… yours. With the oven cranked up to 550° and smoke detectors screaming, we made our pizzas and watched them bake. We were impressed with how the crust looked as it was baking and were even more impressed with the texture and flavor (I did add some seasoning to the dough during the mixing process). Thank you so much for sharing this recipe!!! Know that it will be enjoyed in our home on Friday nights for years to come. And this recipe will go into the collection of recipes I am making for my son and three daughters. Yup, it’s that good.