A sponge cake is surrounded by a strawberry Bavarian cream and topped with a strawberry “mirror” in this impressive Strawberry Mirror Cake. 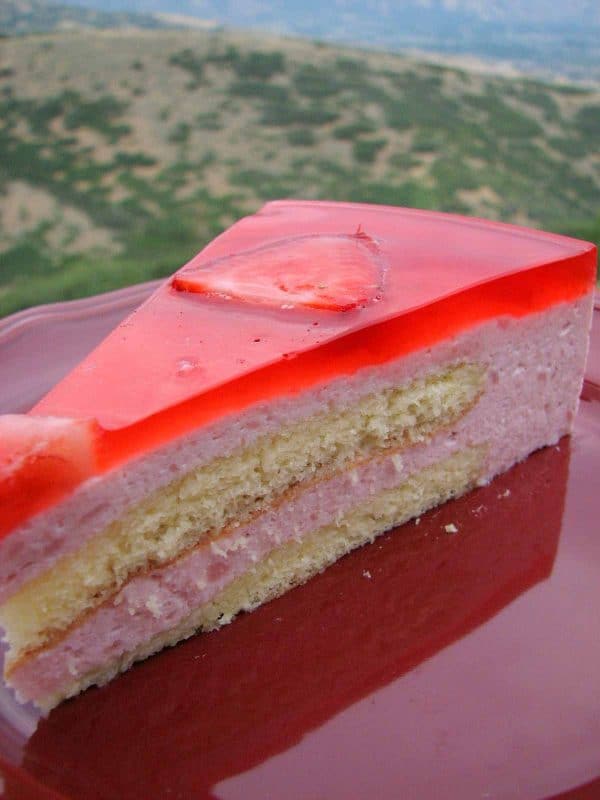 This is my first challenge as a daring baker, and it really was a fun one!!

And since I have a few friends and family members that read my blog that don’t frequent other food blogs, here is a little bit of history….

So without any further ado, this months challenge…..

I had never had a strawberry mirror cake before, in fact, I don’t think I had ever heard of one before. I was really excited to try something new. I was going to make it at the beginning of the month, but put it off for a bit because of my hubby’s birthday and other things that were going on. I decided that I had the perfect opportunity to make it for my family’s once-a-month get together. In fact, I’ve decided that my family might be getting the fruits of my daring baker labors every month when we get together. Who else would be the perfect guinea pigs that would give me honest opinions??

I read through the recipe multiple times, then headed to the store to pick up the ingredients I would need. Unfortunately, I already knew that I wouldn’t be able to find any local, wonderful strawberries. Our season here was just past, and I had spent the weekend before running to multiple stores and fruit stands, trying to find the perfect strawberries to top my husband’s cheesecake, but I had no luck. So I settled on some beautiful strawberries that lacked a lot of flavor. I even purchased a 10-inch springform pan for the recipe so that I could make sure it was right, and I was finally able to find cake flour. Really, who thought it would be so hard to find cake flour??? I had already volunteered to bring a dessert to the above mentioned family get together, so I knew there was no backing out – especially since I had already told a few of my sisters about it and they were looking forward to seeing how it turned out. I was quite lazy the night before, and didn’t start until about 8pm.

Everything started out very smoothly. I used my new KitchenAid to whip up the cake, which was probably my favorite component of the dessert. It is a thin cake, baked on a jelly roll pan, and then the two circles of cake that you use are cut out of the sheet cake. At first I wondered what I was going to do with all of the leftover cake scraps, but after tasting it, I knew it probably wouldn’t last long. I kept snacking on pieces while I made the cake (I needed the energy to keep me going, right?!?) and I finished them off the next day while I was making the mirror for the cake. (It was super tasty with the strawberry mush that was left over while making the mirror the next day!!)

Then came the strawberry Bavarian cream. This was my first time making a Bavarian cream, and although it wasn’t a complete success, or failure for that matter, I did learn a lot!! You first have to sprinkle gelatin over strawberry puree. I’ve used gelatin before, but this called for 2 1/2 tablespoons!! That seemed like a lot, but I went with it. I continued with the recipe, making the custard-like sauce. Everything went smoothly until I tried to stir in the gelatin/strawberry puree mixture. LUMPS GALORE!! I didn’t know what to do!! I tried to squish as many as I could against the side of the bowl, but there was no way I was going to get rid of all of them. (The next day I posted an entry on the daring bakers blog (a spot for us to discuss the recipe) and many other said they had the same problem, but just strained the mixture to get rid of the extra balls. I wish I would have thought of that!!) And then you are supposed to stir the mixture in a bowl over a bowl of ice water, but of course we didn’t have any ice because our freezer is so stinkin’ full, and it was too late in the recipe to run out and get some. So I tried to improvise, sticking some ice packs in the bowl of water, but that didn’t really work. So I stuck it in the fridge, stirring it every couple minutes – which is probably another reason I didn’t get rid of all of those little balls of gelatin.

I continued on with the recipe without any problems – assembling the cake, I didn’t have any issues. Some had said that they ran out of room in their pan and couldn’t use all of the Bavarian cream, but I had tons of room to spare. The only modification I made (which was an allowed modification) was to leave the alcohol out. Into the fridge the cake went – and a look around the kitchen – now aka “war zone” – told me that I wasn’t going to bed quite yet. Lots of clean up later, I collapsed into bed along side my husband, who was already sound asleep thanks to the use of ear plugs!!

The next morning, before I started the mirror, I called my sister to see what time we were getting together, and told her that I would be making some cookies or cupcakes to bring as a back up. I was afraid that the gelatin balls would gross everyone out and that no one would want to eat my cake, but she told me that she had a birthday cake for her daughter, who’s birthday was that day. Thank goodness – the pressure was now off of me.

So I continued. I was a little afraid of the mirror, as it also calls for gelatin, but luckily, everything went really smoothly. For the strawberry juice, you are supposed to drain the crushed, simmered strawberries through a “damp jelly bag or a cheesecloth-lined colander”. Well, I don’t even know what a damp jelly bag is, and I didn’t have any cheesecloth, so I improvised again, using an dish towel set over a colander, where the juice dripped into a bowl. I am happy to say, this worked wonderfully! Then there was another step with an ice bath – what to do this time?? Improvising again, I knew the ice packs wouldn’t cut it, so instead of ice, I used some frozen peas! Perfection! So next time you are out of ice and you need it for an ice bath, frozen peas work in a pinch! I decided that the only decoration I was going to do would be to set some sliced strawberries on top of the cake with the mirror on top, so I did that and then poured the mirror mixture on top. I made sure to pour very slowly, as I didn’t want it splashing everywhere, making a mess and becoming uneven. I went on beautifully!! I carried it to the fridge and set it down, then poked some small air bubbles with my fingernail to pop them. The cake was done!!

When the cake was unveiled that evening, everyone oohed and aahed about how pretty it was. It really was a gorgeous cake. After taking pictures, I dug into my slice.

The family liked it – but when they heard that it took 3 hours to make, they said that it wasn’t really worth 3 hours of work. But really, it was a great experience, and a lot of fun to make. This is so different than anything that I have ever made before, so it really was a learning experience, too.

Thanks for the challenge Peabody!!

A sponge cake is surrounded by a strawberry Bavarian cream and topped with a strawberry “mirror” in this impressive Strawberry Mirror Cake.

To Make the Cake: 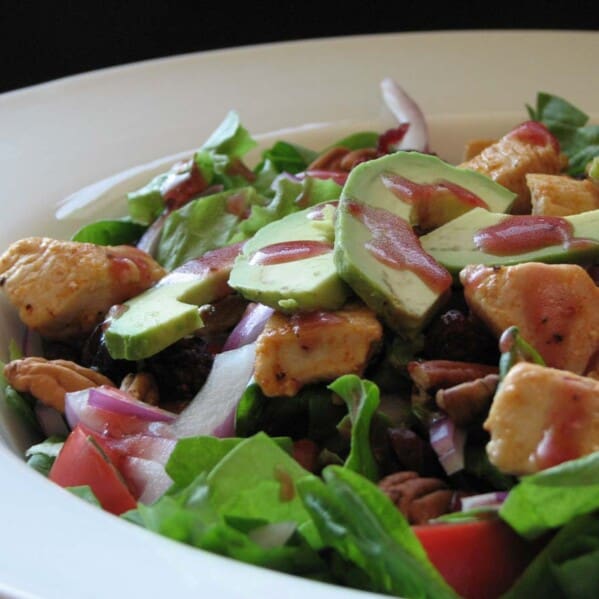 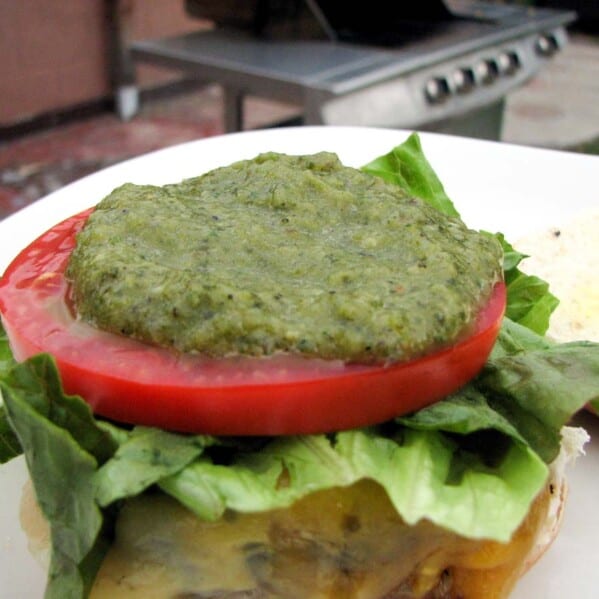