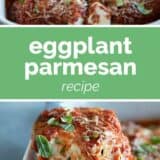 Breaded slices of eggplant, lots of cheese, and marinara sauce make up this Eggplant Parmesan that the whole family will love.

We love throwing in a meatless main dish every now and then, and this Eggplant Parmesan is one of the best! For more meatless mains, try this Baked Ravioli, Spinach Artichoke Spaghetti Squash, or Roasted Red Pepper Linguine. 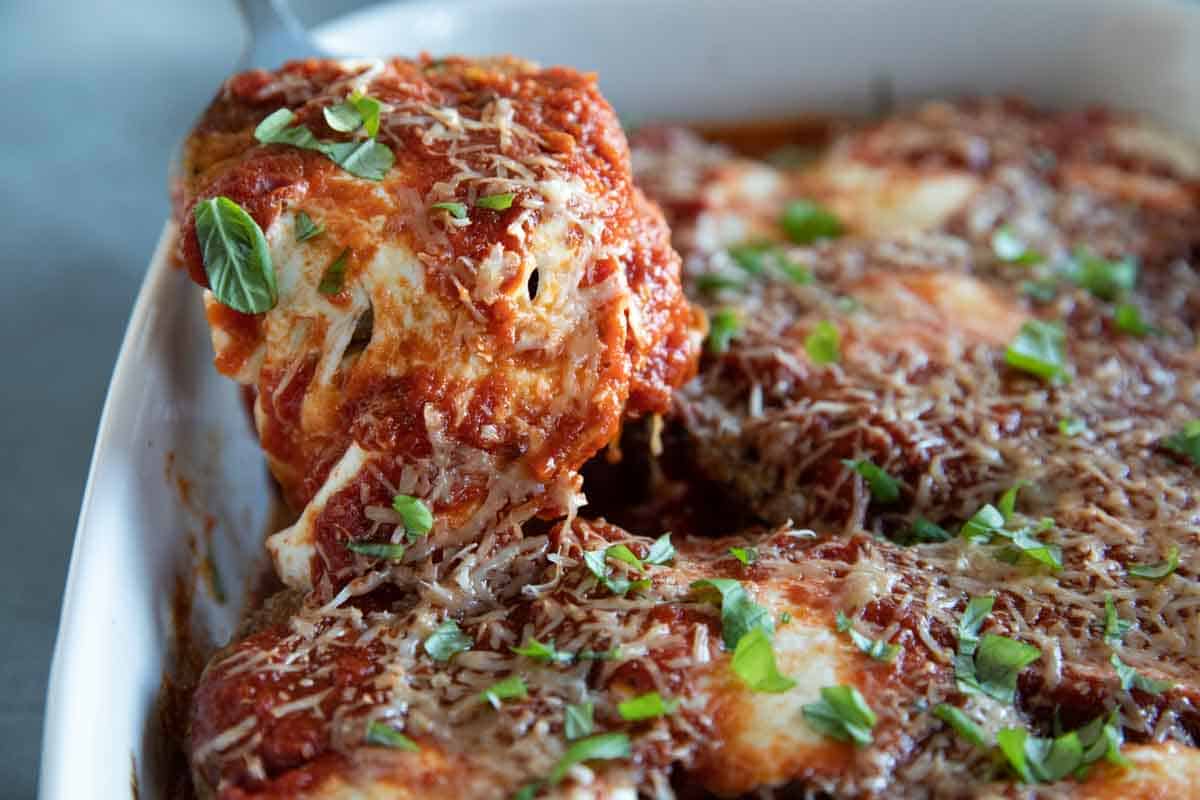 I have a family full of meat eaters. But I still try to incorporate a meat-free meal sometimes. And that is usually met with some resistance.

But this Eggplant Parmesan was not only eaten by every member of my family, but most of them went back for seconds.

That is when you know you have a winner. 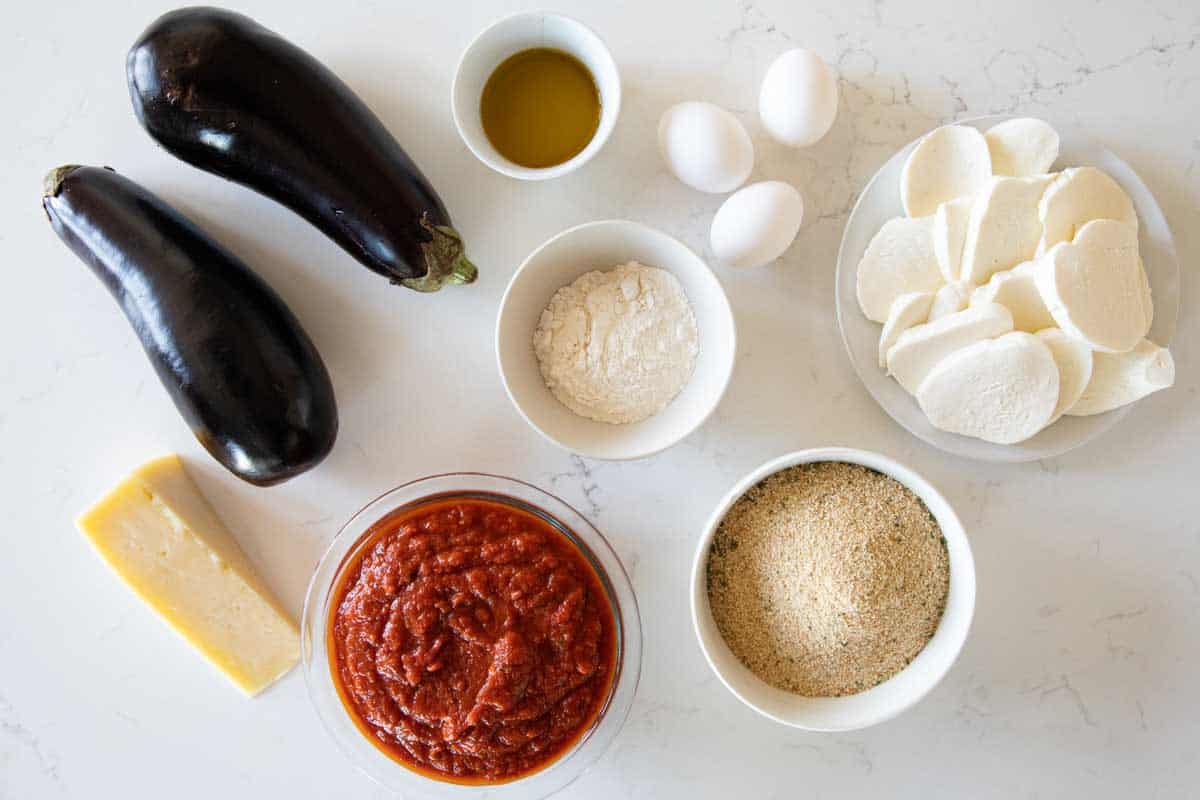 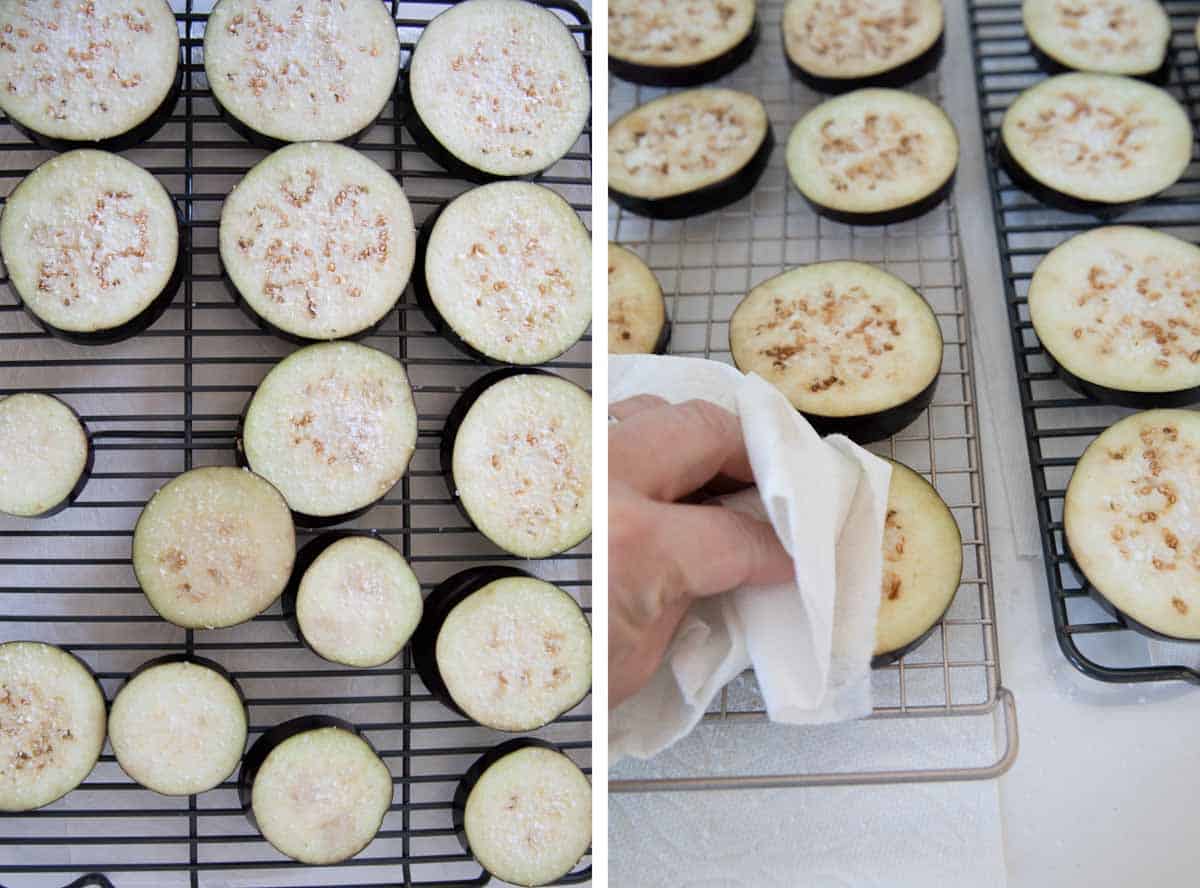 How to Make Eggplant Parmesan

1 – Slice the eggplant into 1/4-inch slices. Place them on a cooling rack and sprinkle both sides with salt. Let them sit for about an hour. (I like to put paper towels underneath to catch any draining liquid or salt.)

2 – Take a paper towel and blot off any excess salt and liquid. 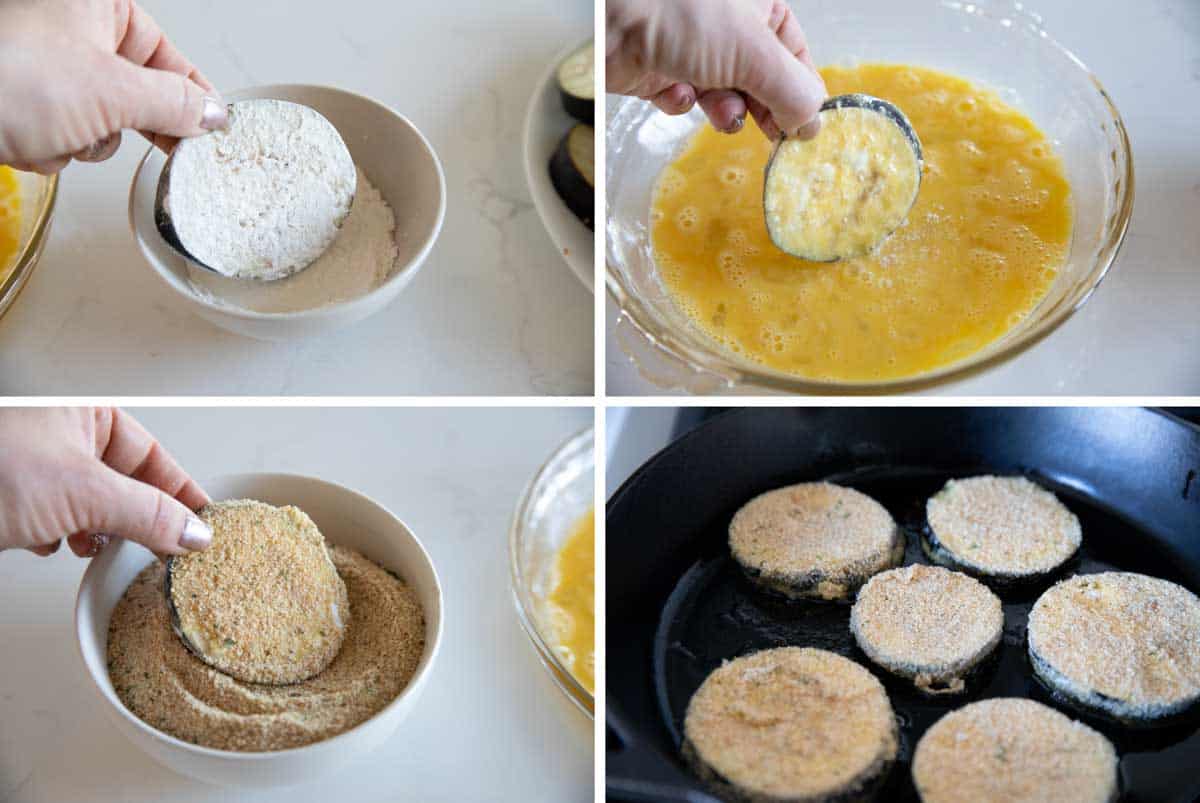 3 – Working with a slice of eggplant a time, dip the slice into the flour, lightly coating each side.

4 – Next dip the slice into the eggs.

5 – Now dip the eggplant into the breadcrumbs, coating each side well.

6 – Heat the olive oil in a skillet and cook the eggplant until golden brown on both sides.

7 – Now it’s time to assemble! Spread a layer of the marinara sauce in the bottom of a 9×13-inch casserole dish.

8 – Top with a layer of the fried eggplant. You want to keep it in one layer as best as possible.

9 – Layer on half of the mozzarella cheese.

10 – Then sprinkle on half of the parmesan cheese.

11 – Spread half of the remaining marinara over the top.

12 – Top with another layer of eggplant.

14 – Spread the remaining marinara on top.

15 – Last – sprinkle the remaining parmesan cheese over the top. Bake the casserole until the cheese is melted and the sauce is bubbling, then let it sit for about 10 minutes before serving. 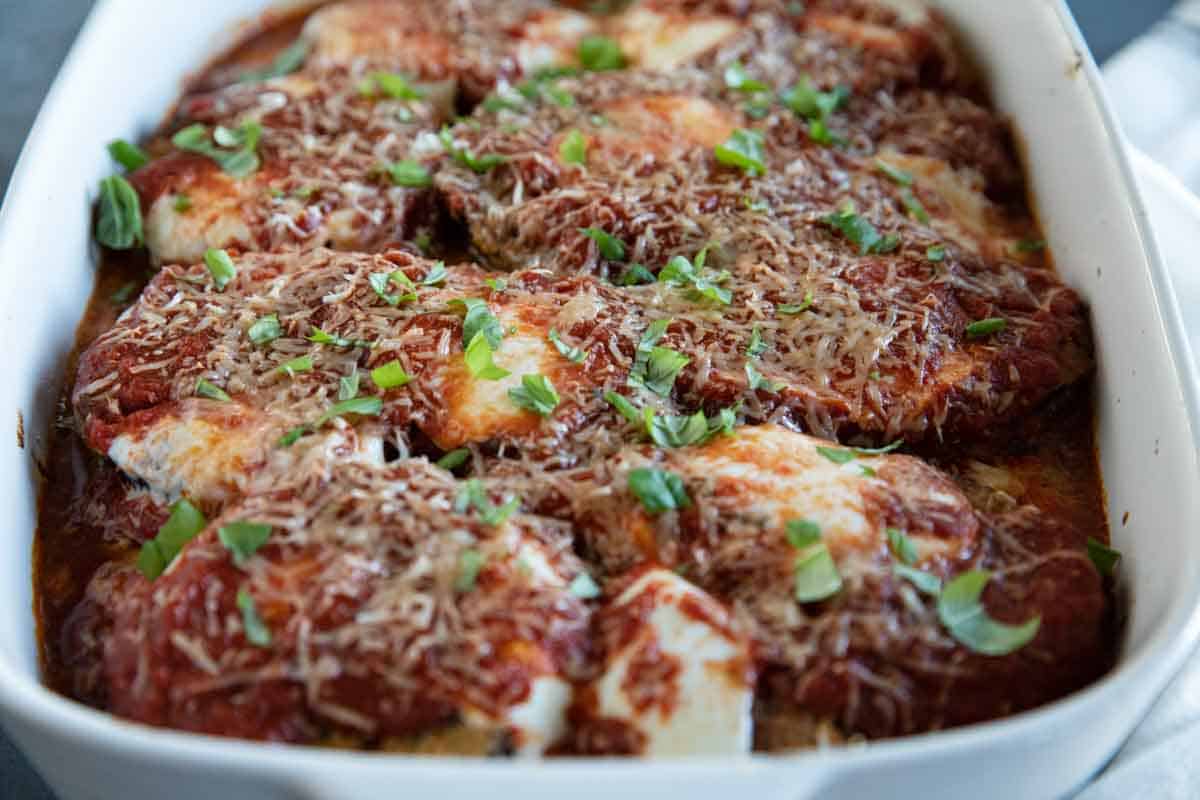 Do you have to salt the eggplant first? Technically, no. In fact, most eggplant today have had a lot of the bitterness bred out. But the older an eggplant is, the more bitter it will be, and sometimes, we just don’t know how long an eggplant has been sitting on the grocery store shelf. So I do it as a precaution. In order for the salting to make a difference, though, you can’t just salt the slices and then rinse them off. They need to sit a minimum of 30 minutes – I prefer an hour.

The eggplant can be peeled if desired. I like to leave the peel on for extra texture but I know sometimes it makes it a little harder to eat.

This is best served when it is fresh. The breading on the eggplant will get soggier over time, so I don’t like to make this ahead of time. I never turn the leftovers away, but they will be a bit more soggy than the fresh eggplant parmesan. 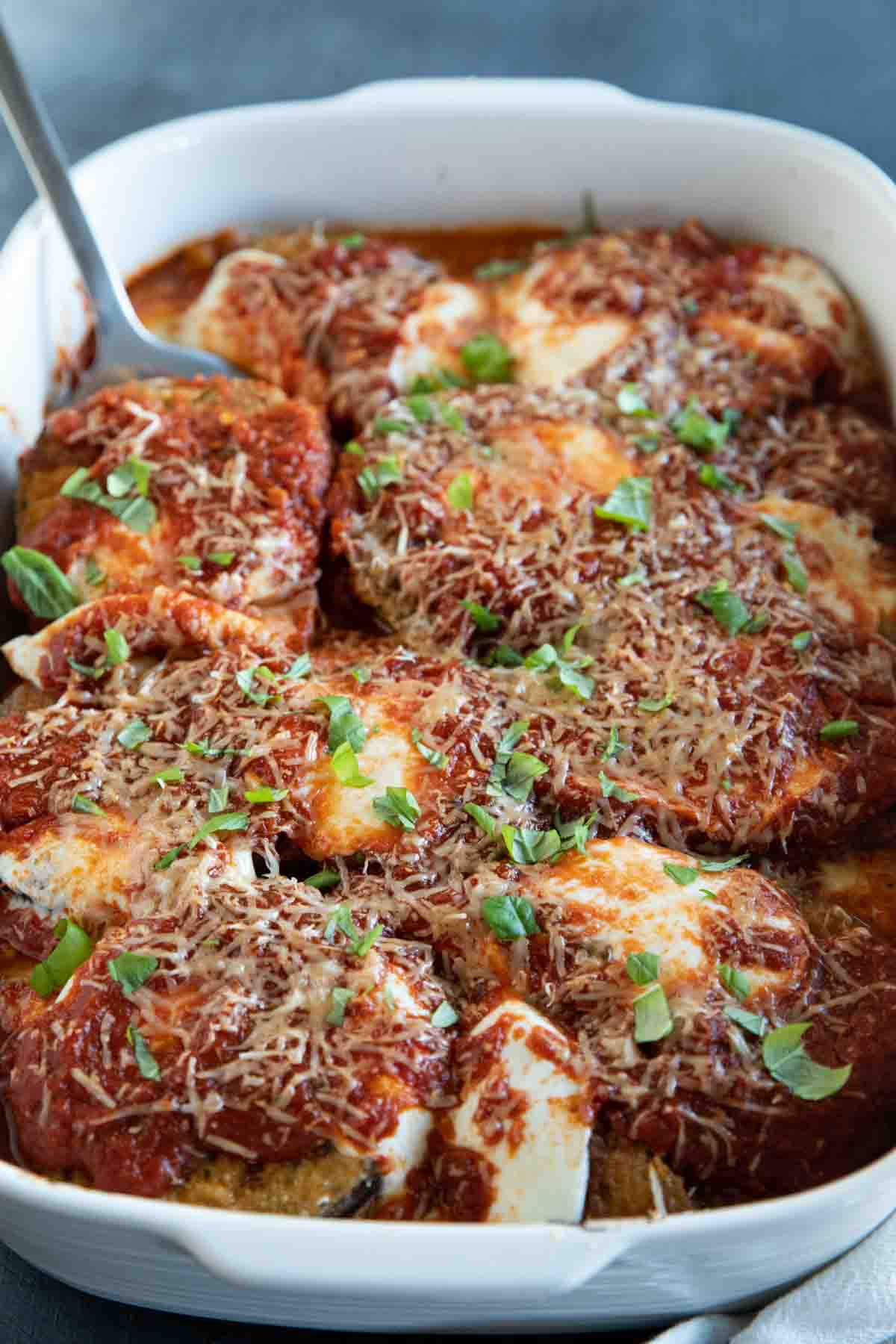 Breaded slices of eggplant, lots of cheese, and marinara sauce make up this Eggplant Parmesan that the whole family will love.

SUBSTITUTIONS: You can use shredded mozzarella instead of sliced, fresh mozzarella. Jarred marinara will work, but homemade makes it so much better!

STORE: Store any leftovers in the refrigerator for 3-5 days. You can reheat in the oven (covered with foil) or you can reheat individual portions in the microwave. It will be a bit more soggy as leftovers, but it is still delicious! 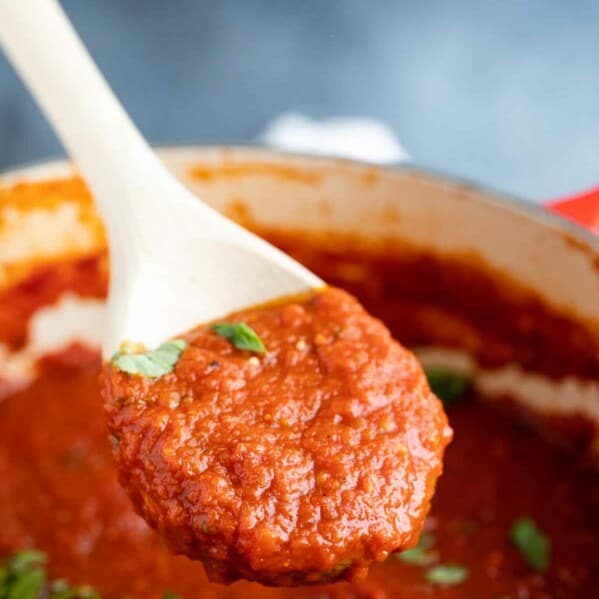 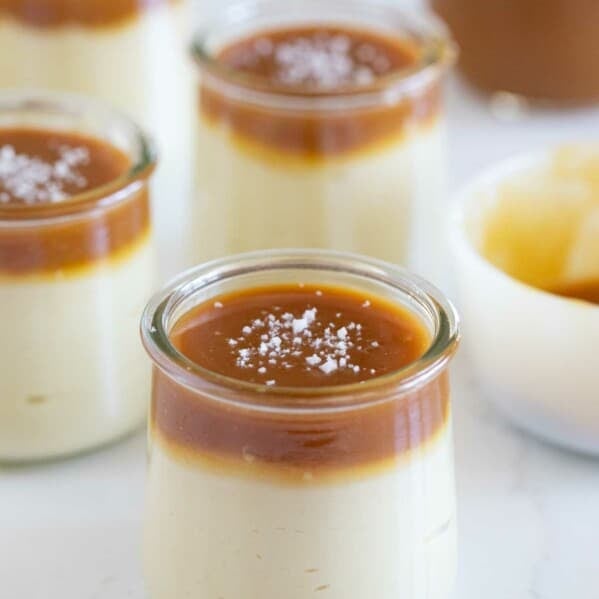