You’ve all had clam chowder, but what about this New England Chicken Chowder recipe? It combines your favorite New England chowder flavors like potatoes and bacon, but adds in crowd pleasing chicken. This chicken chowder recipe is creamy and comforting! 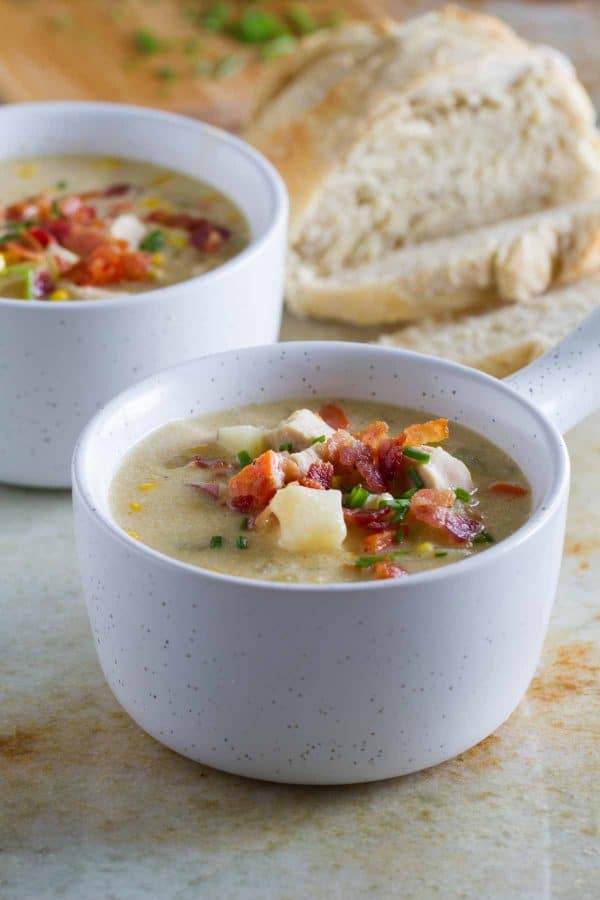 You guys, I am in the thick of it all right now.  We are closing on our new home this Friday, and by Monday, the keys will be ours.  I am overcome with excitement, but at the same time, I’m stressed about the actual moving part.  We have movers scheduled for next week, which means everything needs to be packed and boxed. You would think that now that my kids are getting older, it would be easier, but I keep thinking that it’s harder now than when they were smaller, simply because there are more responsibilities  3 different school schedules, homework, doctor appointments, and everything else that comes along with 3 kids.  Last week, I had obligations every single day of the week, and packing was practically non-existent.  So this means that this week I get to crack down because the time is really ticking now. 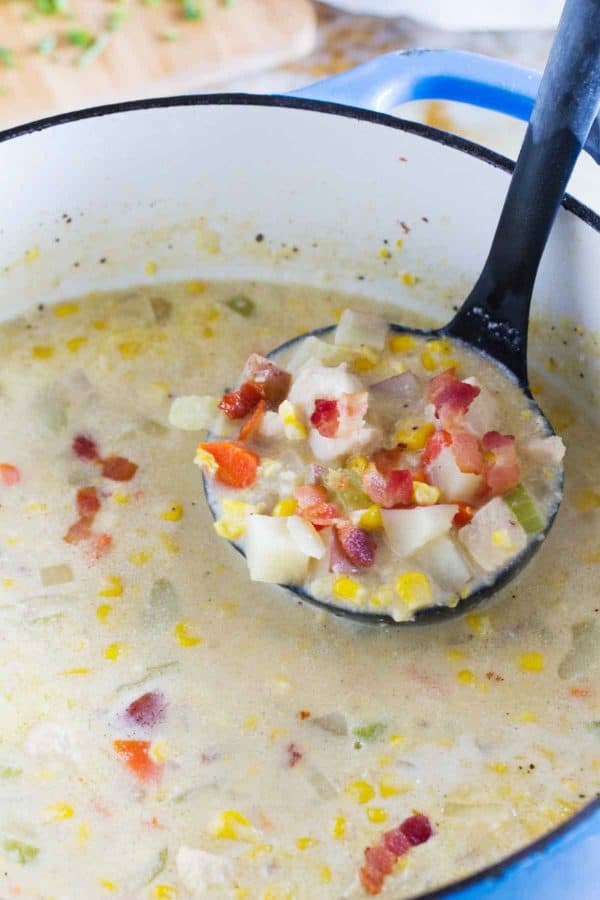 All of this to say, things are a little crazy in the Taste and Tell household currently.  Which is why my posting has been so erratic the last month.  I’ve had to go digging through my photos and recipes, looking for recipes that I haven’t posted yet.

I came across this New England Chicken Chowder Recipe that I made not too long ago, and I almost wasn’t going to post it, simply because we have been having the most wonderful Spring-like weather lately.  But then I saw that lots of other people haven’t been quite so lucky, and snow is still coming down.  And since we technically still have a week of winter, I decided that I had to share this recipe.  And it’s really good, so there’s that, too. 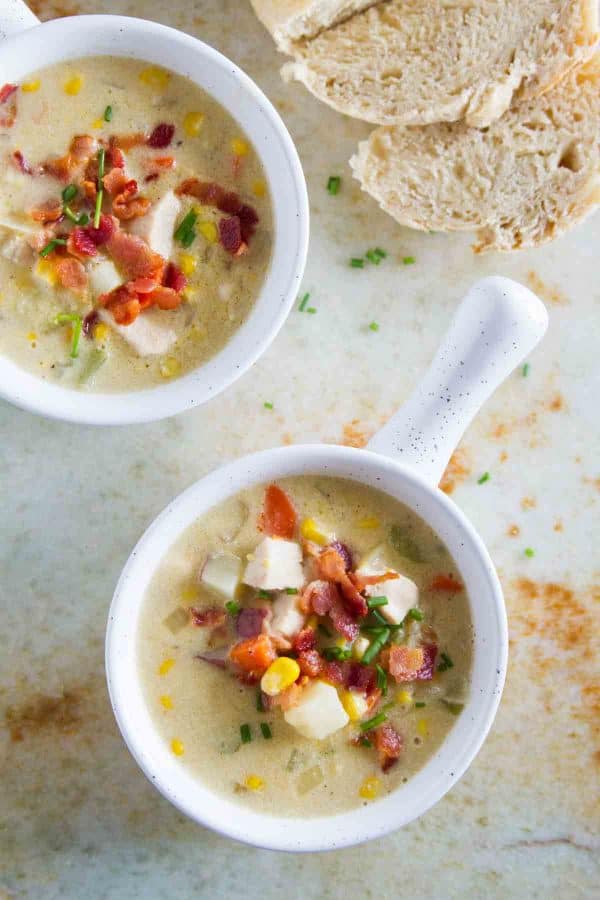 When I saw this recipe, I knew I would love it. I’m a big clam chowder fan.  Well, any chowder recipe fan.  So I loved that this replaced the clams (which my kids are a little weirded out about) with chicken.  Because everyone loves chicken, right?  I use chicken thighs, because I love how much more flavor they have than chicken breasts.  And of course, you have to have bacon.  🙂

This New England Chicken Chowder Recipe is a soup recipe that the whole family will love! 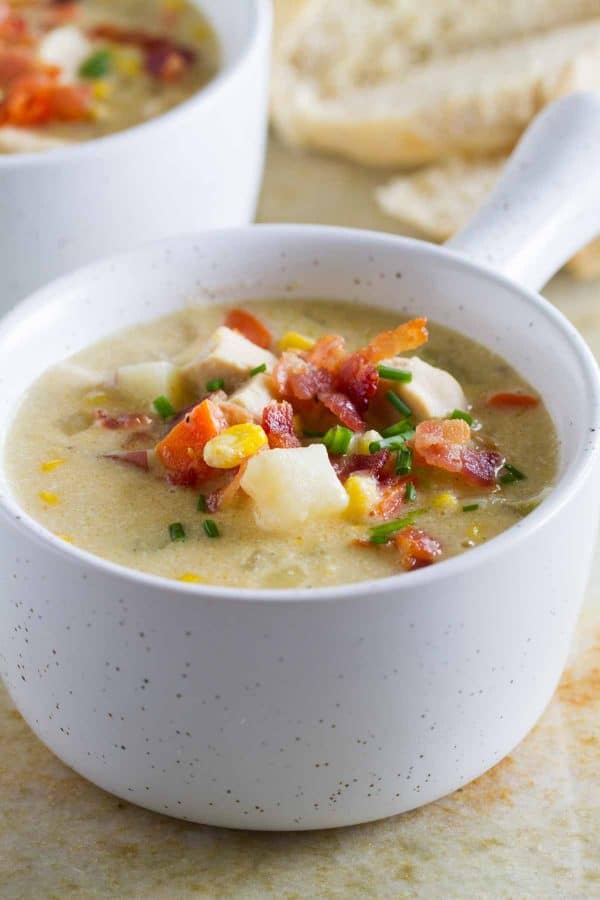 Want more chowder recipes? This Crock Pot Corn Chowder has been a family favorite for years!  This Grilled Corn and Potato Chowder is perfect in the summer, and this Bacon Cheeseburger Chowder is hearty and filling!

Or check out these chowder recipes from around the web: Chunky Chicken Corn Chowder from Barefeet in the Kitchen, Sweet Potato Chowder with Crispy Pancetta Chunks from Foodness Gracious and Creamy Roasted Cauliflower Chowder from Two Peas and Their Pod.

You’ve all had clam chowder, but what about this New England Chicken Chowder recipe? It combines your favorite New England chowder flavors like potatoes and bacon, but adds in crowd pleasing chicken. This chicken chowder recipe is creamy and comforting!

Cook the bacon in a large pot over medium-high heat until crispy, about 6 minutes.  Using a slotted spoon, transfer the bacon to a paper towel lined plate, leaving the bacon grease in the pot.

Turn the heat and add the butter.  Once melted, sprinkle in the flour and cook, stirring constantly, until light brown, about 2 minutes.  Add the potatoes, celery, onion, carrots, garlic and bay leaves. Stir until coated, about 2 minutes.

Stir in the chicken broth and the chicken.  Cook, partially covered and stirring occasionally, until the chicken is cooked through, about 20 minutes.

Place the cream and half of the corn in a blender and blend until smooth.  Stir the puree, along with the remaining corn, into the soup.  Season to taste with salt and pepper.  Cook until heated through, then stir in the bacon, reserving some for serving.

Serve hot, topped with chives and the remaining bacon.

adapted from Every Day with Rachael Ray January/February 2017 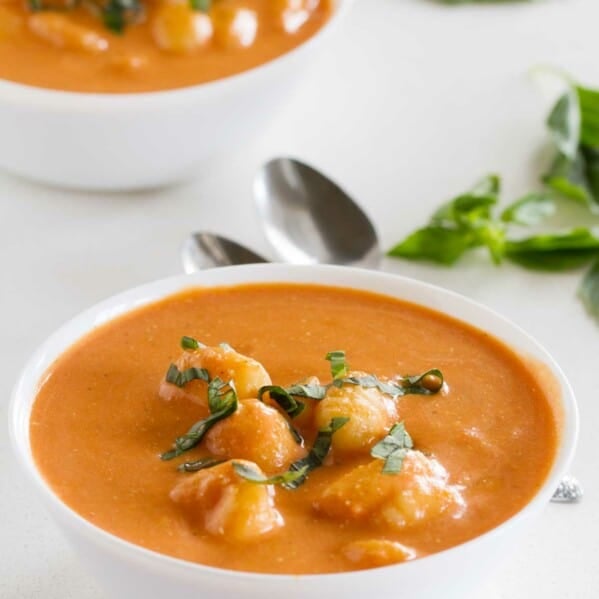 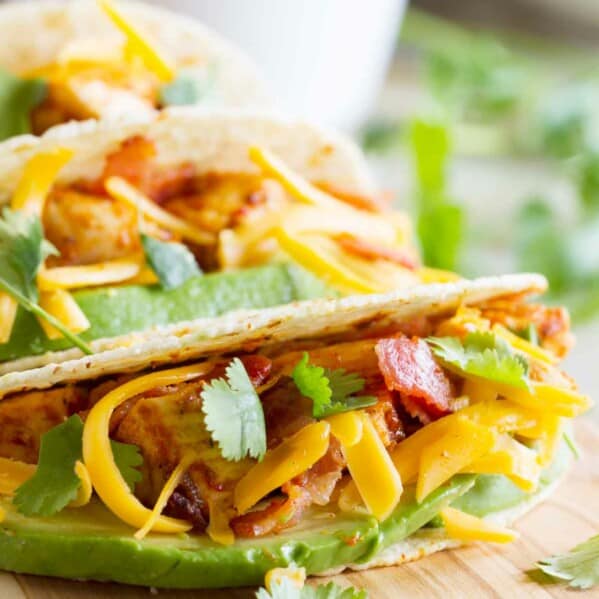