The Donut Bar in San Diego, CA – for award winning donuts, and the best yeast donuts I have had! 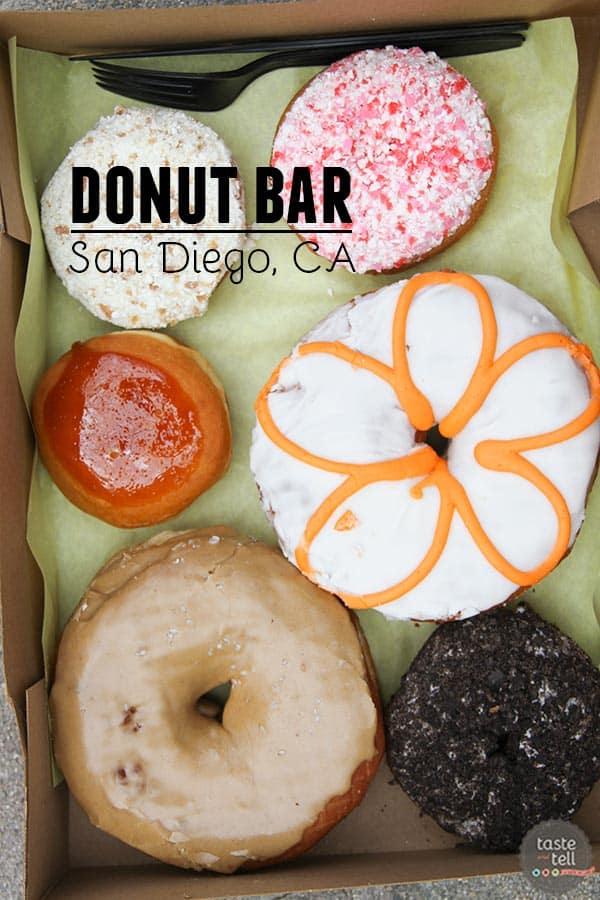 If you are a regular reader, you will know that I’m a self-proclaimed donut aficionado. They are my thing. My jam. And while I do like making them, I’m all about eating them. Especially when I’m traveling.

So of course, when I found myself with a few extra hours in San Diego, what is the first thing I do? I look for a donut shop. And luckily, The Donut Bar was located within walking distance from my hotel.

When I started reading about the Donut Bar, I saw that they only stay open until they sell out of donuts. And that on some days, that can be pretty early. (Which by the way – you know a donut shop is a good one if they only close when they sell out!!) I knew I would be able to get there until around 11am, and honestly, I was worried they would already be closed. But luckily, it was a Monday, and I got lucky and they were open with a decent selection of donuts left.

Donut Bar has a lot of creative donuts, like a pop tart stuffed donut, or their very popular strawberry split donut. Unfortunately, I didn’t get to partake in the pop tart donut, but I did pick out 6 donuts that I thought looked amazing.

So just a side story – when you love food, and you are traveling by yourself, things can get interesting. Yes, I did order 6 donuts, but no – I didn’t eat all 6 by myself. I did sample all of them, but I knew I would be with a group of people later in the day that I could share with. But I had this box of donuts, and while the Donut Bar does have an area upstairs where you can sit and enjoy your donut, the lighting wasn’t that great so I opted to go for a little walk to try to make it down to the water.

Well, it was a bit of a jaunt, and I carried those donuts the whole way. While I was walking, I came across a little courtyard/park with benches, so I thought I’d sit and take pictures and try the donuts. But while it wasn’t terribly busy, there was a bit of foot traffic. I can only imagine what those people walking by thought of me, sitting on a park bench with a box of 6 donuts on my lap. I kept laughing as people would give me that look. It was quite the experience!!

But the donuts… Yes, the donuts. I bought a mixture of cake and yeast donuts, and while I did really like the cake donuts, those yeast donuts were outrageous. The best yeast donuts that I have ever had. They were huge – probably the size of my whole hand (fingers included) but they were fluffy and chewy and everything that a donut should be. I probably could have easily eaten both of those huge donuts myself, I liked them that much!!

Scroll down below to see what I ordered and my thoughts on each. I’m going by memory on the names of the donuts, so if you’ve been to The Donut Bar and if I got any of the names wrong, please feel free to correct me! 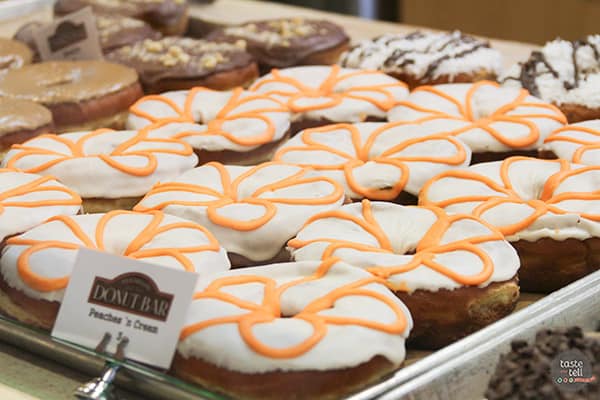 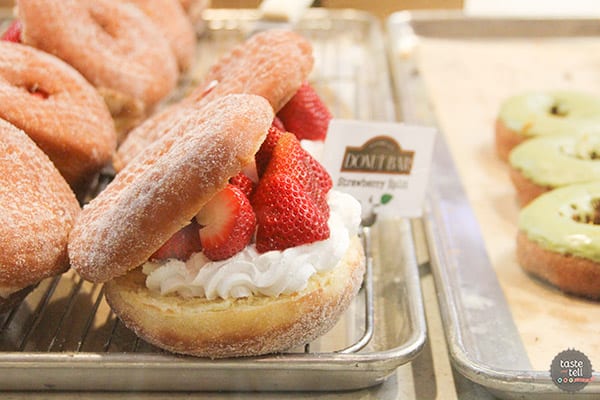 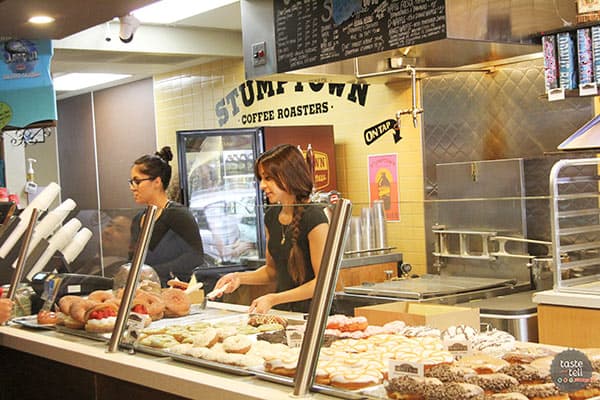 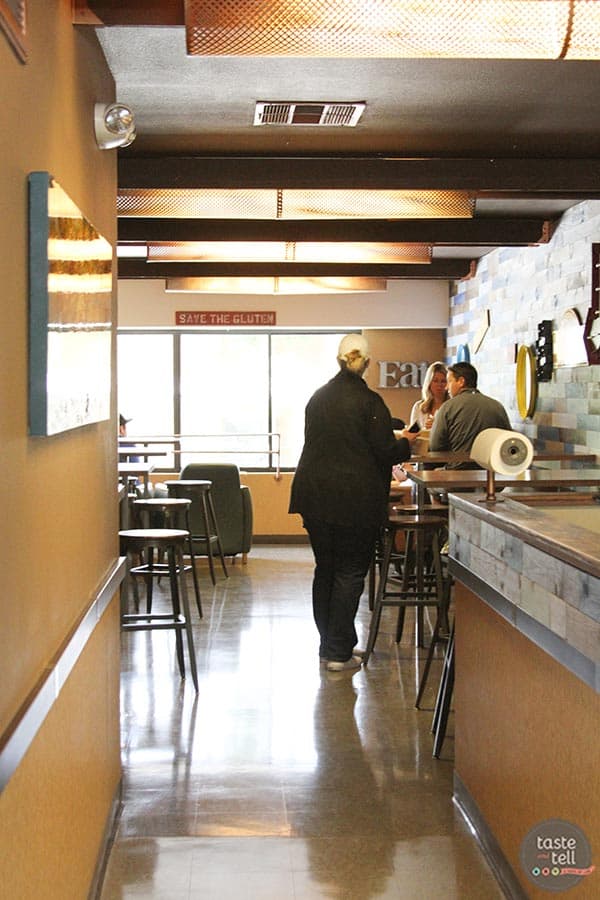 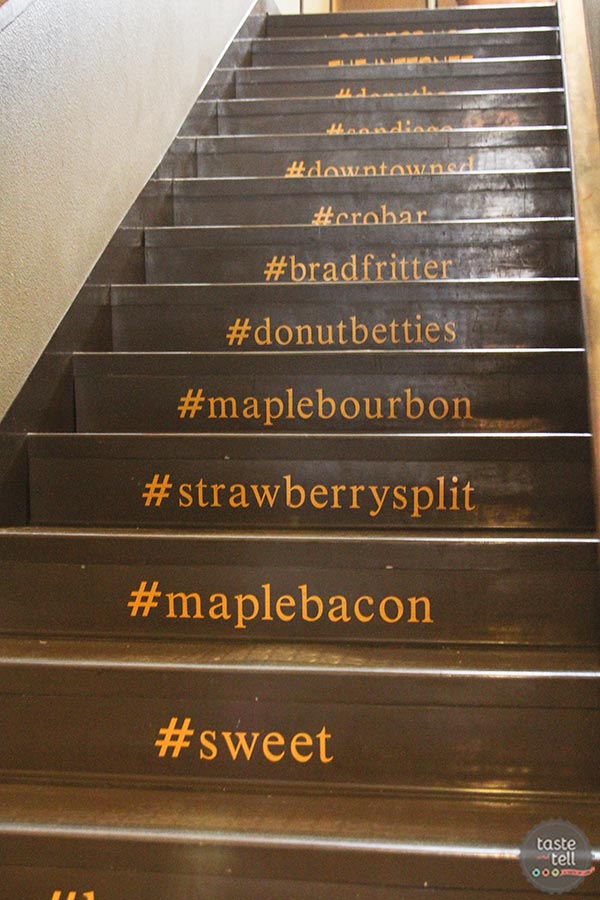 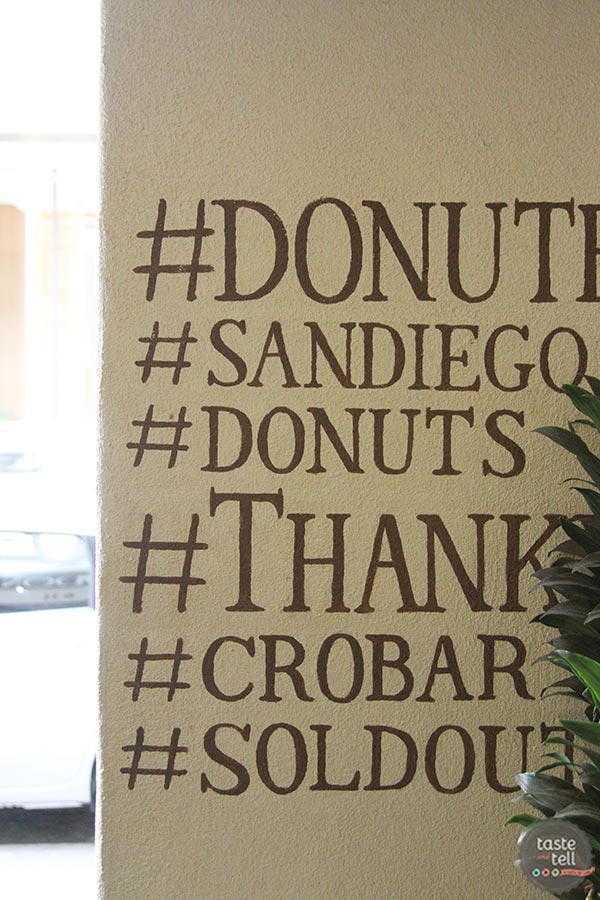 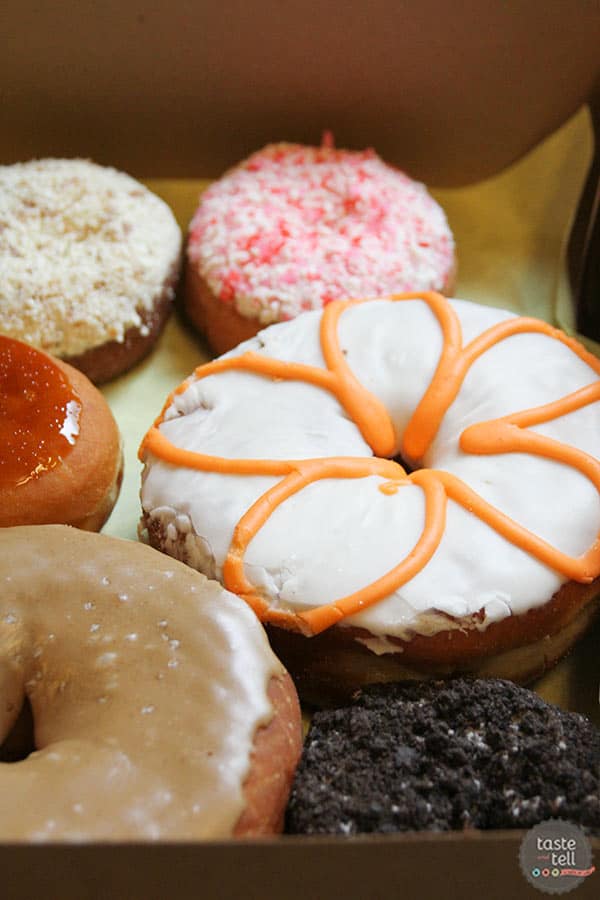 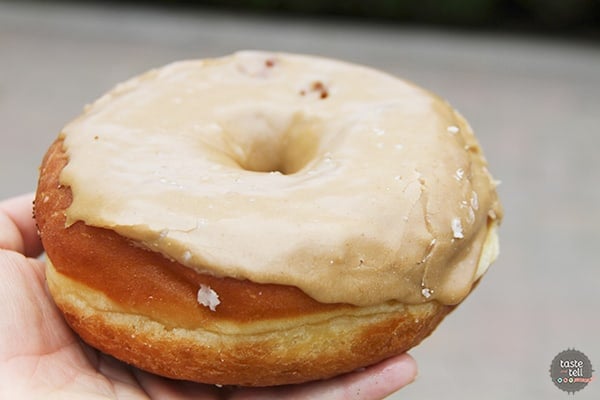 Salted Caramel Donut – probably my favorite! The perfect yeast donut with caramel icing and a touch of salt. 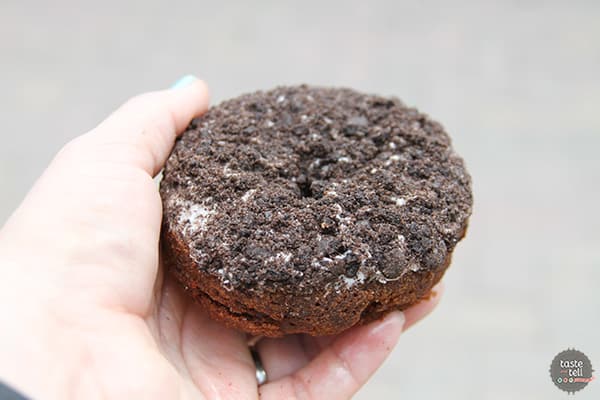 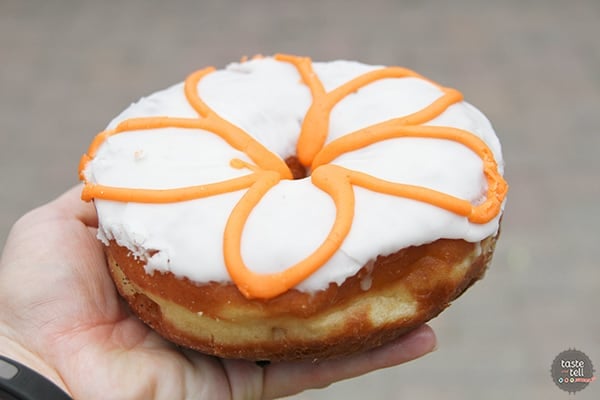 Peaches n Cream – The donut itself was not flavored peach, just the icing, so I’m not sure if it’s an artificial flavoring they use or what it is. Regardless, the peach flavor stood out and I loved this one! 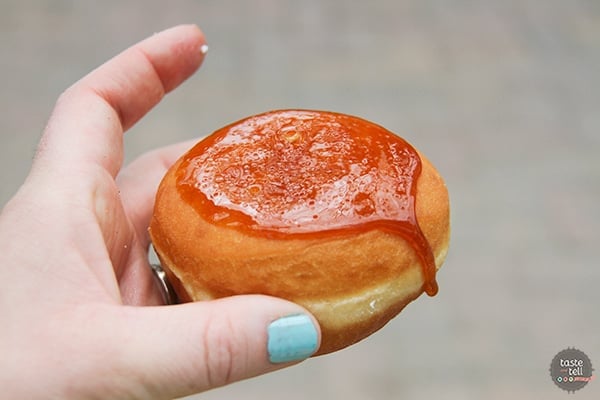 Creme Brulee – I wasn’t sold on this one after my first bite. I thought the creme brulee donut from Doughnut Plant in New York City was much better. But later, I realized I didn’t get any cream with my bite, and once I had a proper bite with the cream, I could see why it was so popular. While it was really, really good, I still think I prefer the one at Doughnut Plant (but just by a hair). 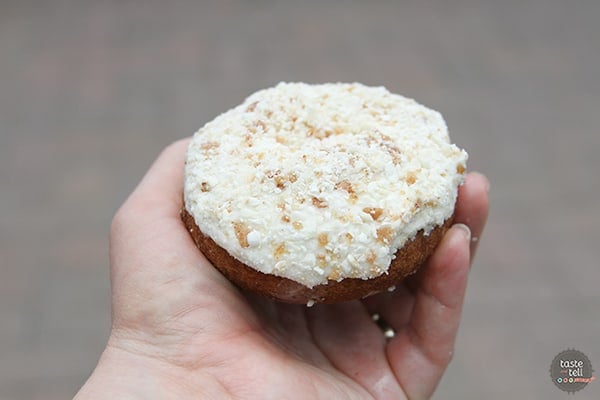 Apple Orchard – loved the sweet spice in this one! 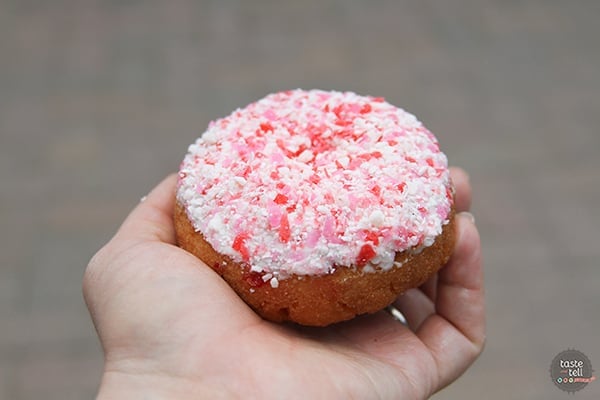 Strawberries n Cream – again, I’m not sure if it is artificial flavors in this one, but I really, really liked this. I know my daughter would have gone crazy over it! 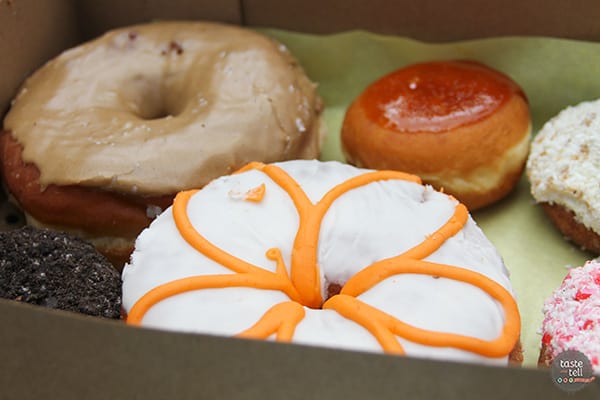 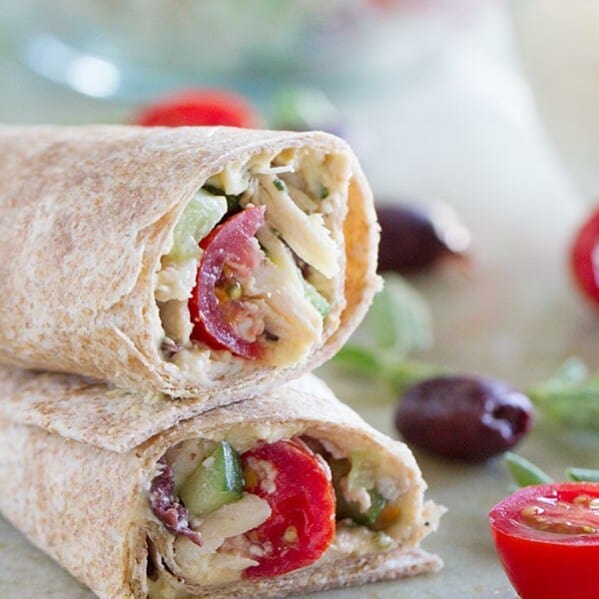 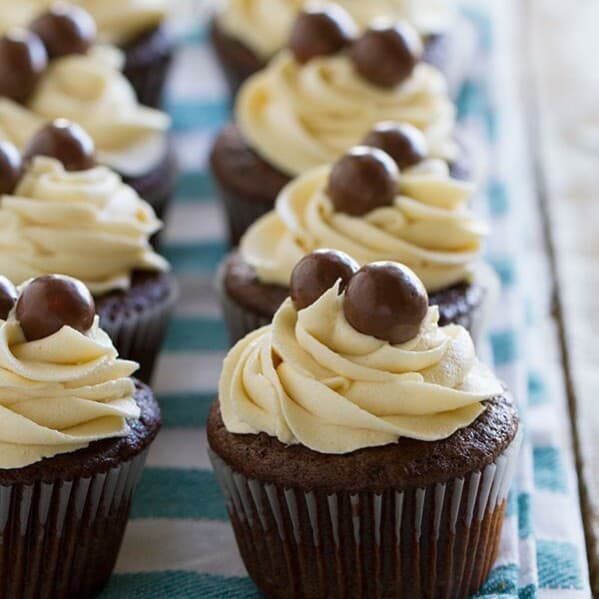