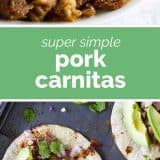 Great food doesn’t have to be complicated – this Pork Carnitas Recipe is so simple but it will blow your socks off. Serve the carnitas in tacos, burritos, enchiladas, or however your heart desires!

If you love this recipe, you’ll probably also want to check out my post for 22 more taco recipes! There is something for everyone! 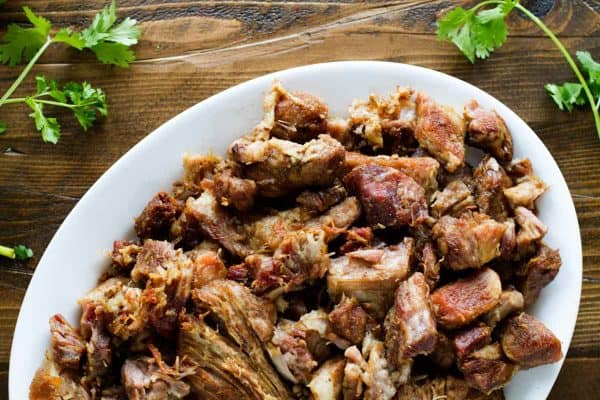 I’ve said it before, but I think that sometimes as a blogger, or as food bloggers in general, we think that we have to come up with something totally new and out there. Something that is crazy and inventive.

But we forget that sometimes, there is nothing better than going back to the basics. Or to the tried and tested recipes that we know are going to be great.

Several years ago, I was gifted a cookbook. As I read through it, I came across this pork carnitas recipe. And I started reading, and saw that the ingredient list only contained 3 ingredients – one of those being water, and another being salt. I thought for sure there would be more to the recipe after that beginning – but nope. Pork, water, salt. That’s it.

This recipe really is the epitome of simplicity. You take the pork, cover it with water, and cook until the water has evaporated. Then you let the fat render from the meat, which browns and crisps up the edges, forming the most delicious, tender, irresistible pork you will ever place in your mouth. I’m not even kidding you – I ate so much of this before we even had dinner, and I still went back for more.

This recipe is honestly one of my favorite things that I have ever made. Ever. It speaks volumes when such a simple recipe becomes such a favorite!! 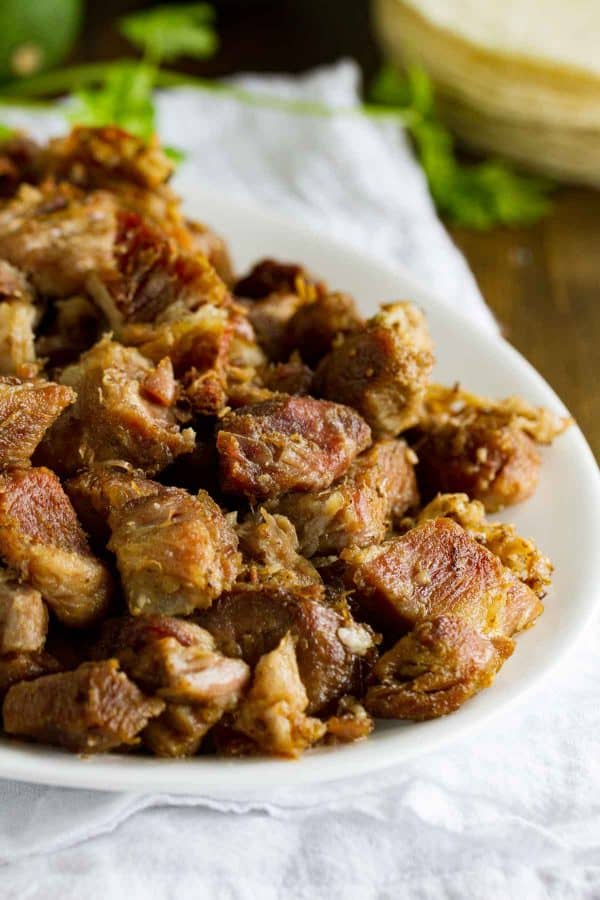 If you have been to Mexico, or to that hole in the wall taco joint in your hometown, you’ve probably had carnitas. Carnitas are sort of the Mexican version of pulled pork. Pork is slowly cooked, then crisped up before serving. It’s commonly served in tacos, but is just as great in burritos or enchiladas, or even just by the forkful.

And just like many recipes, it seems like pork carnitas really vary from region to region. I read through so many versions of carnitas. Many of them contained long lists of spices, some with chiles, others with orange juice. I don’t think there is really a right or wrong version – I’m guessing different people grew up making it different ways.

There is one thing that is common in the traditional recipe, though. Traditionally, the pork is slow cooked in lard. You can definitely use lard in this recipe (just use it instead of the water), but even though it’s possible to find lard, many home cooks don’t really want to cook meat in lard all day. That is just one reason I love this recipe so much. You get an insanely delicious end result by only using the pork, water and salt. 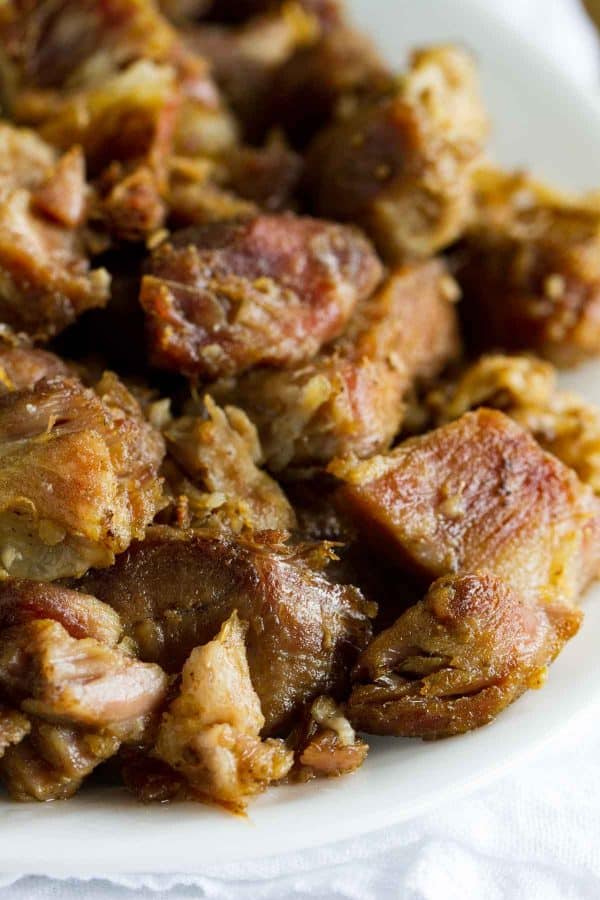 How to Make Pork Carnitas

I know I keep saying how easy this is to make, so here is the outline of how to make this recipe. Make sure to scroll down for the full printable recipe with amounts and times. 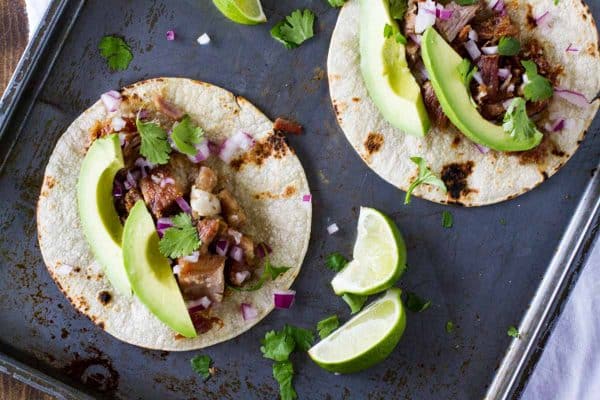 Great food doesn’t have to be complicated – this Pork Carnitas Recipe is so simple but it will blow your socks off. Serve the carnitas in tacos, burritos, enchiladas, or however your heart desires! 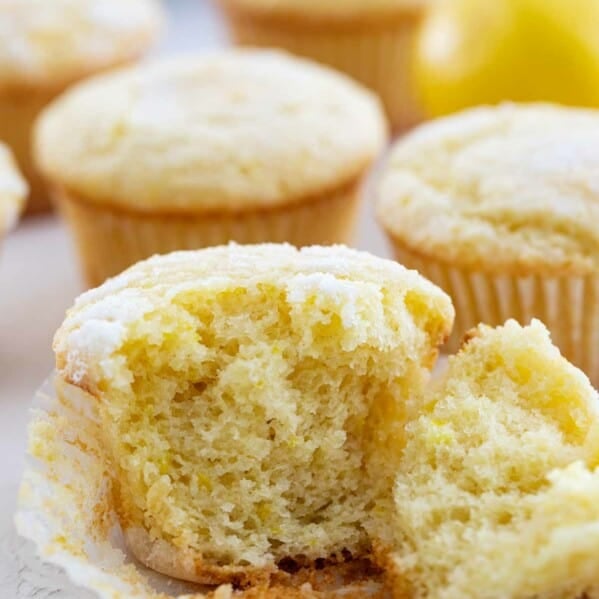 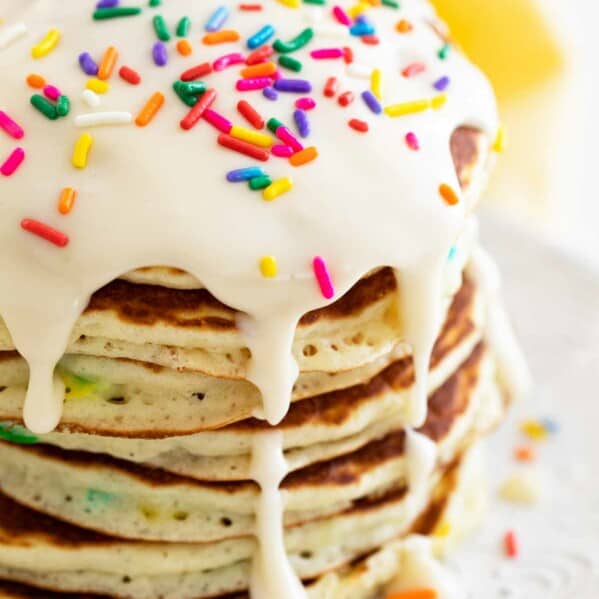