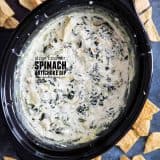 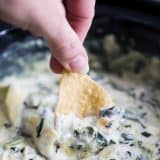 Make it ahead! The best of crockpot appetizers, this Crockpot Spinach Artichoke Dip is a great make ahead appetizer recipe that everyone loves. Only a few ingredients, a few minutes of prep work, and you have a dip that will disappear quickly.

But one of my biggest annoyances when you are trying to prepare a bunch of appetizers is that they all have to go in the oven at the same time.  Even with 2 ovens, they can get filled up pretty quickly. And if you are taking your appetizer to someone else’s house, you don’t always know how much oven space they will have, either.  So it’s pretty much impossible to make sure everything is done at the same time and ready for guests.

Enter – the crockpot!!  This slow cooker spinach artichoke dip recipe could seriously be the easiest appetizer at your next get-together.  Throw all of your ingredients in the crockpot and walk away.  When it’s time to party, this dip is ready for you!  Serve it up with some tortilla chips (my favorite!), crackers or slices of bread, this easy appetizer recipe will be the hit of the party.

Spinach: For ease, I like to use frozen spinach that has been thawed and drained. For best results, you want it pretty dry, so I squeeze out any liquid with a kitchen towel. You could also use fresh spinach, but you’ll want to blanch it, then squeeze the liquid from it.

Artichoke Hearts: If you get the quartered artichoke hearts, you can just drain them and add them to the dip. If you get them halved or whole, you’ll want to chop them up a bit first.

Mozzarella and Parmesan: I love the mix of both cheeses here. The cream cheese makes the dip smooth, the mozzarella gives it the real cheesy taste and feel, and the parmesan adds tons of flavor.

Garlic: Fresh garlic will bring you the most flavor, but in a pinch, you can substitute powdered garlic.

Pepper: I like to season with a good dose of pepper. You shouldn’t need to add salt because many of the other ingredients are salty, but I do add pepper. Freshly ground pepper is best. If you like a little spice, you could also add in red pepper flakes.

This dip is so easy – you don’t even really need instructions!

COMBINE: Combine all of the ingredients in your crock pot. It will be pretty full – but it will shrink down when everything starts cooking.

HEAT: Cook on high until everything is melted and combined.

Can you make it ahead of time?

Of course! This recipe is so easy that there really is no reason to make it ahead of time, but if you do want to, just make the recipe as stated. Once the dip is melted and combined, you can transfer it to a container and refrigerate it for up to 3 days. When you are ready to serve it, put it back into the slow cooker and cook until it is heated all the way through again.

Can you cut it in half?

Yes – it’s fairly easy to cut in half if you are serving it to a smaller crowd. Just use half the amount of the ingredients. You probably won’t need as big of a slow cooker, as well.

How do you serve this crockpot spinach artichoke dip?

I like to just leave it in the slow cooker and have a large spoon so that people can dish out a serving. You do want to keep it warm, so if you choose to remove it from the crockpot to serve, just know you’ll need to serve it quickly before it cools down too much.

I like to serve this dip with tortilla chips, but it’s also great with vegetables, like celery sticks or carrots.

Can you make it on the stovetop or in the oven?

You can make it in the oven, but I would suggest using this Spinach Artichoke Dip recipe that was made for baking. I have not tried making this on the stove, but I would assume it would work just fine. Again, though, you’ll need to keep it warm while serving, and it may burn if kept on the stove without stirring.

Make it ahead! The best of crockpot appetizers, this Crockpot Spinach Artichoke Dip is a great make ahead appetizer recipe that everyone loves. Only a few ingredients, a few minutes of prep work, and you have a dip that will disappear quickly.

This dip can easily be halved for smaller crowds.

If the dip is too thick, add in more milk, a tablespoon at a time, until you reach your desired consistency. 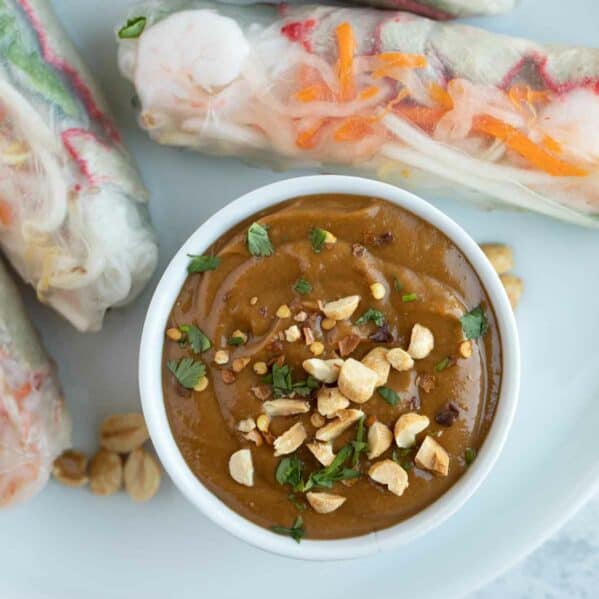 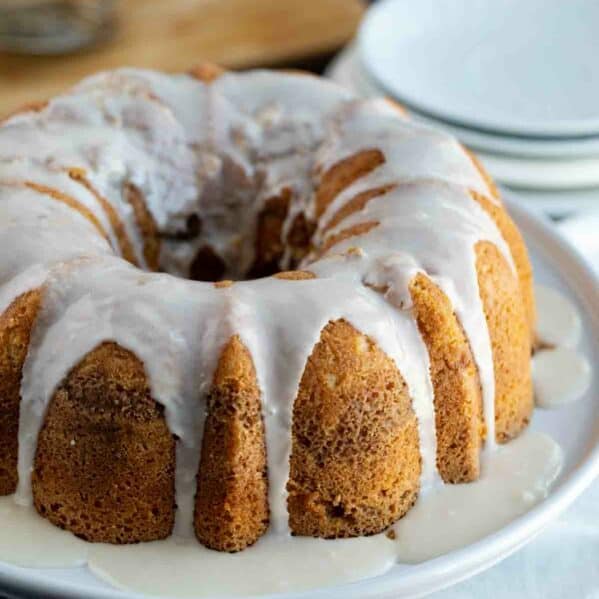 I made this for my husband’s work Christmas party and everyone loved it! Very creamy. Made exactly as is. Peppered to taste, like 1/2 tspn. I used pre-chopped frozen bagged spinach. Whole artichoke hearts that I diced before putting into the crock pot. Served a party of about 30 with no leftovers. I served it with pitta chips and cut up sliced sourdough rosemary bread.. it was DELICIOUS with the bread!

I made this dip as one of our Christmas appetizers, and it was such a hit! People told me they loved it so much that they could eat it on its own haha