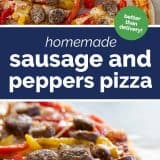 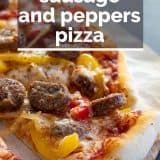 Fan of sausage and pepper sandwiches? The popular sandwich is turned into a pizza – this Sausage and Peppers Pizza is topped with Italian sausage, peppers and onions. 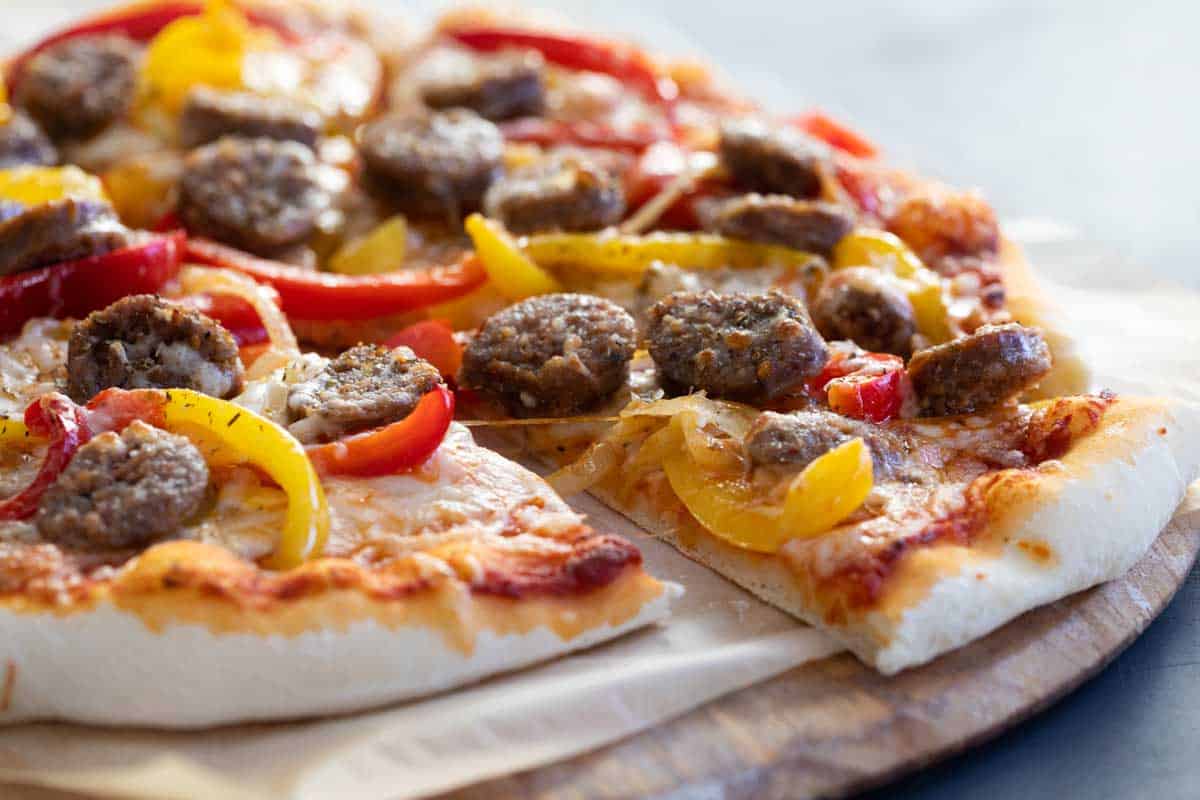 We have pizza night more than anything. Except maybe tacos. I like pizza, my husband likes pizza, my kids like pizza. And they even like my pizza more than delivery. (Win!)

So we have pizza night. Almost weekly. My kids are pretty basic, though – always opting for cheese pizza or pepperoni pizza. Most of the time, that’s what my husband and I will eat, too, but sometimes, I want something different than the ordinary. One of those “other” pizzas that I love is this Sausage and Peppers Pizza. It’s not too far out there, but it definitely brings the flavor. 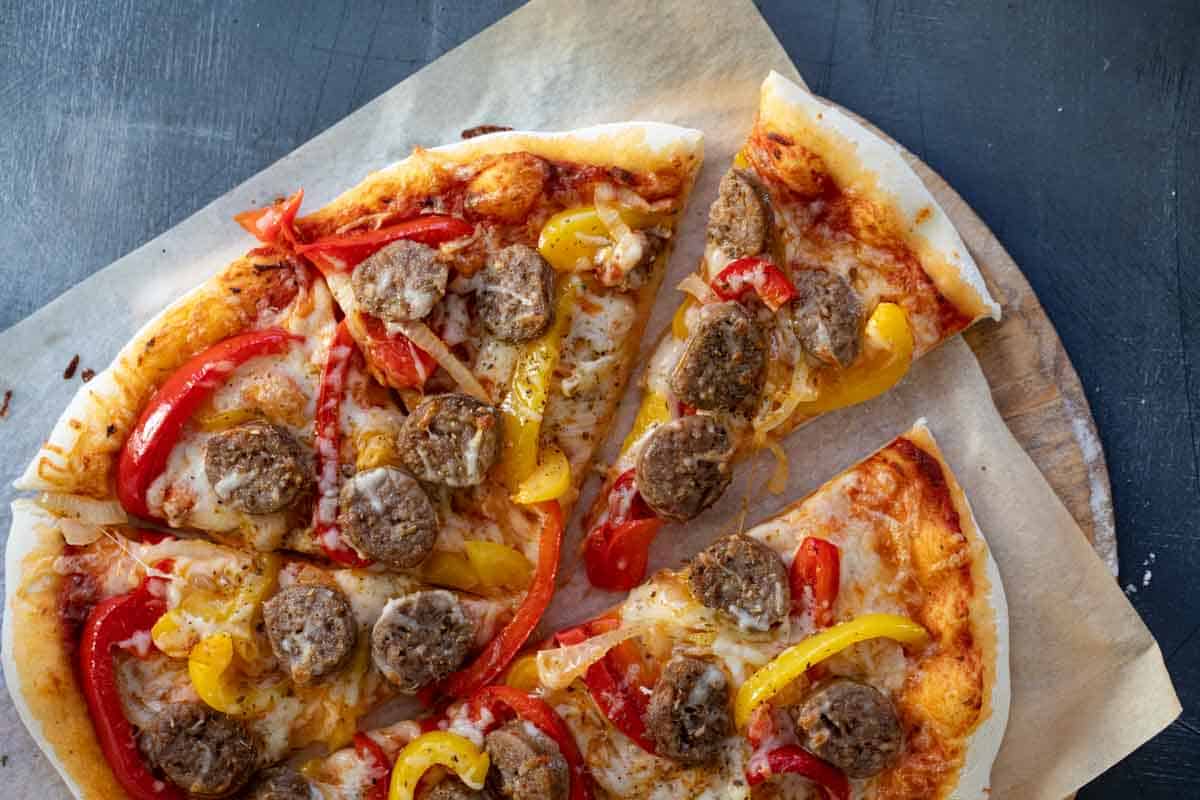 This is an easy pizza – nothing crazy, and everything should be easy to find! Here is what you’ll need:

Sweet Italian Sausage – The recipe calls for 1/2 lb, but you can really add as much as you want. I usually end up using 2 links. You can totally switch this up for spicy Italian sausage as well!
Extra Virgin Olive Oil – I love the flavor this brings, but feel free to swap out for any other oil that you like to use.
Red and Yellow Bell Peppers – so you really don’t have to use red and yellow, but those are my favorite. And I like the mix. But you can really use any bell peppers you like/you can find/you want to.
Onion – I just use a regular yellow onion.
Pizza Dough – I have a whole post all about my dough and all the tips and tricks. Make sure you check out that post, because it’s really the last pizza dough recipe you’ll need.
Pizza Sauce – I’ve been on the prowl for the best homemade sauce recipe, and while that may come someday, for now I just use store bought.
Italian Cheese Mix – I rarely use pre-shredded cheese. I don’t like it as much as freshly grated, and it doesn’t melt as well. I did take a shortcut here, but you can use any Italian cheese blend you want if you want to grate it yourself.
Oregano – you can leave this off if you want, but it definitely brings in an extra Italian flavor at the end. It would be even better with fresh oregano, but I always have dried oregano on hand.

How to Make Sausage and Peppers Pizza

A lot of times, I just throw everything on top of the pizza (especially veggies) and let the cook while the pizza cooks. But they usually end up pretty crisp, still, since I bake at a high temperature and the pizza isn’t in the oven for a lot of time.

For this pizza, though, I wanted the peppers and onions a little softer, so I do cook them ahead of time. As well as the sausage. So there is a little bit more work involved but it’s all worth it! 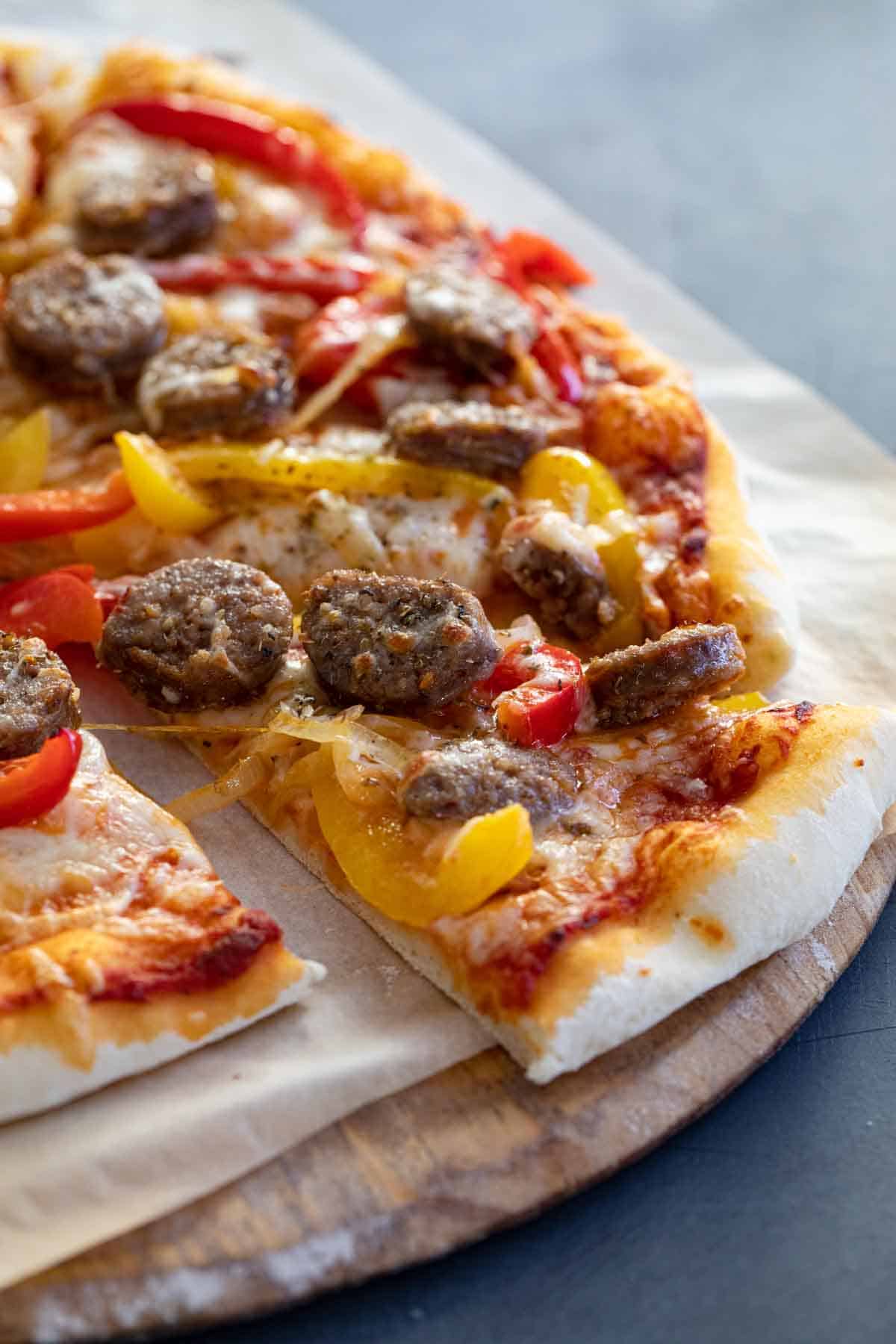 Fan of sausage and pepper sandwiches?  The popular sandwich is turned into a pizza – this Sausage and Peppers Pizza is topped with Italian sausage, peppers and onions.

*If you like a thinner crust, you can use less than 1 lb of dough. 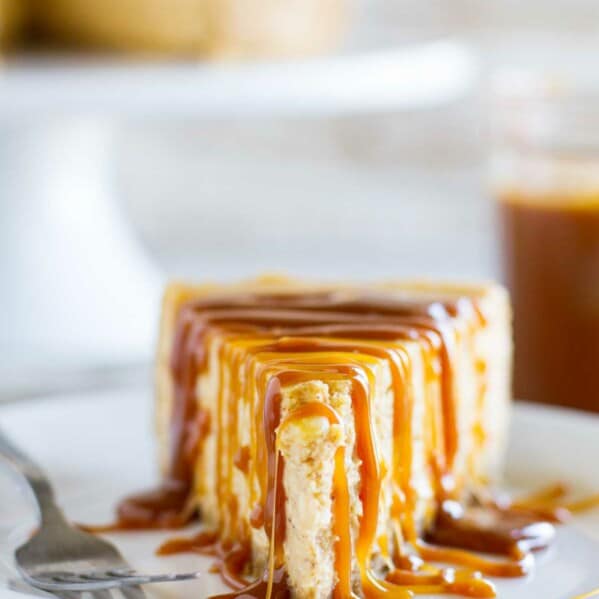 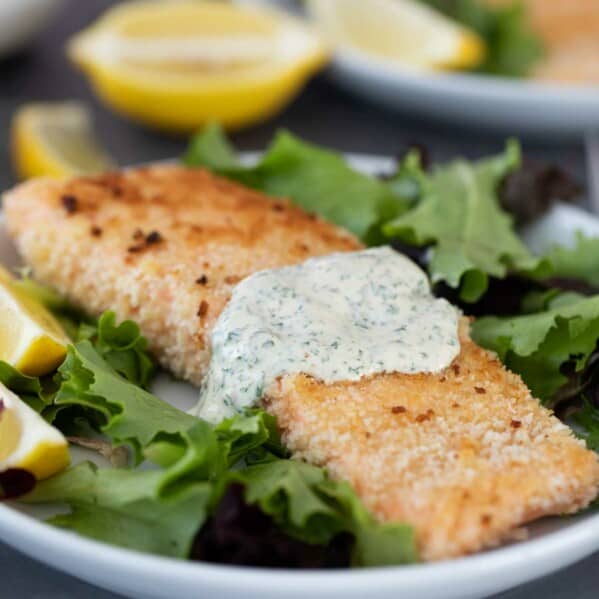