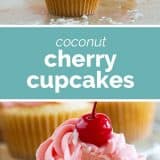 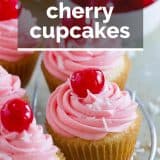 Pretty in pink – these Coconut Cherry Cupcakes are sure to be a hit. Easy coconut cupcakes have a creamy coconut center and a cherry pink frosting – pink never looked so perfect!

Also try my Cherry Coconut Smoothie if you love coconut and cherry together! 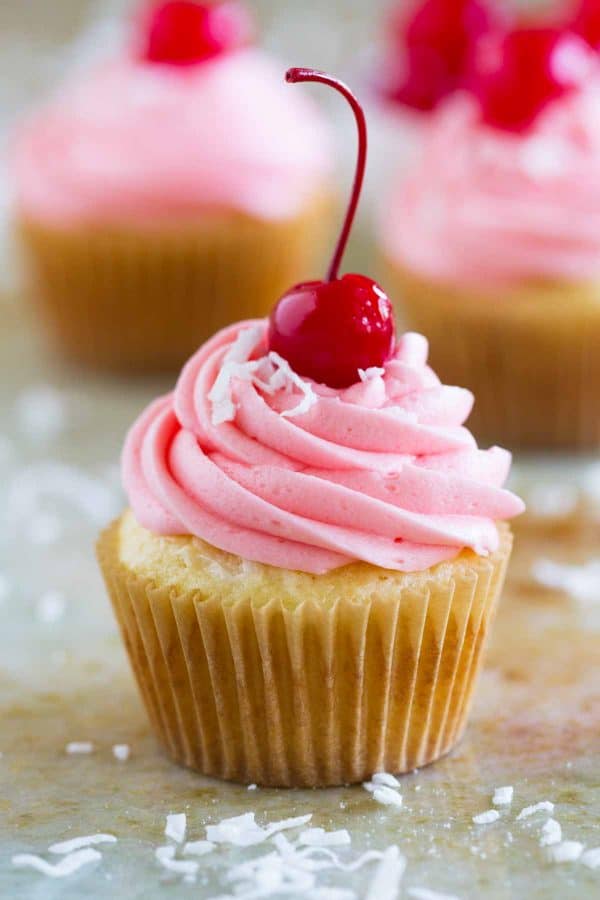 Why, hello there, February!

Somehow January is already over, and it’s time for all things pink and red and covered in hearts. Or maybe I’m already behind on the Valentine’s Day recipes (I seem to be behind a lot lately), but I’m ready to catch up. 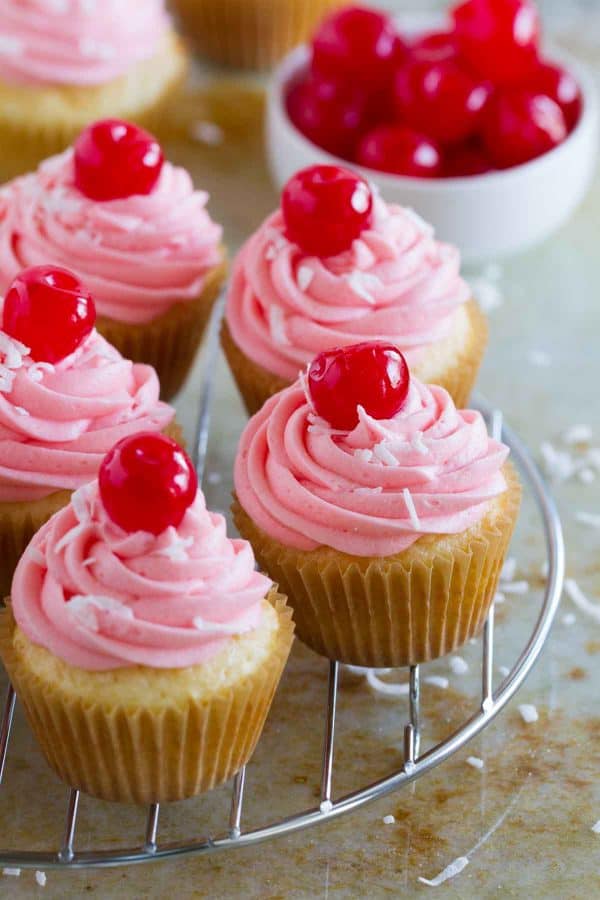 The last few years, I’ve done my yearly Red Velvet Week around this time. And believe it or not, I’m still trying to make that happen before Valentine’s Day. But my life is crazy town right now so we’ll see what actually happens.

Besides an overabundance of red velvet, I don’t normally do a lot of Valentine’s Day themed desserts. But I was reading to my kids the other night, and the book of choice was Pinkalicious. If you haven’t read the book, it’s about a girl who loves pink, but after eating too many pink cupcakes, she turns pink. At first, it’s all fun and games, until she decides that she just wants to be herself again. But every time we read that book, I always start craving pink cupcakes. Every. Single. Time.

Well, my chance finally came. There was a neighborhood bake sale, and I volunteered to bring a treat. And since Valentine’s Day was near, I thought it would be fun to do a Pinkalicious inspired cupcake. I would normally do something tried and true, knowing these cupcakes would be sold, but I went out on a limb and decided to make something new. 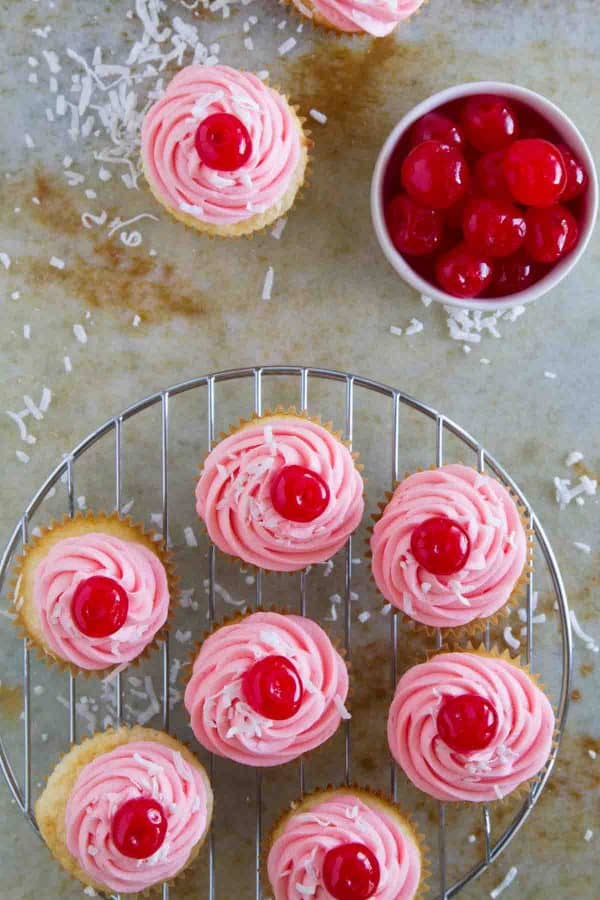 I knew I wanted pink, so the cherry part was a given. But I wanted something more than just cherry cupcakes. And just in case you don’t know, I’m kinda obsessed with coconut. I knew coconut and cherry would be a match made in heaven, so I got to work. And luckily, these turned out just as good as I was hoping for.

I didn’t get a chance to take photos of the cupcakes that time, but when it was another neighbor’s birthday, I decided to use that as an excuse to bake them up again. And now I may need to find a third reason to bake them yet again, because these are just that tasty.

I started with a cake mix, simply because I knew I didn’t have time to mess with a fussy recipe. It worked perfectly. I flavored them with a little bit of almond extract, and mixed in some coconut. Then the cupcakes are filled with a dreamy coconut filling. And don’t forget the pink cherry frosting – they wouldn’t be Pinkalicious cupcakes without it!!

These Coconut Cherry Cupcakes belong at every Valentine’s Day party this year. So pretty in pink!

Pretty in pink – these Coconut Cherry Cupcakes are sure to be a hit. Easy coconut cupcakes have a creamy coconut center and a cherry pink frosting – pink never looked so perfect! 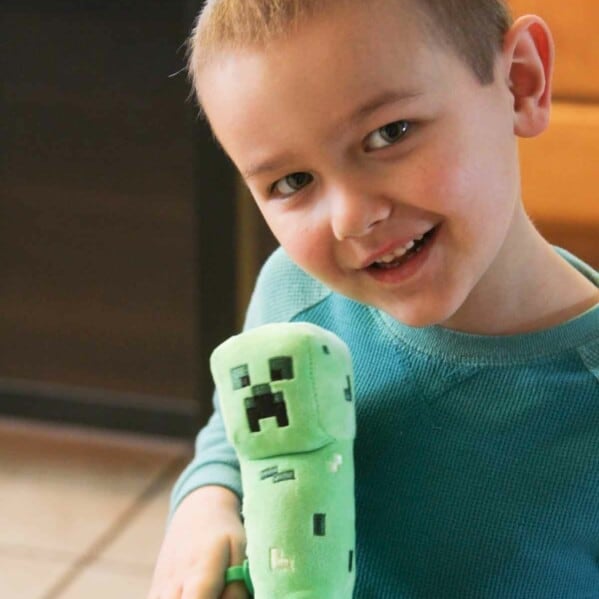 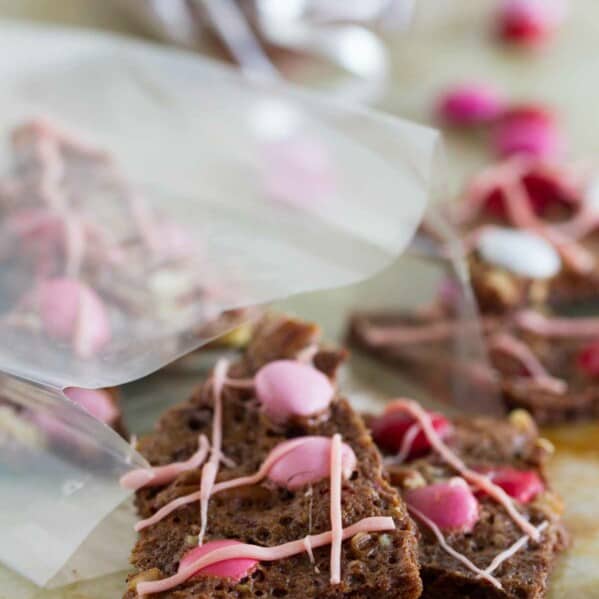