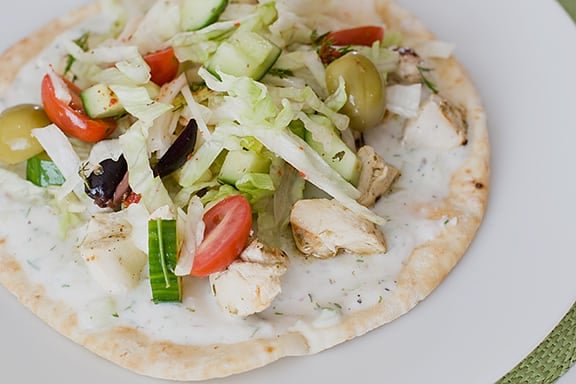 Last week, the recipe I featured made me think of Greek comfort food – this week’s recipe makes me think Greek street food! I saw the picture of this in the cookbook, and I knew I wanted to try it.

I decided to make these for lunch this week. It was definitely delicious – but let me warn you – it was a lot of work for a lunch. Not just one recipe here – but 4! Each element is not necessarily difficult, but when you put them all together, it does take a bit of time. And the meat needs to brine for at least 24 hours, then marinade for 4 to 24 hours. But really, I don’t want to discourage anyone from making this, because it really is delicious!! 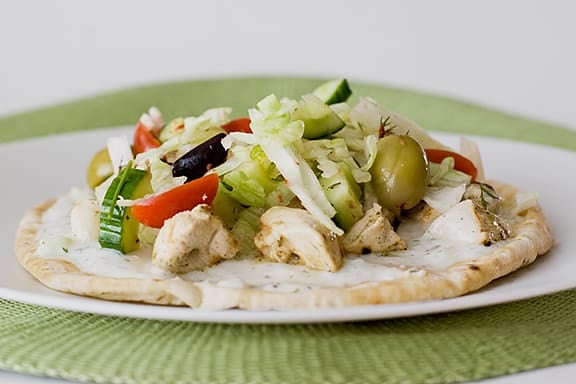 Souvlaki: Chicken Shish Kebab
from How to Roast a Lamb

In a plastic or ceramic bowl or crock, stir the brine ingredients together until the salt and sugar have dissolved (this will take a few minutes). Cut the chicken into large chunks. Immerse in the brine and refrigerate overnight.

Remove the meat from the brine and rinse under cool running water. Pat dry with a towel. In a deep baking dish or roasting pan, combine the olive oil, garlic, thyme, bay leaves, rosemary, shallots, and a little salt and pepper. Thread the pieces of meat onto 4 wooden skewers and immerse the skewers in the marinade. Cover with plastic wrap, pressing the plastic right down onto the meat to exclude any air. Refrigerate for at least 4 hours; overnight is even better, though not essential.

Remove the skewers from the refrigerator and let stand at room temperature for 20 to 30 minutes while you preheat a charcoal or gas grill, or ridged cast-iron grill pan, until hot.

In a bowl, combine all the ingredients for Greek Salad and reserve.

Season the Souvlaki lightly with salt and pepper and grill until firm and char-marked on all sides, about 6 minutes. Transfer to a resting platter and dress with Ladolemono.

Paint the pita with extra-virgin olive oil, season with salt and pepper, and grill until firm and char-marked on all sides. Smear some Tsatziki in the center of each pita round. Push the meat off the skewer on top of the tsatziki. Top with some of the Greek Salad. Pull the sides of the pita up to meet in the center, like a taco. Serve like a hand roll, or wrap and secure with a wide strip of parchment. Messy and great!

Greek Salad
(this is the full recipe. You will only need 1/4 of the recipe for the souvlaki)

Brush the onion slices with a little olive oil and season with kosher salt and pepper. On a griddle pan or cast-iron skillet, grill the onions until tender. Separate into rings.

IN a large bowl, combine the remaining ingredients.

In a bowl, combine the lemon juice, mustard, oregano, 1/2 teaspoon kosher salt, and a generous grinding of pepper. Whisk to blend the mixture completely and, whisking all the time, drizzle in the olive oil. This sauce will separate; whisk or shake in a jar before using.

Quarter the cucumber lengthwise and trim off the triangular wedge of seeds. Cut the cucumber into very small, even dice. Transfer to a mixing bowl.

IN a food processor, combine the garlic, vinegar, shallots, and dill. Pulse until finely chopped but not pureed. Add the mixture to the cucumbers; add the yogurt. Fold together with a rubber spatula, adding the olive oil and lemon juice. Season liberally with kosher salt and pepper, starting off with 1 tablespoon salt. Taste for seasoning. You can store Tsatziki in a covered, clean jar in the refrigerator for up to 1 week. 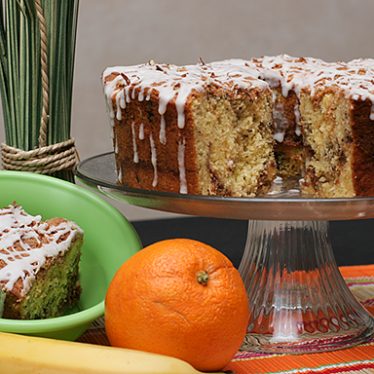 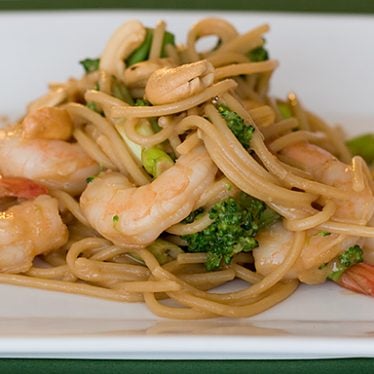