I’m going to keep this short and sweet today because I don’t even know if anyone will be out there reading today!!  I know so many people get really excited about “Black Friday”, but to me, it is a reason to stay inside all weekend long!  You won’t catch me fighting crowds and lines today!

I was actually contemplating skipping today’s post because I really messed it up.  It sounds like the easiest recipe, but those tend to be the ones I can’t quite get right!!  I chose this recipe for a couple of reasons.  First, because from reading in this cookbook, this is a very typical and common Hawaiian dessert.  I was intrigued because of it’s simplicity, but the book – and some further reading online – told me that this is a dessert that would be at almost every Luau.  And I’ll admit – I also chose to make it because I had all the ingredients on hand and I knew I could make it amidst all of the Thanksgiving prep!

I made this dessert, and I guess where I messed up was in how long I cooked it.  The book says to cook until it’s thickened, but I guess I’m just too impatient, because once I put it in the fridge, it never set up for me.  The next day, it was still a soupy mess.  I only made half the recipe (and maybe that’s why it didn’t work…) and I put it in smaller cups since I didn’t have a 4-inch pan.  So you can’t really tell from this picture, but it is pretty runny!  I got online and decided to read a little bit more about this dessert, and I learned that slow and steady is the secret to this recipe.  I just needed to give it some more time to become really thick.  I really do want to try this again sometime so that I can get it right!

Haupia
slightly adapted from The Food of Paradise

Stir together the cornstarch and sugar in a saucepan and gradually add the coconut milk, whisking so that you don’t have any lumps.  Heat until just simmering, and continue stirring until thickened.  Pour mixture into an 8-inch cake pan and chill until set.  To serve, cut into 1-inch squares.

*This is typically served on sections of ti leaf.  You can also serve them with a puree of fruit spooned over the top. 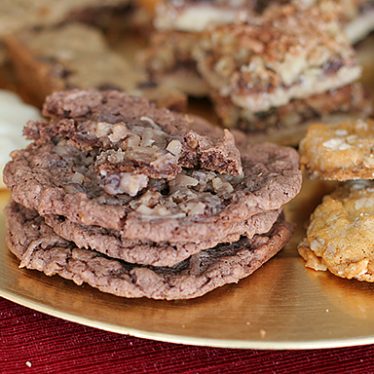