The perfect holiday cupcake, these Cranberry Orange Cupcakes are infused with orange zest and fresh cranberries, then topped with a silky cranberry orange buttercream. Make them even more festive by topping them with sugared cranberries. 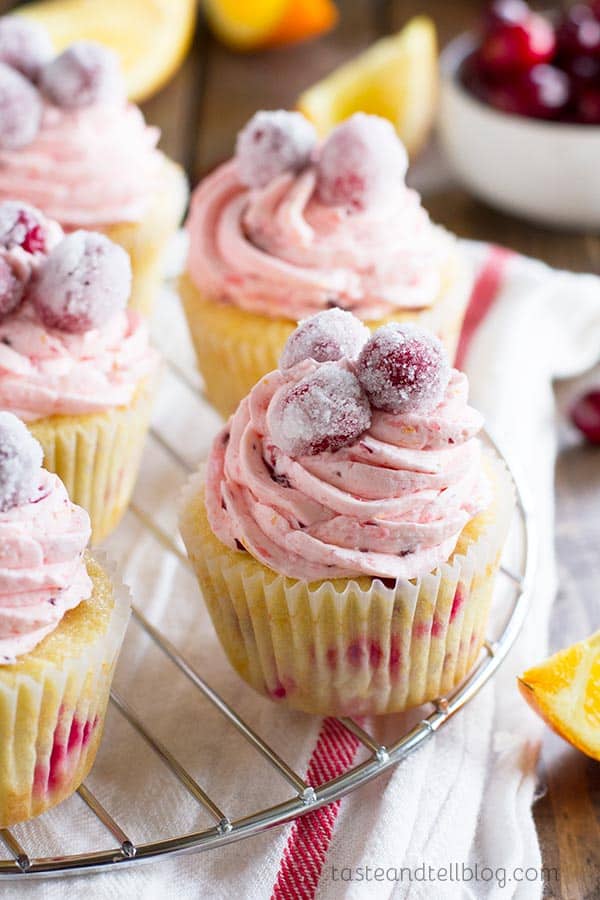 I hate to admit this, but I think I am becoming something that I said I’d never be:

Maybe that’s not the right thing to call it – I don’t turn my nose up at people or at foods. I’m always willing to give everything a shot. I don’t eat only gourmet food or insist on only certain brands.

Maybe calling myself a food critic would be more accurate. Let me explain.

A few weeks ago, I went out to dinner with my sister, mom and sister in law. I was in a part of town that I don’t make it to very often, and this was right in the middle of me being stuck at home without a car, so I hadn’t even really been out of the house much. I had decided that before I drove home, I was going to go to one of my favorite cupcake shops to get a cupcake. 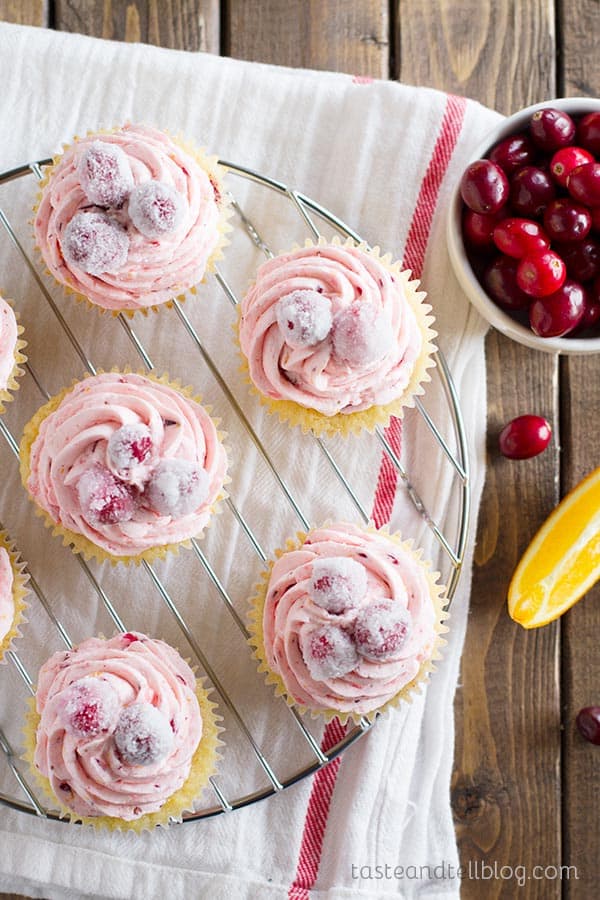 Well, as I pulled into the parking lot of the restaurant we were meeting at, I saw that there was a different cupcake bakery right next to the restaurant. Well, that makes things easier, right??

After our dinner, we headed over for a cupcake. I had been to this particular bakery (but different location) quite awhile ago and wasn’t very impressed, but it was convenient, and it was cupcakes. 🙂

The pickings were slim – only a few flavors to chose from. But they did have mini cupcakes, and I bought a cranberry orange cupcake, and another one that I can’t even remember right now.

On my drive home, I opened up the bag and pulled out that cranberry orange cupcake. I was pretty excited – I had been craving a cupcake, and I was excited about the flavor combination. But I was quickly let down. It wasn’t that the cupcake was bad. It just wasn’t good.

I knew that I had to go home and recreate my own version of that cranberry orange cupcake. 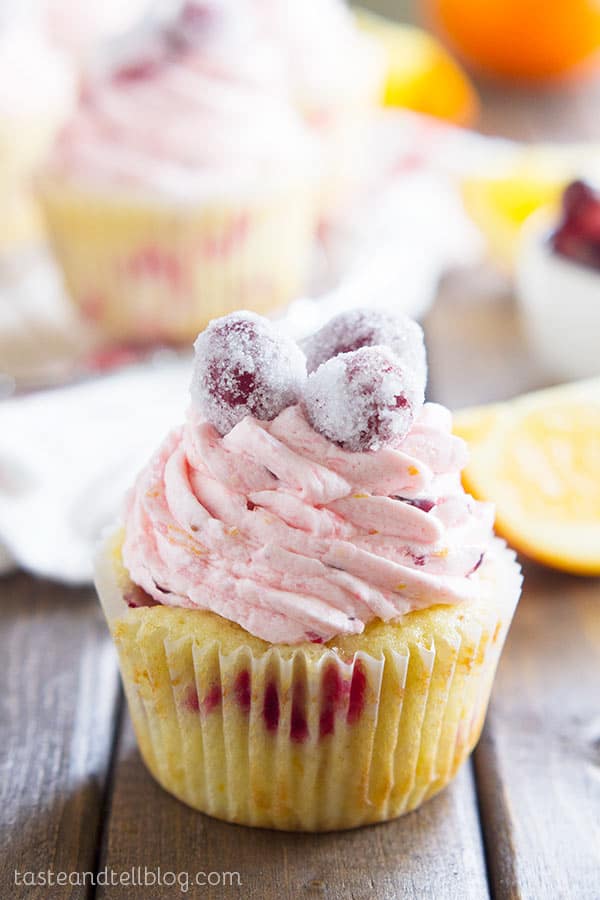 A few things about these cupcakes:

1st – I know this makes 14 cupcakes. It drives me crazy, too. You should have 12 or 18 or 24. Not 14, where you have a partially empty cupcake tin. But I wanted to keep the measurements simple, instead of having to do measurements like 1 cup and 1 1/3 teaspoons. Easy trumps the number, right? My normal cupcake recipe makes 12, but when you throw in the cranberries, it ups the amount of batter you have.

3rd – The buttercream on these cupcakes gave me a run for my money. It looked perfect, and then I stirred in the cranberries and it all fell apart. The buttercream broke and was not pretty like I was hoping for. The first time this happened, I tried adding more powdered sugar, but all I ended up with was a super sweet buttercream that was still broken. What ended up working for me was first – beating it like crazy. Like I beat it on medium-high for 5-6 minutes straight. It still wasn’t perfect, so I took a kitchen towel and ran it under the hot water, then held it up around the outside of my mixer bowl. That did the trick! The little bit of heat brought it back together and I had a beautiful, fluffy buttercream. It was a little bit softer than I normally like, so after piping it on the cupcakes, I refrigerated the cupcakes to set up the buttercream a bit. It worked like a charm!! If you don’t want to deal with the buttercream breaking, feel free to leave the cranberries out of the frosting and you’ll have just an orange buttercream.

4th – for the cupcakes, I roughly chopped the cranberries with my knife. I left them in mostly big pieces, just making sure each cranberry was at least cut in half. For the buttercream, though, I put the cranberries in my Blendtec and pulsed a couple times to break them down more. You want the pieces small enough so that you can still pipe the frosting onto the cupcakes.

5th – The sugared cranberries. I love these things, and will eat them like candy. I first made them back in 2007, and I just had to make some more to top these cupcakes. They don’t take a lot of effort, but you do start them the night before, so be aware of that if you choose to make them to top your Cranberry Orange Cupcakes.

Whew – that was a lot. But do you know what? I have to admit that I liked these Cranberry Orange Cupcakes about 100x more than that mini bakery cupcakes I bought. And they would be perfect for any holiday party or get together. I know I love to celebrate the season with a good cupcake!! 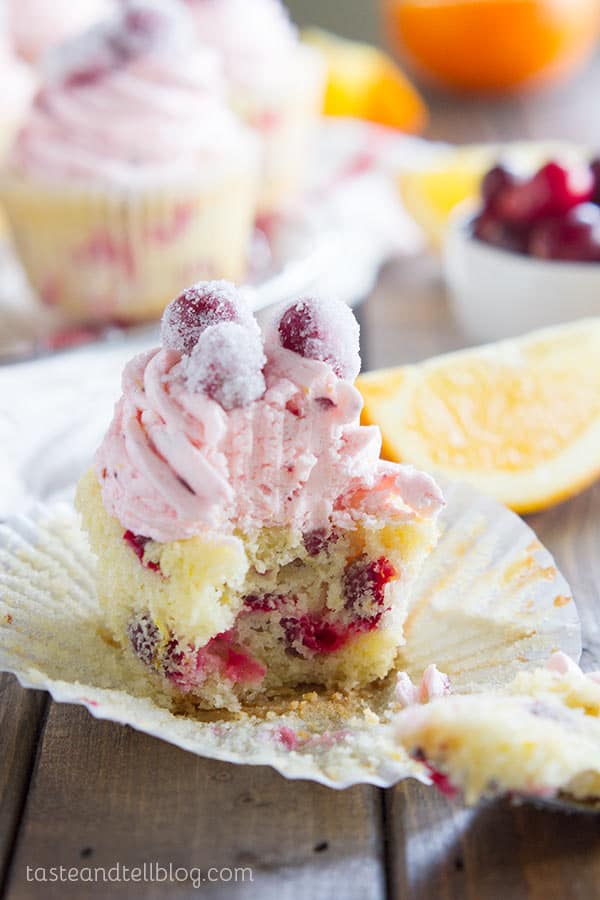 The perfect holiday cupcake, these Cranberry Orange Cupcakes are infused with orange zest and fresh cranberries, then topped with a silky cranberry orange buttercream. Make them even more festive by topping them with sugared cranberries.

To make the cranberries:

To make the frosting:

Total time does not include cooling time. Time to make the sugared cranberries is not included.

*If you don’t have superfine sugar, you can run regular granulated sugar through the food processor to break it down into smaller particles.

**regular milk can be substituted for the cream, but cream makes a richer buttercream, so it is preferred. 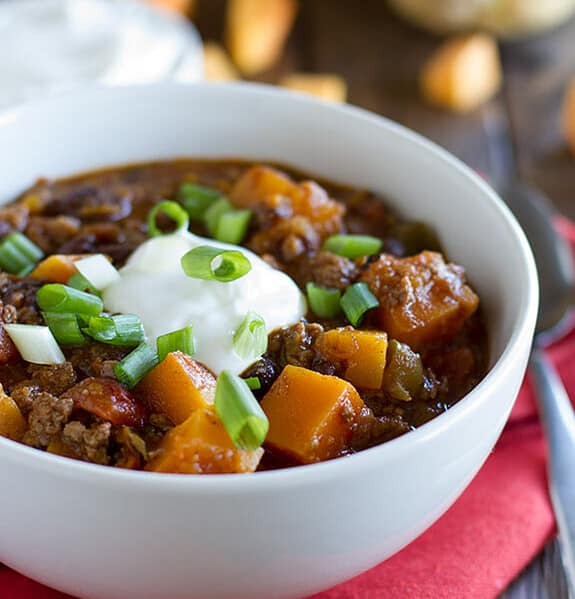