Lemon cupcakes are topped with a light pomegranate frosting and fresh pomegranate seeds in these light and refreshing Lemon Pomegranate Cupcakes. 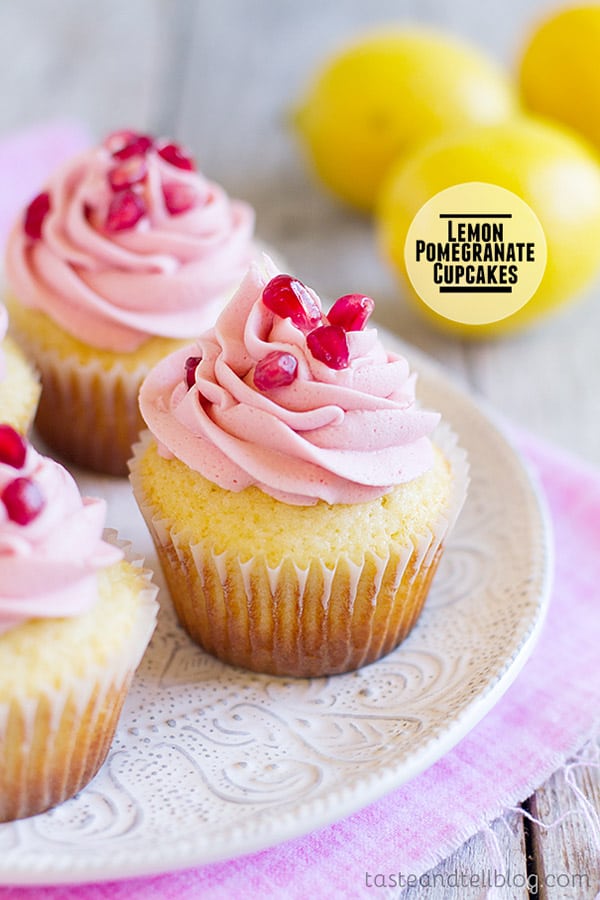 
It’s amazing how different two children can actually be.

My daughter – who is the oldest – was practically born talking. She was speaking in full sentences by the time she was 18 months. My next born, a son, is not a talker at all. In fact, I started to worry when he hit two years old and wasn’t fully communicating like my daughter did. The doctor smiled and told me that he was, in fact, quite normal, and that my daughter was just a talker. Even now, at 5 years old, she pretty much doesn’t stop talking, every minute she is awake, while my son is still a boy of few words.

My daughter is the most outgoing little girl that I think I’ve ever seen. During the course of a trip to the grocery store, she will become best friends with the girl in the other cart and she’ll chat up the checker all about every detail of her birthday. My son, on the other hand, is more of a loner. He’ll definitely stick by my side, but he’s more content to play by himself than he is in a group of kids.

If you offer my daughter a cupcake, she’ll ask for one without the frosting, while my son will just lick the frosting off the top of his, leaving the cupcake behind. They kind of remind me of that old nursery rhyme:

Jack Sprat could eat no fat. His wife could eat no lean. And so between them both, they licked the platter clean.

But at least I can say that with these Lemon Pomegranate Cupcakes, Abbi did love the cupcakes and Easton did love the frosting!!

I know that the only thing about these that is the least bit Valentine-y is the color, but I had been dying to try this flavor combination. I was watching an episode of Cupcake Wars one night, and one of the contestants made a blood orange cupcake with a pomegranate frosting. I’m sure there was a filling in there, too, but I don’t remember. And while I thought the idea of the blood oranges was intriguing, I know that for me, at least, those babies are hard to find. So I wanted to go with something a little bit more accessible.

And since lemons are in season right now, I decided to go that route. And what a beautiful combination the lemon and pomegranate are!!

One note – while you are making this frosting, it may look a bit curdled as it starts to come together. Keep beating until it is smooth and light – it will take several minutes. I think you’ll love these Lemon Pomegranate Cupcakes as much as we do! 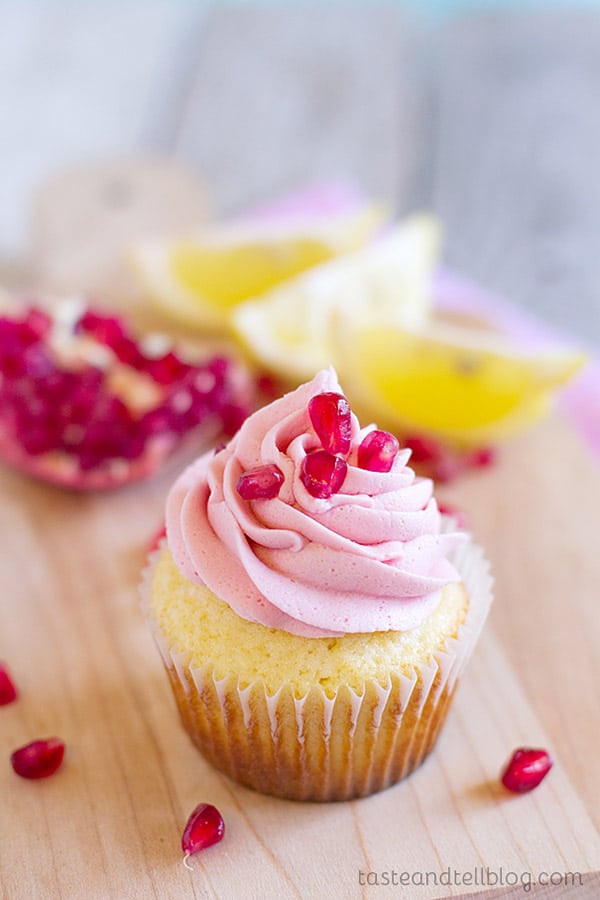 Lemon cupcakes are topped with a light pomegranate frosting and fresh pomegranate seeds for a light and refreshing cupcake. 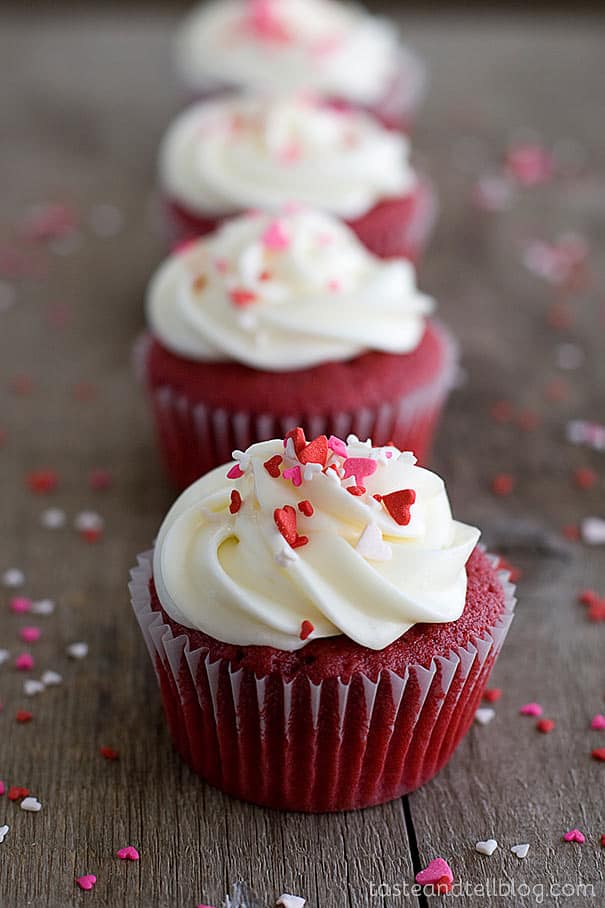 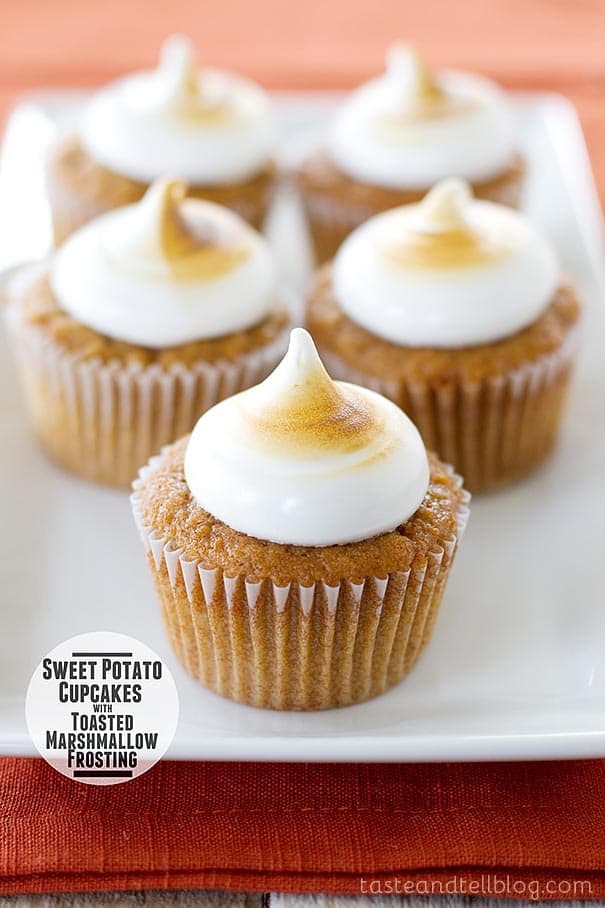 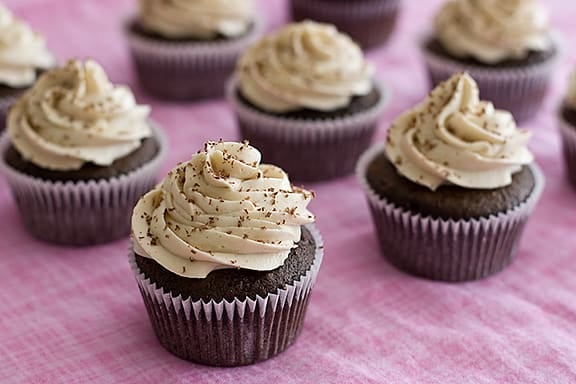 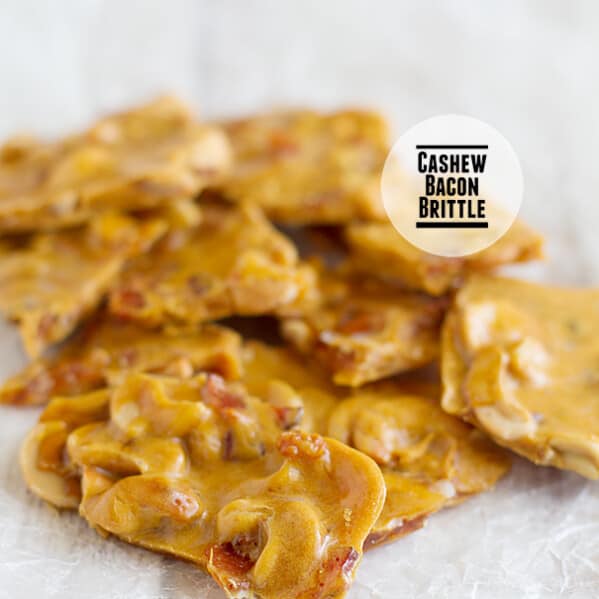 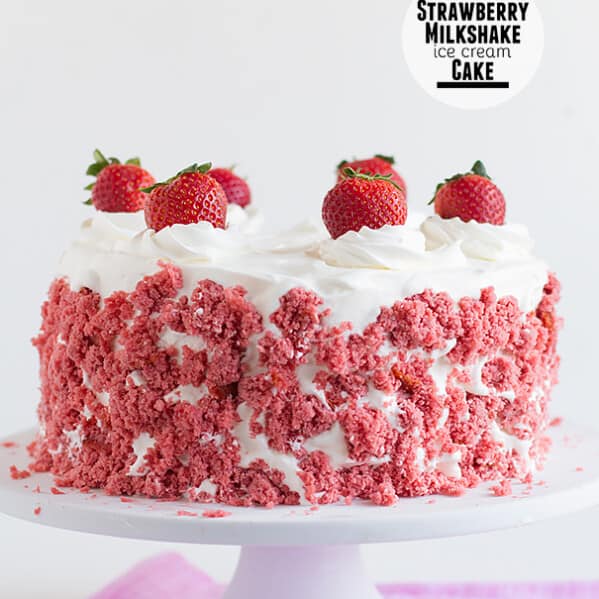