Home / Destinations / Where to Eat

Heading to the California coast? This is your guide to Venice Beach, California. 3 must try restaurants, where to stay, and what to do! 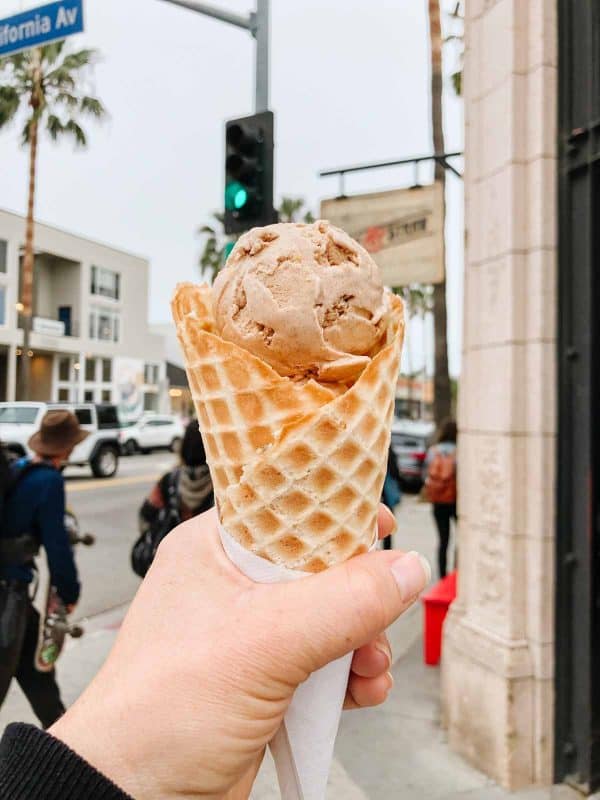 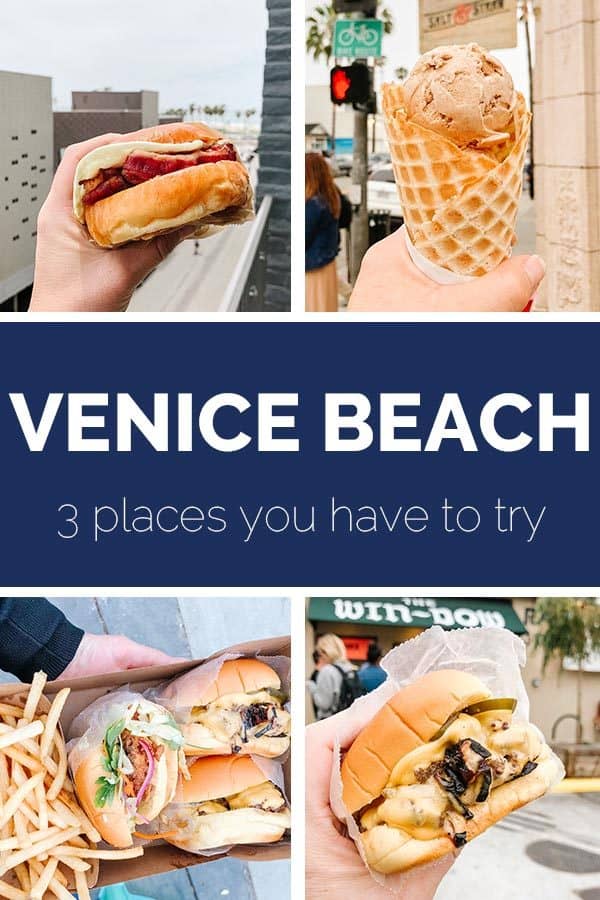 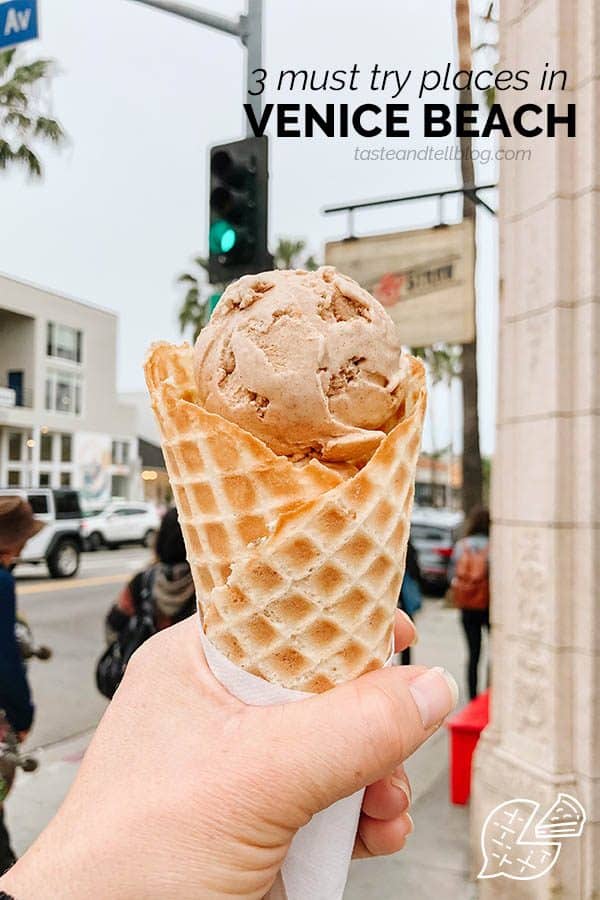 The thing about travel is that it is pretty unpredictable. As much as I wanted to plan out this whole weekend in Venice Beach California, it didn’t quite pan out exactly as I had planned. Luckily, it was a great weekend regardless!

I had to be in Los Angeles (actually Hollywood) for work, so we decided to fly my husband down after I was finished and turn it into a weekend getaway. I wanted to go somewhere I hadn’t been before, and somewhere on the beach.

So we ended up in Venice Beach.

Here’s the thing, though. I had no idea how young, hip, and eclectic Venice Beach was. I’m a middle aged mom to 3 and I have to be honest – I didn’t really feel like I fit in there. In fact, I contemplated not photographing or videoing anything, simply because it’s not really one of the family friendly locations I like to feature. But after spending some time there, and eating some good food, I decided I needed to share. Because that burger below is enough of a reason for me to head back to Venice Beach. We were able to roll with it and ended up having a great weekend.

So here is what we ate, where we stayed, and what we did.

then get all of the details below!

What to Eat in Venice Beach California

I had a list of places that I wanted to eat in Venice. And we didn’t hit all of them. Haha. We actually didn’t care for the place we ate on Friday night, so it’s not worth mentioning. And then on Saturday, I decided to let my husband sleep in, since he never gets to at home. So we ended up eating breakfast for lunch, lunch for dinner, and of course dessert. So we may not have hit a lot, but we hit some good ones! 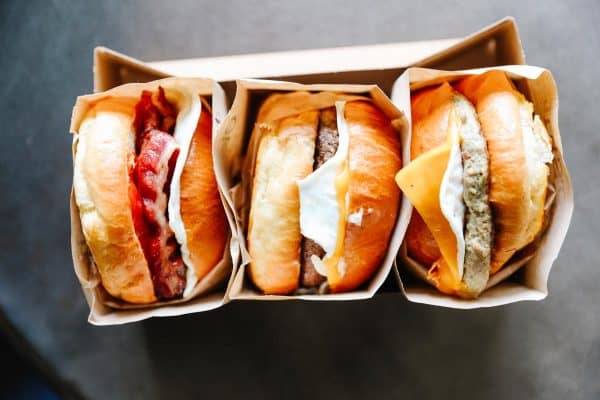 Ok, so I had to look up the reason why this place is called Eggslut. I read that the owner said that it means “someone who loves eggs so much, they can eat them all day, all night, wet, hard, coddled, easy and with everything.” Well, I’m definitely an egg lover, so this one went on my list. And the Venice location just happened to be right next to our hotel, so we had to try it out. I had heard everything from “it’s the best breakfast sandwich you’ll ever have” to “it’s overrated”. Since we needed to judge for ourselves, we got a few breakfast sandwiches, a burger, and their signature “slut”.

My husband said the burger was fine, and he liked the Sausage, Egg and Cheese. I had the Bacon, Egg and Cheese and thought it was good. I’m not sure I was totally in love with the chipotle ketchup, but it was good. Messy, but good. And the slut was super interesting. It consists of a coddled egg cooked on top of a potato puree. It is cooked inside a glass jar, then served with crusty bread. I had definitely never had anything like it before, and I really did like it.

It was all really good. But I don’t know if I’d be going out of my way to rush there next time I’m in California. (PS – they also have a location in Las Vegas!) They were good breakfast sandwiches. Maybe not the very best I’ve ever had, but I’d definitely eat them again! 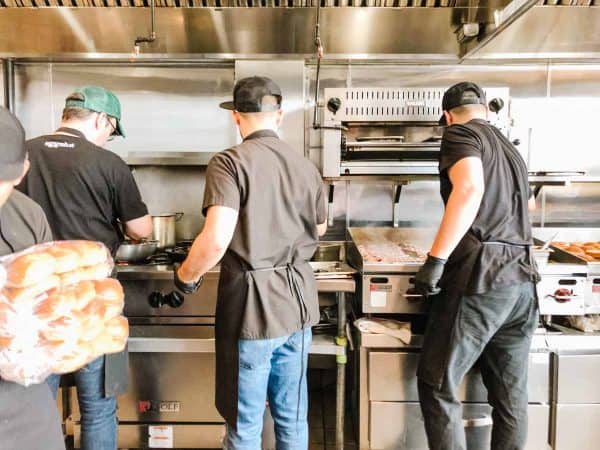 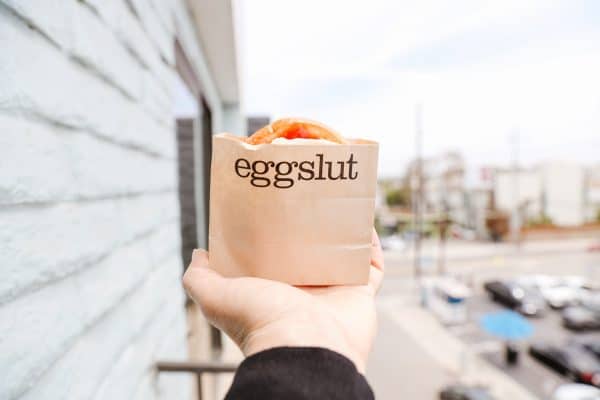 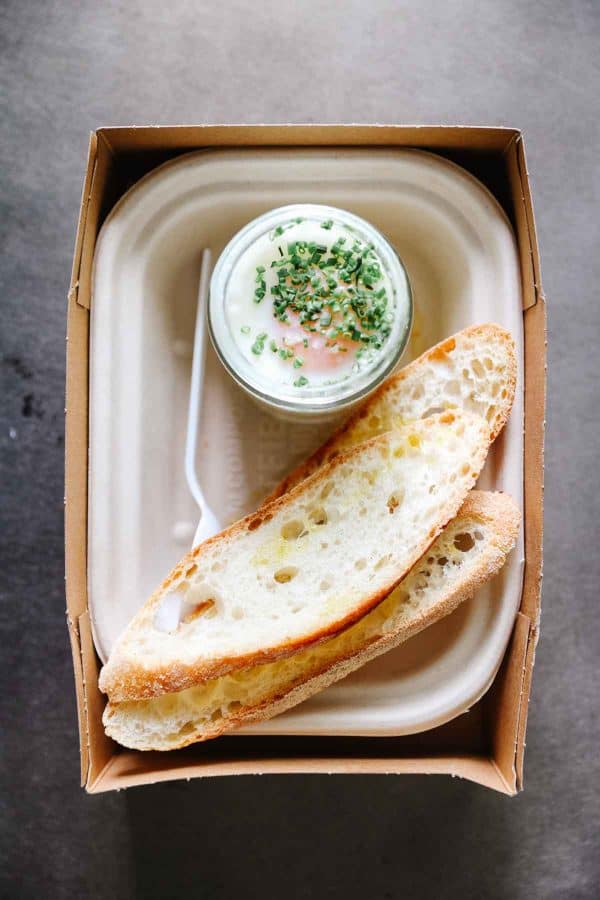 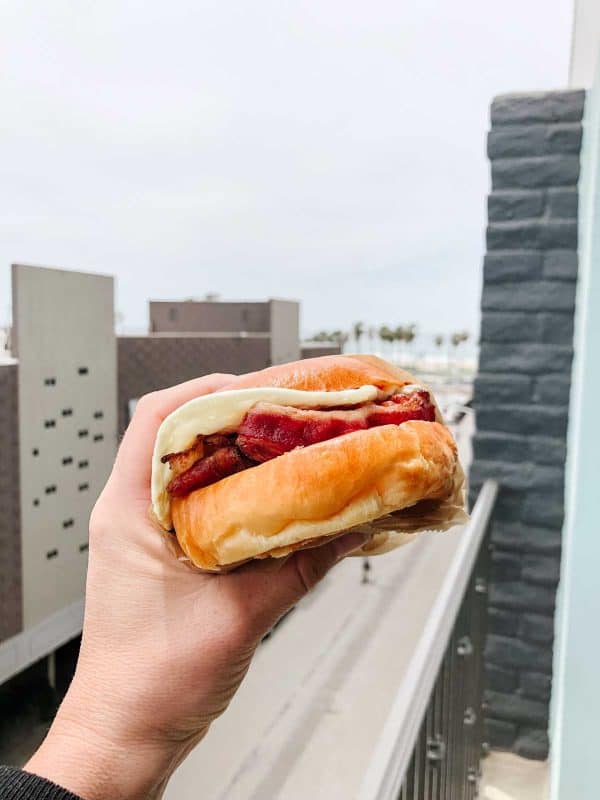 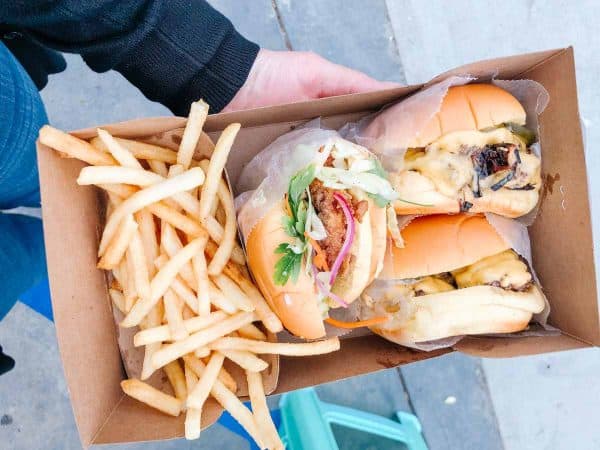 I don’t remember how I came across The Win Dow, as it just opened a few months ago. But I am SO happy that I did. This is a casual burger restaurant – it is just a walk up window. There are some plastic chairs set up outside, but not even a restaurant to go into. You walk up to the window and order off of a very short menu, then you’re name is called from the second window when your food is ready.

They may be new, but there was a steady stream of people coming the whole time we were there. And it was even sprinkling outside.

We tried both the burger and the chicken sandwich. I couldn’t tell you which to get because they were both great. My husband claimed that the chicken sandwich was one of the best he has had. And if I had to choose between In N Out, Shake Shack and this burger, the burger from The Win Dow would win. I’d definitely go back to eat there again. 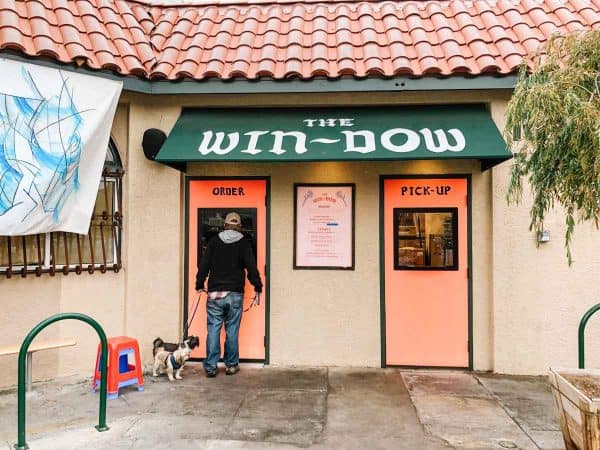 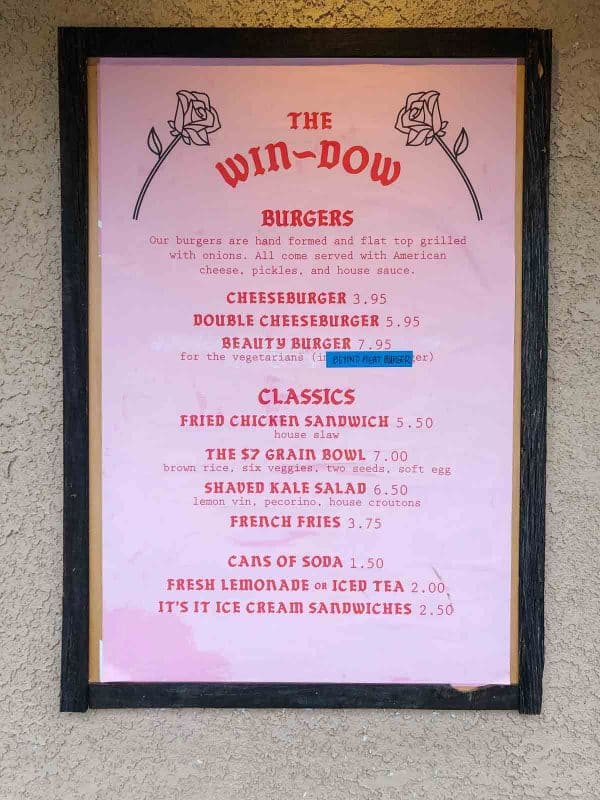 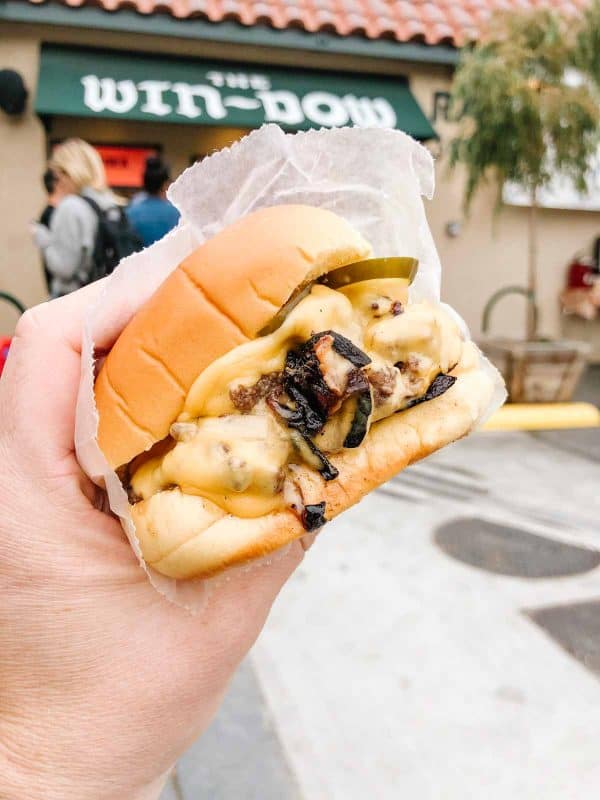 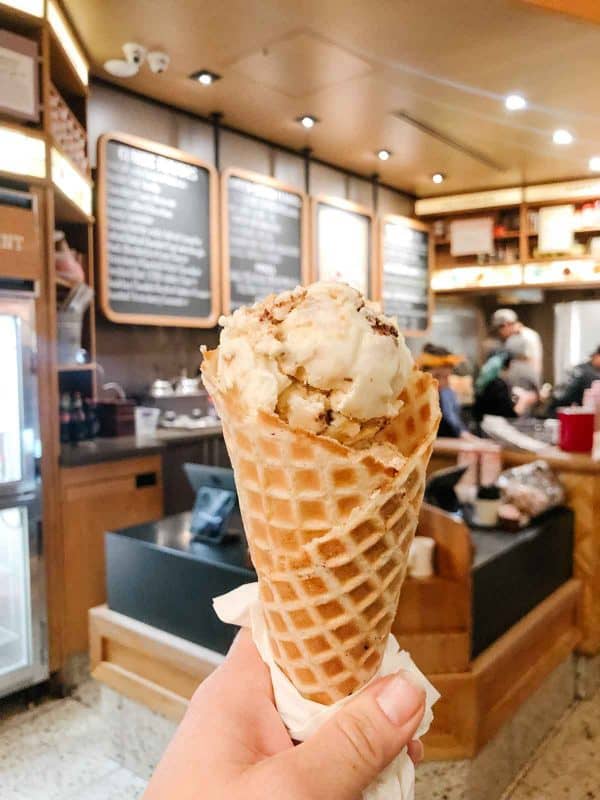 I should probably be embarrassed, but I had ice cream from Salt and Straw three times in four days. I had it while I was at my conference, and then when I saw there was a location within walking distance from our hotel, I had to take my husband. I was a big nervous because he is pretty picky when it comes to ice cream. But he claimed it was some of the best ice cream he has ever had. So of course, we had to go back again the next time.

I tried quite a few flavors, but I must know what I like because all three times I ended up getting the same thing – a half scoop of snickerdoodle and a half scoop of Almond Brittle with Salted Ganache. I don’t eat ice cream very often because it doesn’t love me back, but I happily ate all of my ice cream – all three times. And I’ve been dreaming of it ever since.

This is an ice cream I’d gladly go out of my way for. And stand in line for. Since there was a line every day at the Venice location. 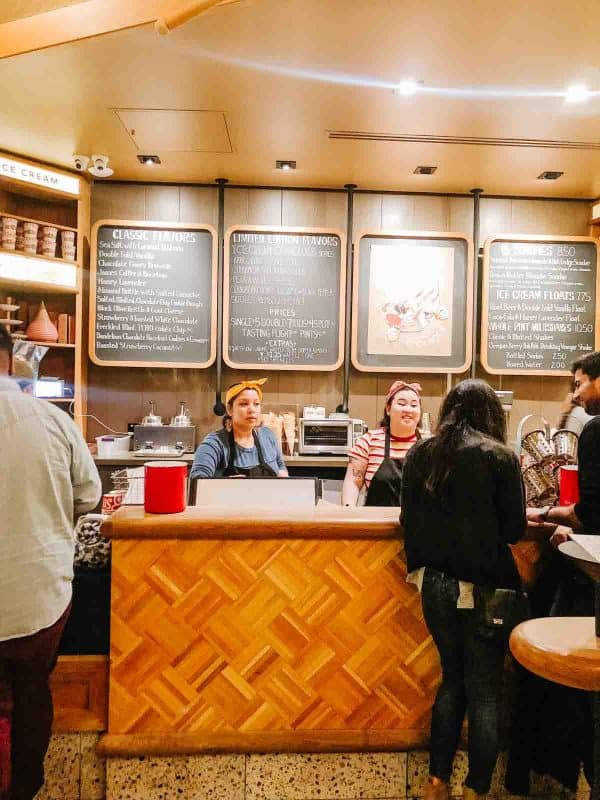 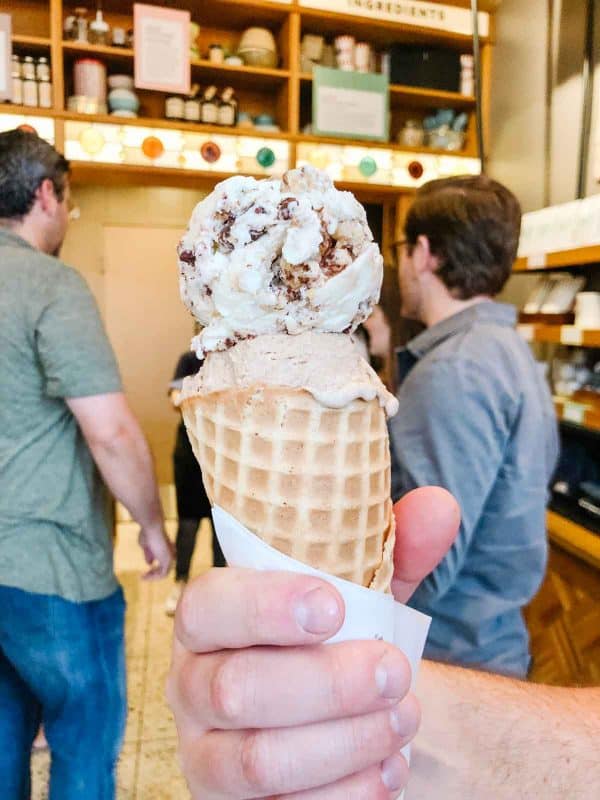 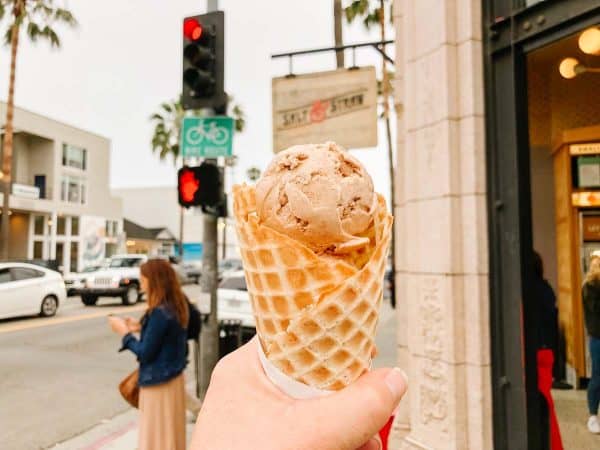 Where to Stay in Venice Beach California 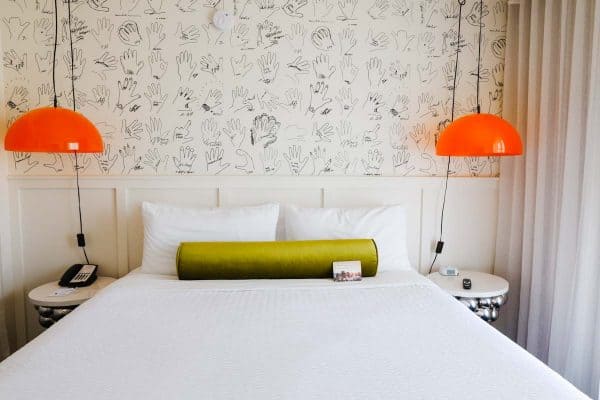 For our weekend, we stayed at Hotel Erwin – located just steps from the Venice boardwalk. I had done a lot of research because I knew I wanted a hotel close to the beach.

I ended up booking through hotwire because I was able to do some sleuthing to figure out what hotel the deal was for. (PS – it really wasn’t hard to figure it out!) I got a decent deal – especially since it’s a 4-star hotel on the beach.

When I got there to check in, they even upgraded my room to a suite, so that was a great surprise!

The hotel itself is super hip. I had read about the rooftop bar beforehand, but didn’t realize what a hot spot it actually was. The hotel only has one elevator, and there were constantly people going up and down to the roof. It wasn’t a huge deal, but we did end up taking the stairs a few times because there were either too many people or we were having to wait too long. But overall, it was only a minor inconvenience.

The room was great – and huge! We had a small kitchen/dining area with a table and chairs, sink and refrigerator, then the living space with a huge couch and tv. The bedroom wasn’t huge, but it worked. And the bathroom was a bit small as well, but was fine for the two of us. And even though the rooftop bar was such a hot spot, I never heard any noise from it, so the room was pretty quiet. Our room did have an ocean view – sort of. There was a very small balcony area and when you went out you could look over to the ocean and the boardwalk.

I wouldn’t recommend this hotel for kids – it definitely caters more to adults. But if you are there as a couple, or for a girls weekend, it would be a great place to stay. 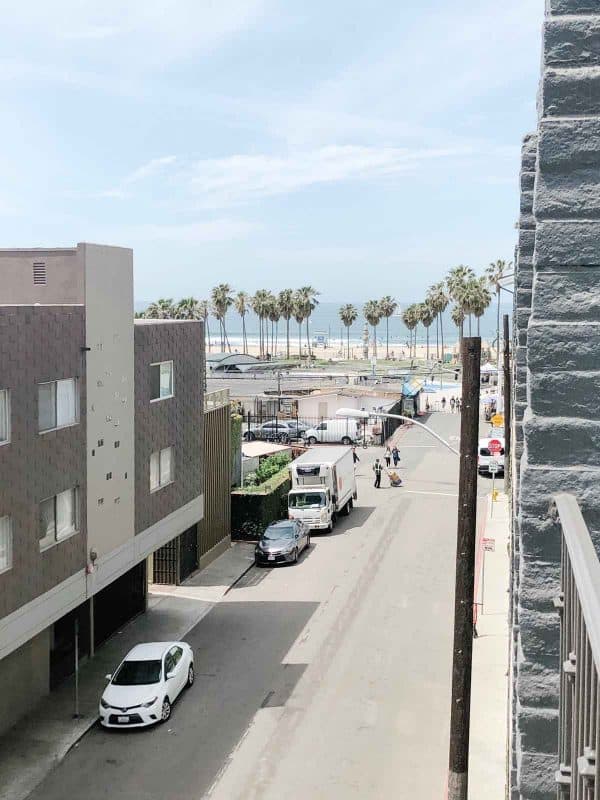 What to Do in Venice Beach California 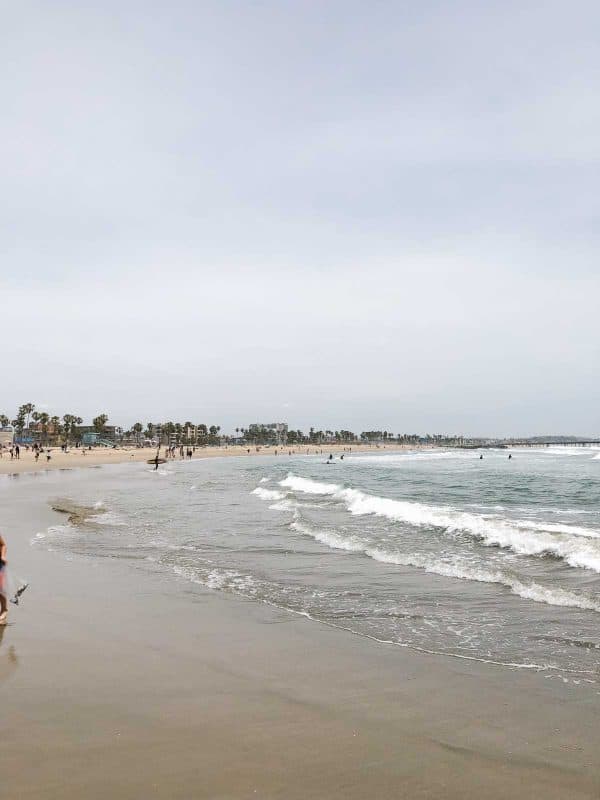 Ok, so truth be told – we didn’t do much of anything. And it was glorious! Since we slept in, we ended up just taking it easy all day. We ate some (of course), we walked around the boardwalk for a bit, and spent some time walking up and down the beach. But if you want to put a few more things on your list, here is the list I went into the weekend with. 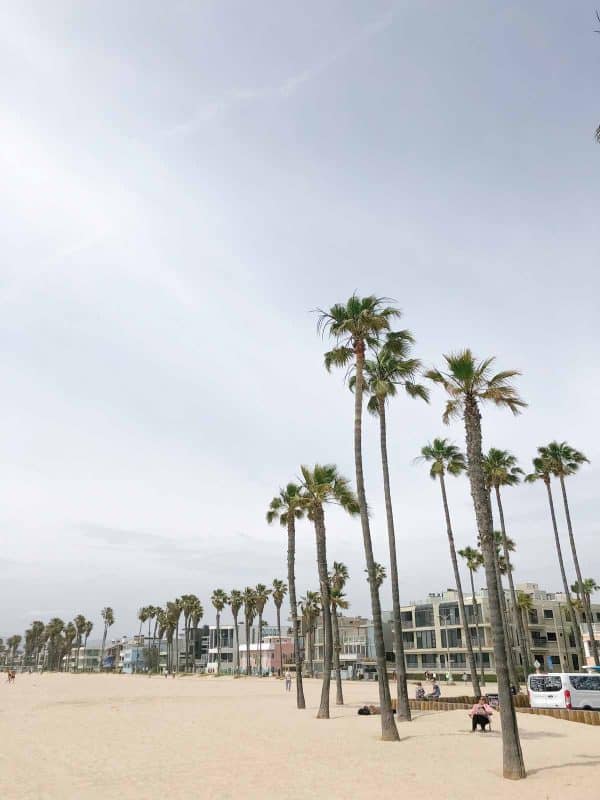 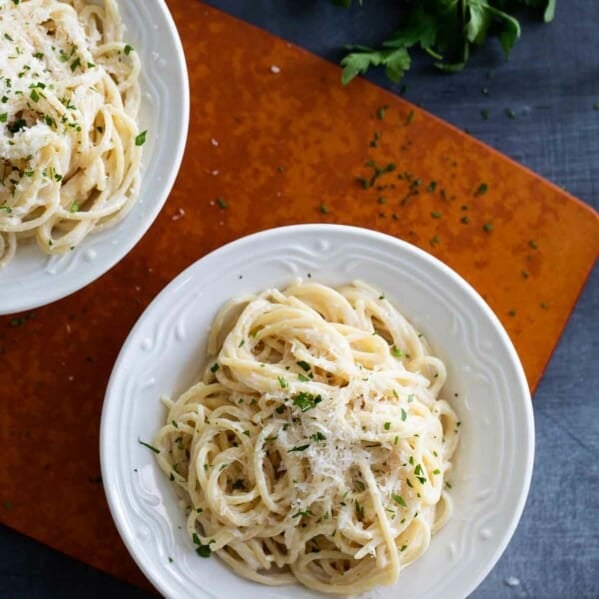