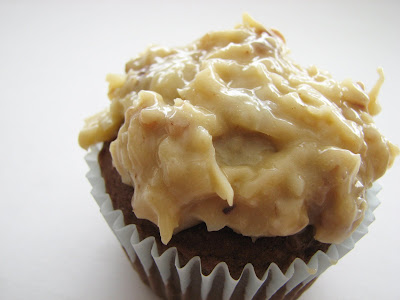 I have another cupcake recipe, but I’m going to announce the contest winners first – since that’s so much more fun!!

I wasn’t going to announce which cookbook I chose until the beginning of April, but then I realized that it wouldn’t hurt to announce the Cookbook of the Month for April early. Let me tell you – you all left me some amazing recommendations, and it was really hard to choose just one. I think this contest was a bad idea, because now my cookbook wish list has grown by leaps and bounds. I might have to get a night job to cover the cost of all of the cookbooks I want to buy now!! If any of you are looking for a new cookbook, you should check out the comments on the contest post because you will get some great ideas. I was leaning towards choosing a cookbook that would teach me to make some authentic food from another country. Some great ones were suggested, like Morimoto: The New Art of Japanese Cooking, Memories of Philippine Kitchens, and China Modern. These would all be great choices since I don’t know anything about authentic Japanese, Filipino or Chinese cooking. Many of Dorie Greenspan’s books (besides Baking, which I already own) were suggested and raved about. And also Nigella – who has been on my want list for quite awhile now.

But I could only choose one – and I’m really excited to check out the one I decided on. And the winner is – The Pastry Queen by Rebecca Rather and Alison Oresman. The only bad thing is that 2 people suggested the same book, and since I can’t afford to send one to each person, I have to go with the first person – Ashley from Delish. Ashley will be receiving the first prize – a copy of The Sweet Melissa Baking Book. If you’ve been on any of these blogs in the last week or so, you will have found some stellar reviews of this book that was just released. I just had to get myself a copy, and I thought this would make a great prize for the person who helped me choose my next cookbook of the month. And since Gabi at The Feast Within also suggested The Pastry Queen, I felt bad not giving her anything, so she will be receiving a small gift. Congrats girls!

The winner of a copy of April’s Cookbook of the Month – The Pastry Queen – was chosen by a random generator. And the winner is Ginny from Just Get Floury. Congratulations Ginny!

Now onto the cupcakes!! If you remember a post , I made a couple of weeks ago about a chocolate cupcake that didn’t work out – this was the original recipe that I had issues with the first time around. So I’m not going to talk about the cupcake itself, because I ended up just doing a box mix, but the frosting does need some attention! 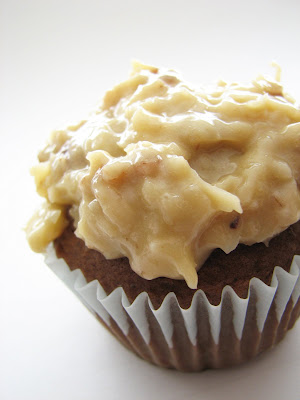 I am a German Chocolate cake fan. In fact, give me just about anything with coconut and I’m sold. But my problem with most German Chocolate frosting recipes is that there is not enough coconut. Maybe I go a little overboard in other’s minds, but I usually end up adding a lot of extra coconut. This recipe was no exception. It was delicious, but I did end up adding about a cup of extra coconut. And then it was perfect. I actually ended up eating the leftover frosting by myself just with a spoon, and there was a lot of extra frosting!! And this is one of the few recipes with nuts that actually got eaten by my co-workers. They must have not been able to see the nuts because of all the coconut… 🙂

In a medium saucepan, stir the half-and-half and butter over medium heat until the cream is hot and the butter has melted. A bit of steam will just begin to rise from the mixture; do not let it boil. In a large bowl, whisk the egg yolks, sugar and salt until smooth. Whisking constantly, pour the hot mixture into the yolk mixture. Return it to the the saucepan and cook over medium heat, stirring constantly, until the custard thickens and reaches 165F on a thermometer; it should leave a path on the back of the spoon when you draw your finger across it. Remove the pan from the heat and strain into a medium bowl. Stir in the vanilla, coconut, and pecans.

Cover the frosting loosely and refrigerate until it is cool and thick enough to hold its shape on top of the cupcakes, about 1 hour.

Let the cupcakes sit at room temperature for 20 minutes before serving. 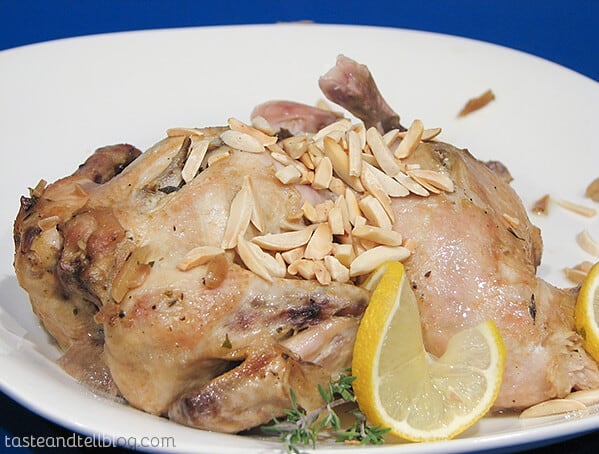