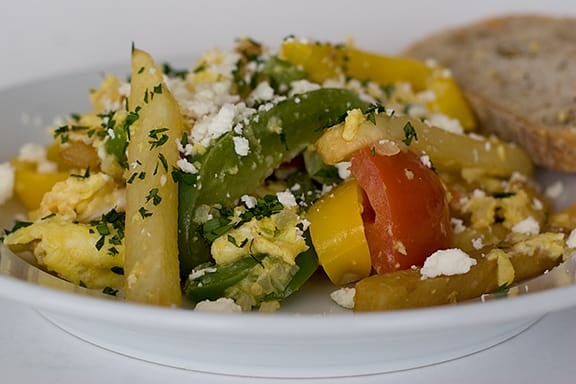 This recipe is a one that reminded me once again that I need to always read through the entire recipe before I start. I read the header, which said something about every Greek mother having a recipe like this in their repertoire that they could throw together after a long day. I thought, wonderful – those are the kinds of recipes I love! I read all the ingredients to make sure I had them on hand, and that’s all I read. Until I went to make this meal. And then I realized I had to make French fries – deep fried and all. And not only that, but I had to fry them at a lower temperature, let them rest, then fry them again. Needless to say, it wasn’t nearly as quick as I had thought it would be!! 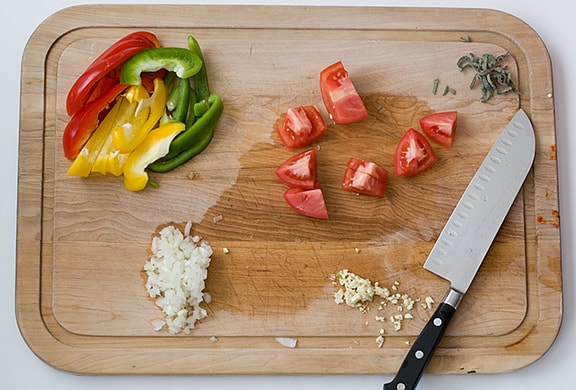 Although it was a bit of work with the fries, this dish was delicious. Now, I don’t know much about Greek food, but I can totally see this as Greek comfort food. Potatoes, eggs, vegetables – and just a sprinkling of cheese on top. I actually made this as a brunch dish for myself one day, and I think it makes the perfect brunch!

I only made a quarter of the recipe since I was only feeding myself. (Except I did make extra French fries. If I was going to go through all of that effort, I wanted some left over to snack on!) And even though the recipe says it feeds 4-6, I would say the whole recipe would easily feed 8. I only ate half of the portion I made, and I was stuffed all day! 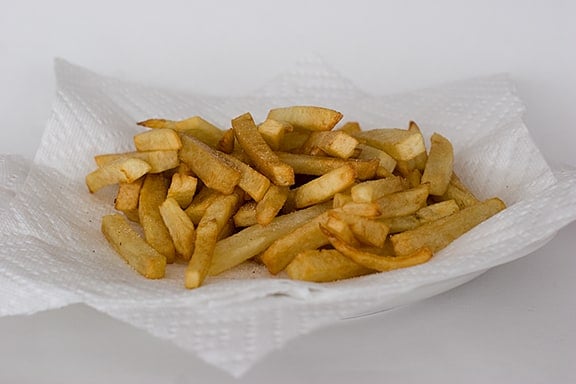 Potato, Egg, Tomato & Peppers
from How To Roast A Lamb 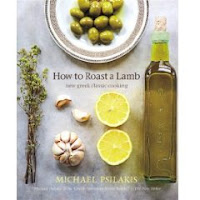 To deep-fry the potatoes, place the potato batons in a large bowl of cold water in the sink. Rinse very thoroughly under slow-running cold water, until all the starch is removed, about 20 minutes or until the water runs clear. Dry the potatoes between kitchen towels.

Pour several inches of oil into a large deep saucepan. Heat over medium-high heat until the oil reaches 250° on a deep-fry thermometer. Fry the potatoes, in batches if necessary, until potatoes are tender but have not colored. Remove and drain on paper towels. Hold in the refridgerator, uncovered, for up to 4 hours.

Heat the oil to 375° and fry the potatoes a second time, until golden brown. Drain on paper towels, and season with salt and pepper.

In a large skillet, warm the olive oil over medium heat. Add the onion, peppers, sage and garlic. Cook until soft, about 3-6 minutes. Add the tomatoes and vinegar, and continue to cook until the liquid evaporates. Add the fried potatoes, then pour in the beaten eggs. Let cook undisturbed for 1 minute, then begin gently scrambling the mixture until it reaches desired consistency. Just before serving, scatter with fresh herbs and feta. 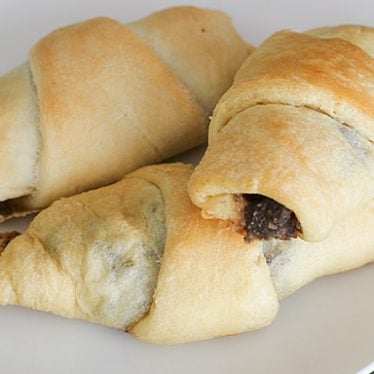 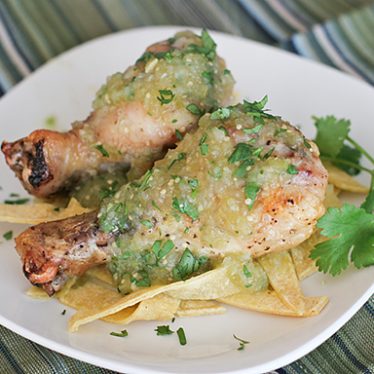