Sweet and savory, these Slow Cooker New England Baked Beans make the perfect side dish for any summer bbq. 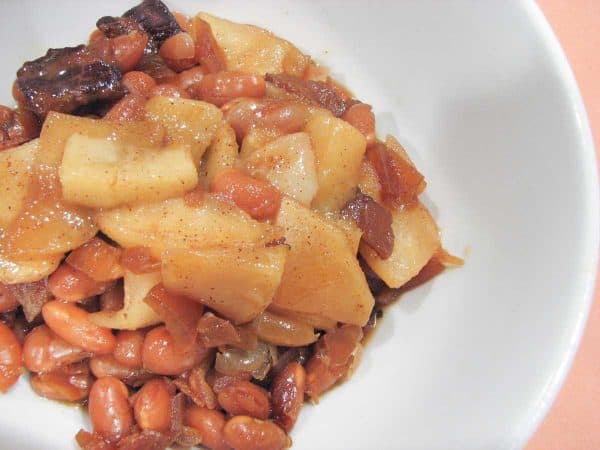 This is the 3rd installment of this month’s Cookbook of the Month – we’ve done the soup, the main, and now it’s time for the side dish. There were so many tasty ones to choose from, but I ended up going with the New England Baked Beans for one main reason. We don’t eat a ton at dinner. We are more likely to eat a big lunch and then just a small dinner. I knew that by making a whole big side dish, I wouldn’t want to also make a huge main entree, because we would end up with tons of leftovers! So I picked these beans, thinking we could eat them as the main meal.

The one complaint I have with this cookbook is that it is not very specific. This recipe calls for dried white beans, a couple apples, and a couple pears. So I’m at the grocery store, looking at the dried beans, and I realize I have no idea which kind of white bean works best for this recipe. I close my eyes and choose one – ending up with Great Northern beans. As far as the apples and pears went, I just chose what looked the best that day. I find it funny that the recipe specifically calls for a yellow onion, but doesn’t even give suggestions as to which kind of white beans to use. After I had already started the recipe, I decided to do some online research. I obviously haven’t had baked beans in quite some time! I did a search to find what beans work best for baked beans, and I discover that navy beans are suggested. I realized right then that I might have a problem, because navy beans are smaller than Great Northern beans. The recipe says to cook the beans in the slow cooker for 6 to 8 hours, and I had set the timer for 7 hours. The 7 hours were up at this point, and the slow cooker was just on warm, so I rushed into the kitchen and turned the slow cooker to high, knowing that we should be eating in an hour, and that my beans would not be softened completely because they were bigger. I was right. Even after turning the heat to high, the beans were not soft like they should have been. I would definitely suggest going with the navy beans, or plan on cooking this longer than 7 hours!!

This recipe says it serves 4, but as a side dish, I would think it would serve 8-10 at least. It probably would have served 6 of us as a main dish! I also wouldn’t suggest serving this as a main meal. It is quite sweet. I think they would go perfectly alongside a good hamburger or a bbq sandwich at your summer picnic. But they are a bit too sweet to be served alone. Plus, you will disappoint your significant other when he finds out that all he is getting for dinner is beans!!

Sweet and savory, these Slow Cooker New England Baked Beans make the perfect side dish for any summer bbq.

*I didn’t leave my apples in full slices, but half slices. I think it worked better this way to make smaller bites so you don’t get too much fruit in each bite.

**Same thing as the apple slices, but I also wasn’t paying attention and peeled my pears, too, even though it didn’t say to. It still worked.