Sign Up
Home / blogger spotlight
Today’s Blogger Spotlight is Angi from Rice & Wheat.  This is when I am so grateful for Twitter, because that is how I found Angi’s blog!  Gorgeous photography and delicious food – you couldn’t ask for more!!

I’m a grad student living in San Francisco with my husband Nathan and our cat Toro. When I’m not working on research (ahem, shame on me – I should _always_ be working on research), I try to cook my way around the world. I love learning about traditional home-cooked dishes from every food culture in the world because I find those to be the most soulful and beautiful recipes. Basically, think of what moms and grandmas everywhere have been cooking for ages and that’s what I aim to feature on Rice & Wheat. Hmm, is that sexist? How about “parentals” and “grandparentals”?

What inspired you to first start writing your blog? What kinds of posts are your favorite to write?

When I started my blog back in 2007, I honestly thought of it as nothing more than a recipes journal that I can share with my friends and family when they ask me for recipes. Over the years though, the blog has evolved quite a bit and apparently, people who don’t know me read it now – crazy, I know! These days, I like to write about stories and memories I have about food, interwoven with recipes I’ve cooked recently.

Do you plan a weekly menu? If so, what inspires your menu?

Not exactly. We get a weekly vegetable box from our CSA subscription, so that becomes the #1 inspiration for our cooking, e.g. “Ohhh, the spinach is about to go bad… I guess we’re making palak paneer tonight!” I actually find it a fun challenge to stand in front of the fridge and figure out, on the spot, how to combine various ingredients into a dish. It doesn’t _always_ work but I’ve gotten better at it with practice. Lest you think we’re completely ruled by our vegetable box though (ok, at times, I actually do think this), I also have about a gazillion recipes bookmarked in cookbooks/magazines/blogs, so that is another huge source of inspiration to me.

What is your favorite recipe posted on your blog?

Yikes, what a tough question! I guess right now, it’d be the post on Dan Dan Mein. These noodles are so simple, super flavorful, and homey. On top of that, the search for this recipe took some serious sleuthing and I still don’t know what to tell my mom about the recipe she sent me. (If that didn’t make any sense, just go read the post.) 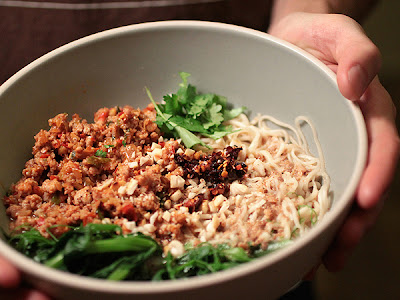 Where do most of your recipes come from? (Family favorites, you make them up, magazines, cookbooks, etc.)

Mostly from my cookbooks, blogs, and Saveur magazines, although I often tend to change some things to put my own spin to them. Since I focus on food from all over the world, I’m also starting to get pretty good at using Google Translate to figure out recipes written in foreign languages. I have no doubt that’s going to result in some hilarious, spectacular failures at some point, so stay tuned!

What would you eat as your last supper?

I never go to buffets normally because I tend to stuff myself silly and that’s just not a good scene for anyone. But if it’s my last meal, I’m going to make an exception. I would like to request a buffet of something representing every major food culture. Is that a bit greedy, you ask? Most definitely. But hey, it’s my last meal. EVER. Stop judging me.

What kind of camera/lens/equipment do you use?

Until this past fall, pretty much all the photos on my blog were shot using a Canon Powershot SD750. Then in October, because I was participating in a blogging competition (Foodbuzz’s Project Food Blog) and I wanted nicer photos for my entries, I borrowed a Canon Rebel for a few weeks – sweet! When I had to give it back, I was sad. But not for long because ….I got a new camera! It’s a Panasonic Lumix GF1 with a 20mm F1.7 pancake lens – not a very traditional choice for food photography, I know, but I’m totally in love with it.

What kind of food did you eat growing up?

I grew up in Hong Kong, so 99.9% of the food I was raised on is standard Cantonese home-cooking: steamed fishes, stir-fries, soups, and always rice. Once we moved to the States, there would sometimes be “western-style” meals when my mom tried out exotic recipes (read: tuna casserole) coworkers gave her or the occasional visits to the local Mexican restaurants (we lived in Texas). These days, I have to admit I rarely cook Cantonese food at home, although I’m definitely hoping to learn more about it. You know, to bring honor to the family and all that.

What was the first dish you ever cooked?

It must have been back in high school. I remember seeing a random, spiral-bound Japanese cookbook on the bookshelf and decided to cook something from it. I ended up choosing a Japanese version of fish en papillote, mostly because well, who doesn’t love little presents-esque packages? What I ended up was…well, I guess it was edible. I didn’t know anything about tasting and seasoning food back then, so if we’re being nice, we would say the fish was underseasoned. If we’re being Top Chef judges, we’d act personally offended that I didn’t taste the fish before it got plated. Thankfully, this happened in the pre-Top-Chef era and my parents+sister were troopers – they ate it all up without a word of complaint!

When you really want to cheat, what do you eat?

I always keep a stock of frozen Chinese dumplings in the freezer (either homemade or store-bought), so on a night when I’m too tired to cook, I just fry a bunch of them up and eat them with rice. It’s not exactly a well-balanced meal, so as much as I want to, I can’t really recommend an all-dumplings diet. Oh and every so often, I turn to natto for a quick meal. Hmm, I hope I haven’t just lost all my followers with that.

Thank you Angi, for letting us learn a little more about you!!  And here is where you can find Angi: 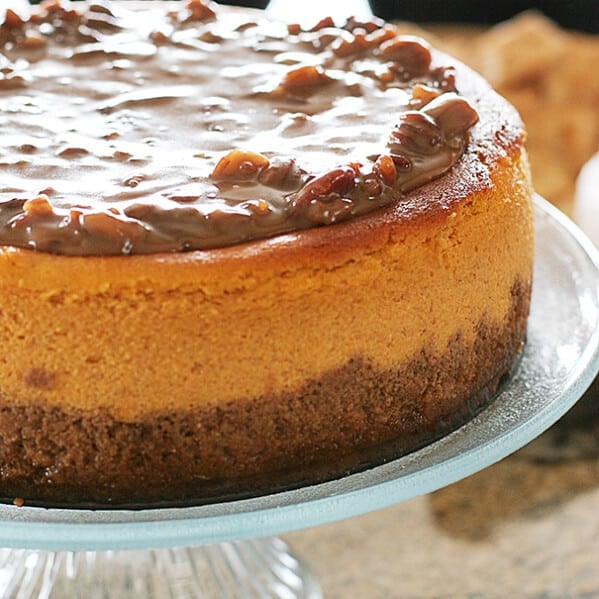 Next Post
Cookbook of the Month Recipe – Banana & Hazelnut Tart