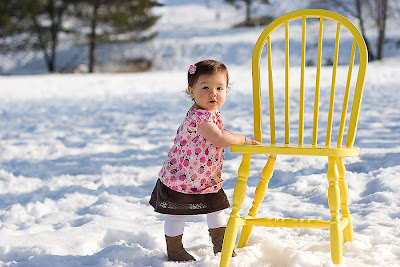 I talk about my daughter on this blog quite often, but I realized just the other day, that I haven’t put a picture of her on here since she was born a year ago! My baby girl celebrated her first birthday last week. I can’t believe it’s already been a year, and how much she has grown.

I have been thinking about her first birthday party for months. Her nickname is Bug, so I knew I wanted a ladybug theme. I found lots of cakes that I liked, but one in particular stood out to me. I set to work planning, and a ladybug birthday party came together. Most of the ideas and recipes came somewhere off the internet, so I’ll be listing lots of links today. I don’t plan parties very often at all, but this was so fun (but a little stressful!) that I can’t wait until I can start planning her second birthday party! 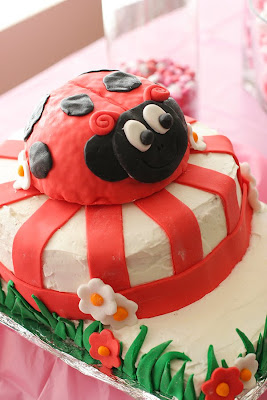 The design for the cake was copied from a cake I saw on flickr. I fell in love with it, and even though I have only worked with fondant once before, I decided to go for it!! 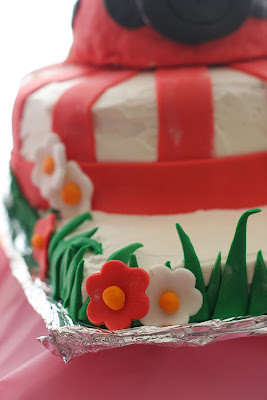 I used cake mixes for the cakes. I still don’t have a “go-to” cake recipe that is fail proof, and I didn’t have the time or energy to risk trying one that might or might not work out. So cake mixes it was! The bottom cake was chocolate, then the middle round cake was white cake with a blackberry whipped cream filling. The ladybug is actually a rice crispy treat (the things you learn from Food Network!) covered with fondant. I wish I would have iced the rice crispies first, since it’s not smooth because of the texture, but lesson learned! 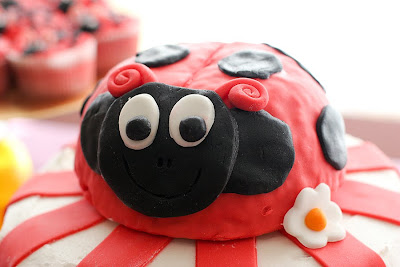 All of the fondant except the black was the marshmallow fondant recipe I used before. This is super easy to work with, and actually tastes pretty good!! The black fondant was also a marshmallow fondant, but was a lot harder to work with. I had to add a lot more powdered sugar than the recipe called for, and even then, the fondant was super soft and didn’t keep it’s shape very well. But it was very black – which I was afraid I wasn’t going to be able to accomplish! The rest of the icing is just a basic buttercream. 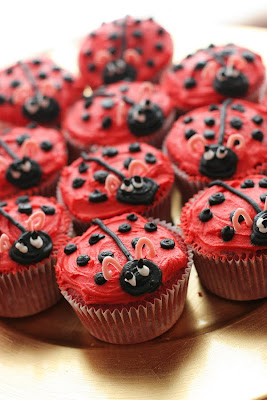 You would think that I would realize there was plenty of cake, but I also wanted to do ladybug cupcakes. Again, the design is stolen from some other cupcakes I saw online. The cupcakes were red velvet, and the frosting was a basic buttercream. A hint if you want black buttercream – add a bit of cocoa along with the black food coloring. 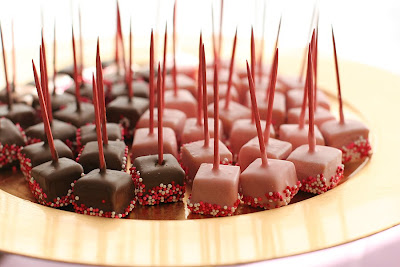 I also needed something easy, since most of my time was going into the cake and cupcakes. So I made these dipped caramels. Super easy, since they are just store bought caramels. Take a caramel, stick a toothpick in it, then dip in chocolate, followed by sprinkles. They looked super cute, but I have to admit that they weren’t really a “wow” item. Maybe if I had made the caramel from scratch, but they were easy and they looked good! 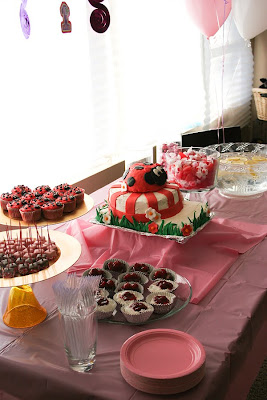 We also had lots of red and pink candy, along with some cake pastries that my mother in law brought. I feel bad that I didn’t really get any good pictures, but the table was up against a window that was super bright, which made pictures difficult. But the party was a success! And lots of fun. It will be fun to see how these parties go as I have more children and as they grow up! 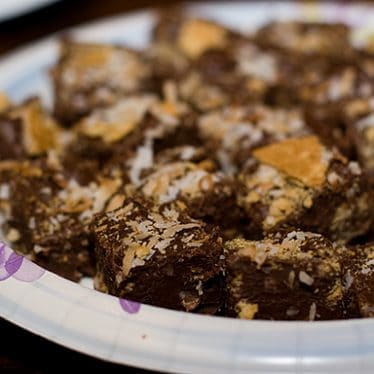